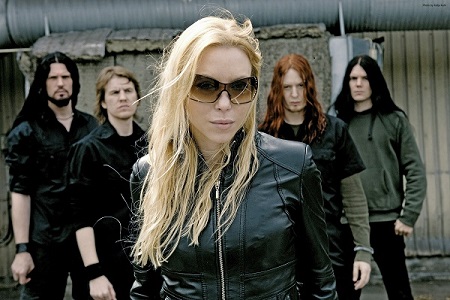 Blistering.com: Do you remember her first audition?

Amott: Yeah, we were working on some new material for Wages of Sin. I think we did some older ones, like some really old stuff. We did “Bury Me An Angel” and “Dark Insanity.” It sounded great. I remember the vocals sounded a lot louder than what we were used to coming out of the vocal PA. She really has some power. We didn’t say “Okay, you’re in the band.” We already booked the studio, so she wanted to try some stuff on the new material. You hear everything a lot more detailed in the studio, and it sounded great. That album [Wages of Sin] is fantastic. I think we wrote some really great songs and with the addition of Angela and doing the mix with Andy Sneap for the very first time, it made it jump out of the speakers a lot more.

Blistering.com: I don’t know if you’d be able to pull this off today, but not revealing Angela’s identity in 2001 must have been a lot easier than it would be now because of the Internet and social media.

Amott: We were recording in Studio Fredman in Gothenburg and I remember there was another band in the studio at the same time we were. I think it was Deathstars. They were recording their debut album and we knew a few of those guys because they used to be in Swordmaster. We shared some space with them; they were in Studio 2 and we were in Studio 1. I’m sure someone probably would have tweeted [laughs]. We were thinking back then that nobody knows this, this won’t get leaked [laughs]. Those were relatively the young days of the Internet. The sheer volume and how much it has picked up the pace has been incredible.

Blistering.com: You can’t do anything these days without it.

Amott: Everything is different now.

Blistering.com: Even the details of a new album, with releasing the songtitles and artwork. That has to be hard keeping it under wraps.

Amott: It is. I remember because I was the guy that was in the record store, looking at the import magazines going through the back for the release date of the new Slayer or Venom album. There was tweeting back then [laughs]. I love the new technology. I said I’d never tweet, but here I am, doing it.

Amott: There’s no point in standing still. I’ve been adaptable to things. I love the old stuff like my old vinyl, but I love my iPhone.

Blistering.com: I was wondering since Chris re-joined in 2007 if things have completely normalized. From an outsider’s point of view, it sure looks that way.

Amott: Yeah, they have. I think especially, it’s very balanced. He’s not a huge contributor of music, but the parts he has are pretty amazing and always crucial to the album. I always enjoy his input. We had some amazing, world-class players in the band when he was out like Gus G. (Firewind) and Frederick (Akensson, now of Opeth), but they weren’t Chris. He has his own touch and when he came back, it sounded in my ears, perfect.

Blistering.com: I’ve read a lot about how self-managed you are. Is it that all-consuming now?

Amott: It’s quite draining at this point, especially for Angela because she does everything. She’s basically managing the band on her own. We talk things through, but she’s running things on the day-to-day basis. We have some business partners in accounting and some booking agents, but Angela is basically the management nowadays. It’s worked out extremely well for us, but like you said, it’s very all-consuming. There’s stuff to do everyday, like emails. It’s hectic before a tour. We might take a break after we tour for this album. I want to take a break from the email war [laughs].

Blistering.com: You were in Carcass when the whole Earache/Columbia Records fiasco happened [where Columbia famously suggested to Carcass singer Jeff Walker that he take vocal lessons after the Heartworkalbum – ed]. Is being self-managed a reaction to that?

Amott: For us, it’s easy because Angela is very business-minded. She has a good head for business and budgets, which I don’t have [laughs]. I write riffs [laughs]. It’s a great combination when you have someone like that in the band and take that on. For us, it has been amazing, and it’s a lot more profitable for us as an organization. The industry is changing so much that I don’t know if I ever see us having an outside management coming with us. I only see us as being autonomous.

Blistering.com: You mentioned taking some time off next year, so much have something up your sleeve for Spiritual Beggars or even Carcass.

Amott: I’m not sure about Spiritual Beggars…I don’t even know what I’m going to do [laughs]. I haven’t had a holiday in years or any time off in the last 20 years. I probably wouldn’t like it. Carcass played a lot for a while. We went all over the place and I’d love to play with those guys again. My happiest moments or some of my happiest moments are when I’m onstage playing guitar. It’s my life. It’s what I always wanted to do and I cherish and appreciate it more and more when I did when I was 20.