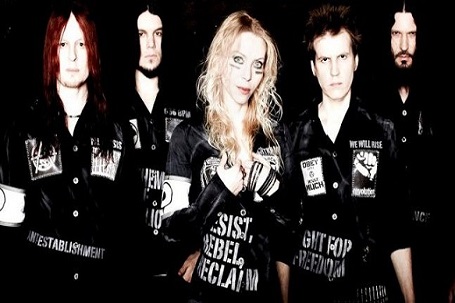 Quite hard to believe that ten years ago, Arch Enemy were a virtual non-factor in the extreme metal scene. Even though they were fresh off their excellent Burning Bridges album (a body of work that some consider to be AE’s finest work), there was something missing from the band’s makeup. Worried that they would fall into the melodic death metal heap, band leader Michael Amott sacked singer Johan Liiva and replaced him with then-unknown German-born singer Angela Gossow. By the time press photos leaked of the sleek and sharp-looking Gossow in the AE lineup, anticipation for 2002’s Wages of Sin was off the charts. And Arch Enemy has yet to look back.

Arch Enemy circa 2011 is now top dawg in the melo death game, attributed to the firepower displayed on 2003’s Anthems of Rebellion and 2007’s underratedRise of the Tyrant. This year’s Khaos Legions merely pushes the band along even further, with a deluge of quick and easy anthems backed by the brothers Amott (Michael and Chris) and their instantly identifiable leads. Simply put, when you hear Arch Enemy, you know it’s them. Plus, Gossow is a much better visual than your standard frontman anyway…

We caught up the affable older Amott on the eve of their North American tour with Devildriver to discuss Khaos Legions, the time when Gossow joined, reliance on technology, and much more. Here’s what Mr. Corporal Jigsore Quandary had to say…

Blistering.com: Since this is album has been in the works for so long, it must be nice to have something new to go out and support, right?

Michael Amott: It feels great! Fresh material, some fresh blood in the live setlist. We were really anxious to get into that creative mood, writing new material, being the studio…it was a lot of fun.

Blistering.com: You did The Root Of All Evil re-make album a few years ago. Did that help stoke the creative juices?

Amott: Kind of. It was frustrating, but it was a cool project to do. It wasn’t a creative project [to do], as we were basically covering ourselves, playing the old stuff again and re-recoding it. It was a motivation because we enjoyed being in the studio, so that made us get motivated to write new material.

Blistering.com: You’ve been putting albums out since the early 90’s with Carnage, then Carcass. Is there still some excitement to releasing an album?

Amott: It’s more of a selfish thing, really. I love creating music. I play guitar two or three hours a day, after all of these years, so there’s something wrong with me [laughs]. I don’t know what the letter combination of my condition is.

Amott: [laughs] I really enjoy it. I think we all do; it’s a passion to write and perform extreme metal music. We were playing exactly the music we want to play and doing it on our own terms. It’s a lot of fun.

Blistering.com: Any consideration as to what songs from Khaos Legionswill make it into the set for the upcoming tour?

Amott: We’re thinking three or four new ones. We’ve been lucky that our fanbase likes hearing new songs from us. It’s not like they want to hear the old songs. We haven’t gotten to that part of our career yet where the fans want to hear just the old songs [laughs]. We’re still in a very fortunate position because we get to go out with some new looks, some new production stuff, and people get to see the new chapter of the band. That’s how we think it should be. We’re definitely going to be play a lot of new stuff.

Blistering.com: Angela has been in the band for 10 years now and it seems like yesterday when she joined. For you, has it gone by quickly, making the change from Johan (Liiva) to Angela in 2001?

Amott: All of those kind of things feel like a long time ago, but in some ways, they feel recent. We’ve been so busy since that time. We’ve never stopped. It’s been one thing after the other. We haven’t stopped to reflect. No time for reflection or self-critique [laughs]. We’ve just marched on and have been very busy as a band, which is what you want. We’ve enjoyed it. We’ve had some real lows and great, amazing highs like any band if you put yourself out there as much as we do.

Blistering.com: You would know better than anyone, so describe Angela’s growth as a vocalist. I saw her on some of those early tours and it looked like she was still getting her feet wet, but now, she appears totally comfortable.

Amott: I think you’re right. With every album, she’s fine-tuning…she’s very serious about it. She’s a very serious person. We all put a lot of pressure on ourselves to perform better and raise the bar. It’s not an outside pressure from the media or the fans. It’s more of a “We want to do better.” I think Angela is like that as well. On the live stage, she’s grown into this fantastic front-person for the band. She can really take a crowd on and put on a good show. It’s really fun to share a stage with her because she has so much presence.

Blistering.com: You can stay off to the side and do your thing.

Amott: [laughs] We’re all attention sluts. We’re all fighting for attention up there [laughs].