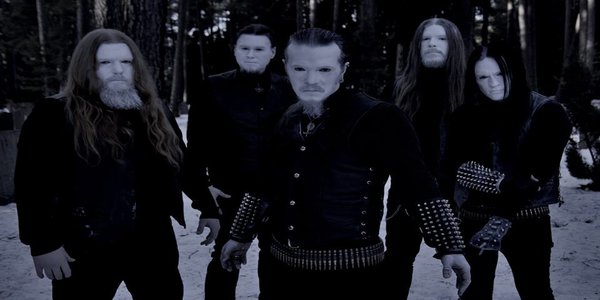 Per the usual, lots of albums and lots of albums with variety to go around for this month’s installment of Rapid Fires, our short reviews column. As we look forward to a busy summer show schedule, here’s what we gabbed about for April: Act of Sin, Archivist, Chasing the Serpent, December’s Fire, Disharmony, Downcast Twilight, Game Over, Grá (pictured), Grog, Hadal, Hexer, Kramp, Mountains Crave, Sangue, and Sunless Sky. 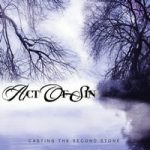 Act of Sin – Casting the Second Stone (Self-Released)
One of those bands that takes bits and pieces from melodic death metal, metalcore, and more extreme sources to put something together, Act of Sin are somewhat of a hodge-podge. Some ripping guitarwork and frantic assaults veer into more ‘core laced territory and unfortunately this is not to the band’s benefit. The clean vocals have a nasally, grating tone to them and seem to miss more than they hit (“6.2” is a notable exception that works well as a whole). In contrast to that, the heavier end of the band feels more consistent, bringing in some melodies that are catchy yet have enough aggression behind them. Casting the Second Stone covers a wide breadth of styles, but some attention should be paid to the cleans going forward to really bring the band to the next level. – Kyle McGinn (Act of Sin on Facebook) 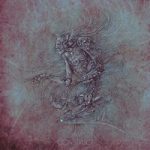 Archivist – Construct (Self-Released)
Post-metal act Archivist have returned with a second album that comes from their concept that revolves around a lone survivor after an ecological disaster. So clearly some ripe subject matter for this type of band. As post-metal goes, Archivist utilize the usual swings in momentum but get some slack in that department due to the sheer beauty that enters the landscape on a frequent basis. Ethereal and haunting atmospheres are the norm, surrounded by some somber cleans. But when it’s time to get heavy, the band doesn’t hold back – tortured screams atop crashing and sometimes massive riffs give just the right amount of juxstposition. While it’s not outside the norms, it’s rather well-done for the style. – Kyle McGinn (Archivist on Facebook) 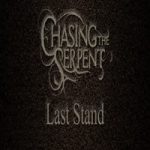 December’s Fire – Vae Victis (Arachnophobia Records)
Certainly not metal, but a worthy artifact of the early Polish metal scene, December’s Fire is the product of Piotr Weltrowski, who collaborated with some band called Behemoth. The style here is synth-dominated, dramatic, Laibach-like sounds, a bit militaristic, but not lacking for dramatics. Weltrowski’s use of synths and soundscapes certainly works in his favor, showing there was more to the Polish metal scene than fire and brimstone. Little did he (or anyone else) know what would emerge a few years down the line… – David E. Gehlke (Arachnophobia Records Facebook) 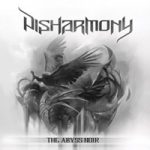 Disharmony – The Abyss Noir (Grimm Distribution)
Starting in 1996 and delivering three demos before getting a debut album in Shades of Insanity out for 2014, the stick-to-it mentality for Greek band Disharmony is admirable. The Abyss Noir as the follow up intersects at progressive meets doom/heavy metal riffing, tempos, and melodies – imagine a Pete Steele-ish meets lower register Warrel Dane vocal presence against music that can be Nevermore or Iced Earth one moment, then sprinkle in nuances of Opeth or Voivod and you understand the quintet’s unique outlook. “Vain Messiah” features jaw dropping lead arpeggio tradeoffs, while “This Caravan” traverses jagged, catchy riffs and atmospheric twists and turns from the potent rhythm section. Don’t know about the cleaner, accented vocals on their “Disposal Heroes” cover working out as well as the Metallica original – but not too bad of a diversion of you want progressive heavy/doom-oriented metal that isn’t of the norm. – Matt Coe (Disharmony on Facebook) 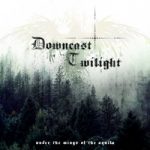 Downcast Twilight – Under the Wings of the Aquila (Stygian Crypt Productions)
Folk metal upstarts Downcast Twilight are here to make a statement with their debut Under the Wings of Aquila. While it might not be a huge statement, it says enough about the band moving forward to garner some future interest. Sitting at the heavier and more serious side of the folk divide, the approach is brutal enough to win over the death metal converts while the implementation of violin and keys are strong enough to keep the more melodic fans intrigued. It makes for an interesting combo, even if it’s a more tried-and-true one. They stick towards the mid-tempo but it does work best for the style, allowing for a strong merger between the riffs and folk elements. Let’s see how they grow with their next release. – Kyle McGinn (Downcast Twilight on Facebook) 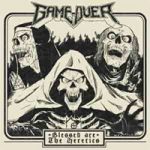 Game Over – Blessed Are the Heretics (Scarlet Records)
Fresh off successful touring ventures in the US and China, Italian thrash band Game Over issue a six song EP – featuring one new song for the title cut, an Italian language version of a previous song from Burst into the Quiet, three live songs and a Dead or Alive cover of the big hit “You Spin Me Round (Like a Record)”. Energetic delivery, pumping bass, and a unique thrash re-interpretation of an 80’s classic make this probably most endearing to those already a part of the fold. The title cut at 6:36 gives listeners the progressive and varied tempo shifts available to the band, although Renato Chiccoli’s hoarse Hefield-esque accents and gang background support bring it back to familiar crossover thrash underpinnings. The future looks bright. – Matt Coe (Game Over on Facebook)

Grá – Ramsvarta Tankar (Carnal Records)
Grá happens to be the band Dark Funeral main dude Lord Ahriman plucked vocalist Heljarmadr from, so almost instantly, there’s a bit of credibility here when discussing this Swedish BM ensemble. With two full-lengths already to their credit, the two-song Ramsvarta Tankar is simply a stop-gap measure prior to the band’s next LP foray. While the title track seethes and brims with off-kilter drumming and manic riffing, it’s Grá’s cover of Lord Belial’s “Osculum Obscenum” that makes this quick release worth releasing. Throwback black metal at its finest, ripped right from the glory days of the ’90s. –David E. Gehlke (Grá Facebook) 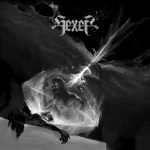 Hexer – Cosmic Doom Ritual (Vendetta Records)
A German doom ensemble who came into being in 2014, Hexer’s unique brand of doom may take forever to sort itself out (long songs, long intros, longer riffs), but the band’s earthly, totally vintage sound eventually gets going. Their Cosmic Doom Ritual EP clocks in at three songs and over thirty minutes, giving those pregnant pauses, cymbal crashes and vocals exhumed from the depths plenty of time to do their thing. Turn off the lights and perhaps Hexer will have an even greater effect. Surely these gents are wrecking rooms (and ears) across Germany. – David E. Gehlke
(Hexer Bandcamp) 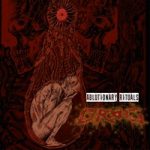 Grog – Ablutionary Rituals (Murder Records)
Brutal and savage deathgrind that shows no signs of remorse or compromise pretty much sums up Ablutionary Rituals. Short (most songs are in the 2-minute range) bursts of explosive riffs and guttural roars are par for the course, but they do toss in some little goodies from time to time to keep you on your toes. It could be a swerve in tempo, a particularly assaulting (or melodic) riff, or a moment where the bass gets to shine. Regardless, the energy keeps rolling on this one and the overall playtime keeps it from outstaying its welcome. – Kyle McGinn (Grog on Facebook) 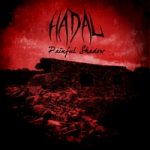 Hadal – Painful Shadow (Sliptrick Records)
Reveling in the gothic tones and Katatonia-esque gloom, Hadal also build up to a darker and doomy/deathly tone. Unsurprisingly, these two divisions within the act use both clean and growled vocals, but the overall tone and blend of the music makes it worth investigation for those who like the style. There’s more of a gothic flair here than many bands have, which gives it some room of its own, with some genuine emotion flowing on cuts like “Dying Fall.” Then the occasional heavy insertion flows well, and gives some additional dynamics. Worth keeping an eye on these guys. – Kyle McGinn (Hadal on Facebook) 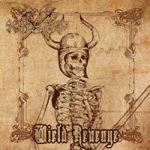 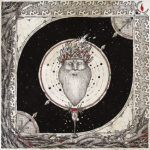 Mountains Crave – As We Were When We Were Not (Avantgarde Music)
There’s your alliteration-happy album title of the year, eh? Hailing from Leeds, England, Mountains Crave, in spite of their somewhat dubious title, present a formidable U.K. black metal front. While not as susceptible to the melodic windscapes of some of their contemporaries, there’s a particular over-arch of darkness presented here; the riffs are clearly unforgiving; same with the arrangements. “Clear Light of the Void” gets the nod as the most impactful number of the bunch, a trailing, harsh shove into the most extreme realms dug up from the English countryside. – David E. Gehlke (Mountains Crave Facebook) 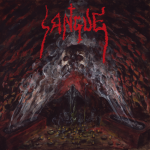 Sangue – Sangue 7″ EP (Nuclear War Now Productions)
Really just an unrelenting primal (concrete) sledge of blackened death metal, blurring, then destroying the lines (literally and figuratively) between anything in its path, too. A caustic combo from Rome, Sangue has nothing else to their credit besides the two songs found on their self-titled two-song EP. With a raw, almost haphazard production job and a billowing array of brash riffs, Sangue is yet another old-school loving band who would love nothing more than the send metal back to the dark ages. Surely plenty would go along with them. – David E. Gehlke (Sangue Bandcamp) 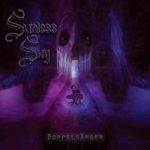