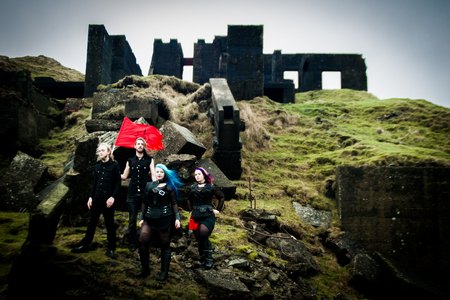 Another month draws to a close and another begins. Being that the spring rush is in full effect, there’s plenty of material out for your listening consumption – provided you are willing to do some research. For those that don’t have quite as much time, allow us to do the honors and give you another batch of quick reviews to separate the good, bad, and the ugly. This month we investigate Apokalyptic Raids, Black Mood, Cardinal’s Folly, Crematory, Dakesis (pictured above), Dead River Runs Dry, Demise of the Crown, Destroyers of All, Ian Perry’s Rock Emporium, Ides, Messenger, Nymphill, Phalloplasty, Salem, and The Hypothesis. 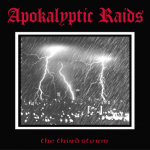 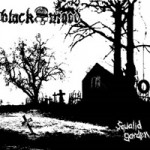 Black Mood – Squalid Garden (Daredevil Records)
An Eastern German two-piece act bringing their take on southern sludge metal for their 7 song full-length Squalid Garden. Between guitarist Sleaze’s feral Anselmo-esque vocal bark and Izz’s doom /swing slam propensities Black Mood soaks in the Down/Crowbar swamp factor that makes both low tuned addictive. C.O.C. fans will love “IWNAR”, while the feedback-oriented “Lethal Injection” has a touch of that noisy crossover slam that causes body carnage at live shows. Proof that even non-Americans can take doom/sludge metal to the underground masses, as the duo beat you into 27-minute submission. Sir, may I have another? – Matt Coe (Black Mood on Facebook) 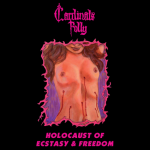 Cardinals Folly – Holocaust of Ecstasy and Freedom (Shadow Kingdom)
A degree of hokeyness exists with Cardinals Folly, not just because of the odd title to their third album, but also the manner in which Mikko Kääriäinen patterns his vocals. The band is Finnish, but no doubt regular punters would take one listen to his animated, un-sober caw and you’d think the man was an American. Nevertheless, the trio purveys a simplistic, relatively bland take on doom with Holocaust of Ecstasy and Freedom. The riffs meander about with no purpose, the tempo never takes a jump, and of course, Kääriäinen keep coming back for me. Limited to those who fancy doom stalwarts Reverend Bizarre and Electric Wizard, Cardinals Folly will have a difficult time finding an audience beyond fans of those two. – David E. Gehlke (Shadow Kingdom Bandcamp) 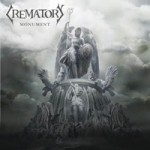 Crematory – Monument (SPV)
Early leaders in the 1990’s gothic metal movement (Awake a personal favorite), German band Crematory stylistically have shifted to a more commercial oriented, industrial-electronic charge on the past few outings. Monument is their 13th studio record, splitting the material between German and English tracks – also delving into addictive heavy grooves at times on “Haus mit Garten” while pushing back into their gothic metal legacy through stirring guitar refrains and keyboard hooks for “Die So Soon” and “Nothing”. Some may struggle with the obvious modern / industrial groove passages on “My Love Within” and Rammstein-like follow up “Die letzle Schlacht”, so be sure to seek out a track or two to make your final determination on appeal. 25 years strong, applaud the versatility. – Matt Coe (Crematory official website) 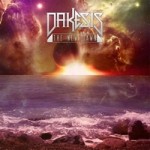 Dakesis – The New Dawn (CapsAArx)
Following up on 2011’s Trial By Fire, The New Dawn is a sprawling 78-minute epic journey of power/progressive metal. Strong vocals from Gemma Lawler lead the way, with a great balance of progressive riffing/leadwork that stands out without being overbearing. Despite the length, things are held together well, with no lulls in the action, courtesy of the band’s ability to vary the tempo, from the fast and heavy (“Destined for the Flame”) to the more introspective (“Autumn”). 17-minute centerpiece “The Seventh Sky” does a great job of putting everything into one track, from leading keyboards to acoustic guitar to catchy melodies. Dakesis seems ready to compete with the big names of the genre with what they’ve done here. – Kyle McGinn (Dakesis on Facebook) 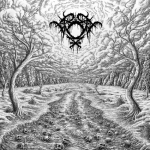 Dead River Runs Dry – Hierophants of the Storm (Static Tension)
An Australian “kitchen sink” lot, Dead River Runs Dry is all over the map, but forceful at the same. Their Hierophants of the Storm debut was recorded without the usual, modern day benefits of triggers and production polish, but a ragged effort this is not. Instead, the black metal-inspired “Skull of the Wind” rocks back and forth being gurgled vocals and a spate of riffing that Satyricon would find of interest. The band goes one step further on “Revenge Upon Fate,” the album’s most Scandinavian number, which would normally sound out of step for an Australian band, but not with Dead River Runs Dry. – David E. Gehlke (Dead River Runs Dry on Facebook) 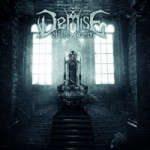 Demise of the Crown – Demise of the Crown (Self-Released)
Some traditional sounding heavy metal that isn’t afraid to emphasize the heavy can be found with Demise of the Crown. A little late to the party with this one, releasing back in March, but it won its spot due to the mixture of heavy metal elements that hit a bit harder than some of their contemporaries. The riffing tone sometimes moves into melodic death metal territory and Darren Beadman uses some screams alongside his soaring clean vocals. It’s full of hooky guitar riffs in addition to the vocals, and there are plenty of fiery solos that will wow you as the album progresses. A must if you dig Nevermore or Symphony X, with a more modern flair. – Kyle McGinn (Demise of the Crown on Facebook) 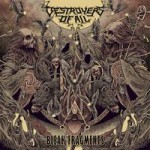 Destroyers of All – Bleak Fragments (Mosher Records)
Always pleasant to hear a band that doesn’t easily write themselves into a box. On Bleak Fragments, you can hear plenty of thrash, technical death, progressive,and even some black metal tossed in. With the spectrum of influences at such a large number, it makes for an interesting listen but it’s not without a few hiccups. Occasionally the band is subject to an off-transition but things land much more often than not. From the bombastic synths on “Hollow Words” to the thrash groove of “Speed of the Mind” to the melodies of “The Pain that Feeds,” there is a wealth of material to take in and explore. With some additional polish, their next album should be a real killer. – Kyle McGinn (Destroyers of All on Facebook) 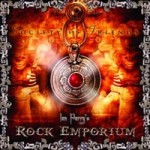 Ian Parry’s Rock Emporium – Society of Friends (Escape Music)
Ex-Elegy/current Eternity’s End powerhouse vocalist Ian Parry is back with a 10 song back to melodic classic heavy roots album for Society of Friends – including players from Delain , Gypsy Rose, and previous Consortium Project musicians among others. Larger than life choruses, exemplary guitar hero leads (check out Christian Münzner’s work for instance), and a solid AOR/ bluesy foundation makes “Ministry of Rock” and “Start All Over Again” go down a storm for people who miss 80’s-oriented Bad Company, Boston, or even passages that could be close to Whitesnake. Any fans of this man’s voice would savor this back to roots record. – Matt Coe (Ian Parry official website) 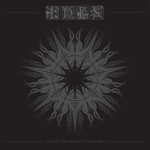 Ides – Sun of the Serpent Tongues (Vic Records)
Holland doom outfit Ideas make clear pretty early on with Sun of the Serpent Tongues that they’re going to make the album a real slog. As in, if we’re talking about utterly turgid, immobile, un-happening, early ‘90s-influenced doom, then yeah, this would be a direct hit. By slamming one uninteresting, doom-derived riff after the next, Ides create an album without much identity or excitement. Not that they’re necessarily supposed to be jumping out of the speakers, but Sun of the Serpent Tongues feels about as cohesive as a lazy Sunday afternoon practice after everyone has returned from lunch break. – David E. Gehlke (Ides on Facebook) 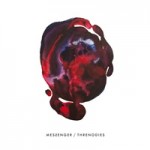 Messenger – Threnodies (InsideOut Music)
London, England gives us another intense progressive/psychedelic hard rock act to champion in Messenger. Heavy, robust chords that Sabbath-heads praise against Uriah Heep/Pink Floyd organ pulsations make “Oracles of War” an early favorite, while the band interplay on the laid-back, bluesy “Celestial Spheres” is no less impressive, vocalist/ guitarist Khaled Lowe equally progressive in his psychedelic, smooth phrasing against the shimmering musical construction. Acoustics factor in from time to time, but this is a 43-minute platter that’s throwback in tones and philosophy while forward thinking in heaviness and aural dynamics. Threnodies as Messenger’s second full-length aligns well with those in need of more 70’s progressive hard rock that’s also groovy and not too brain crushing. – Matt Coe (Messenger on Facebook) 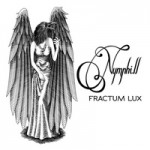 Nymphill – Fractum Lux (Self-Released)
Nymphill’s newest release following a 2012 demo, Fractum Lux, has some broad appeal going for it. Melodic metal that occasionally moves into slightly heavier territory, with a focus on riffs (instead of the symphonic elements) is the key factor that sits right beside vocalist Andżelika Mrozowicz’s easy-on-the-ears vocals. “Victoria” is the standout, opening up with some near thrash riffing and containing some great leads, but “Cisza” is equally appropriate if you are looking for a showcase for Mrozowicz’s vocals. A solid, start to finish affair, those into melodic metal would do wise to give Nymphill a spin. – Kyle McGinn (Nymphill on Facebook) 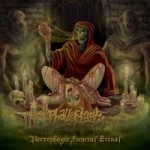 Phalloplasty – Necrophagic Funeral Ritual Redux (Gore House Productions)
A re-recorded edition of the band’s first album, released originally in 2012, it seems an odd candidate for such treatment. One of those cases where you can figure out all you need to know about the music from the brutal band name, cover art, and album title, Necrophagic Funeral Ritual is nothing you haven’t heard before. Slamming brutal death at it’s essence, for better or worse. Furthermore, the album sags a bit due to the way too high in the mix vocals, which completely mask the rest of the band when present. Hard to really get to excited about this one – it just feels a bit old hat, even for genre die-hards. – Kyle McGinn (Phalloplasty on Facebook) 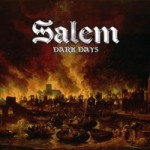 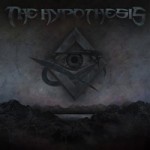 The Hypothesis – Origin (Inverse)
Finnish melodic death metal with plenty of keyboards. Sounds like a winning formula if that’s what you are into. Sure enough, The Hypothesis have the chops to make a solid album of melodeath goodness. The synths are pretty prominent and futuristic sounding in tone, but they fit beside the melodic riffs quite nicely. Especially on a faster track such as “Scarface,” which sees the two sides complimenting each other by adding some depth to some real pit-inducing riffs. There are some clean vocals (see “Atonement”), but most of the attack comes in growled form – allowing the music to stay heavier in the long run. While it sticks to what works best in the genre, it doesn’t really go outside it much either. Perhaps with album number two. – Kyle McGinn (The Hypothesis on Facebook)