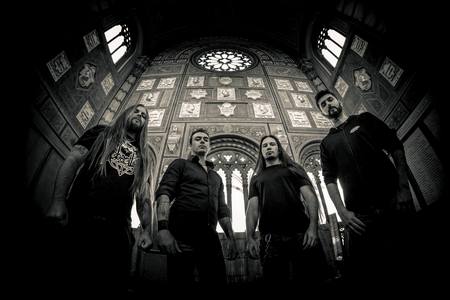 Though there may be many who raise the flag high for brutal death metal, it’s not always an easy task. People demand a ‘pure strain’ so to speak, keeping things brutal and visceral from beginning to end. But at the same time, you can’t offer up a 12-song release that sounds like slight variations on one song either or you’ll be called out on it. Italian death metal masters Antropofagus have mastered this craft over the years, and most impressively so on their latest release, Methods of Resurrection through Evisceration (M.O.R.T.E.).

M.O.R.T.E. is simple in execution but more than what it seems. Pummeling riffs and thick grooves stay strong from beginning to end, never faltering in their unending wave of destruction. But somehow it’s memorable at the same time. So we fired off some questions to guitarist Francesco “Meatgrinder” Montesanti to get his perspective on what the band does.

Dead Rhetoric: The group split in 2002 but then rejoined back in 2009 – where did the decision come from to restart things initially?

Francesco “Meatgrinder” Montesanti: Because Antropofagus had been interrupted for personal reasons, while the project had yet to carry out its life. We consider Anthropophagus a new band born in 2010 as this band has been around much longer now, instead of the old band which only lived two years.

Dead Rhetoric: Was there any reason for the 5 year absence between Architecture of Lust and M.O.R.T.E.?

Montesanti: No particular reason, we would like to have more output, but our own lives prevent us from doing so. For the next album I absolutely want it to be closer to this release.

Dead Rhetoric: How do you feel that you have changed or evolved as a band over the years?

Montesanti: Surely changed; the sound is deliberately warmer and deep. I wanted a more direct approach with the listener but without losing our character of aggression and speed. No evolution; I prefer emotion and not evolution.

Dead Rhetoric: With regard to your overall sound, what’s the most important factor that defines Antropofagus?

Montesanti: Probably my very instinctive way of composing music, although in recent years I have surely made friends with the metronome and made time more linear than the first album.

Dead Rhetoric: What goes into the songwriting in order to keep the intensity high, without making it feel like you are hearing 10 versions of the same track?

Montesanti: This is a great question, it often happens to fall into a monotone or similar track, and it requires very well arranged scheduling work and many track tests before making any changes or metrics suitable. An important key is to make the track with a square structure and a “chorus” to give a hard blow to the listener but leaving the mark in their head.

Dead Rhetoric: Could you give some background into the stunning artwork for M.O.R.T.E.?

Montesanti: M.O.R.T.E. is a journey to the reign of revival through evisceration, living in another world through an evolution that passes through death, which served a very deep and profound picture. We found Daniel Corcuera, gave him an idea of vision and out came out a small masterpiece. We are very proud of him and our work.

Dead Rhetoric: What compelled you to do a cover of Malevolent Creation’s “Living in Fear?”

Montesanti: The love I have for that album. There are seminal bands for us and Malevolent has created Eternal, one of the best albums for us. We tried to make the sound of that song as if it came from us, and the result was a bomb!

Dead Rhetoric: Where does the drive to do brutal death metal continue to stem from after being involved with it for many years?

Montesanti: Just passion and fun, I noticed that I continue to climb on the stage enthusiastically like a fan, and not like a musician; this keeps my passion alive.

Dead Rhetoric: Italy has gotten much more of a presence in death metal in recent years – anything you would contribute this to?

Montesanti: Surely the quality of the bands. In recent years we have been looking for a ransom as a personality and professionalism; in the last years Italy was not seen well, but now things are better. There are bands (without naming anyone) that carry our Flagship with great dedication and great professionalism. Their work is of great quality and many countries have noticed this.

Dead Rhetoric: The band has been inspired by a few horror writers – who are some of your favorites?

Montesanti: At the beginning of our career we were very much inspired by the 80s horror, directors such as Dario Argento, Lucio Fulci, Pupi Avati. Now our lyrics have come to a more spiritual and over-earth stage.

Dead Rhetoric: There’s a lot of crossover between horror and metal fans. Where does that connection come from?

Montesanti: Because it is very easy to match these elements, both as a sound and as a visual. It is very difficult to distinguish between works and bands; personality in composition is very important not to be classified equal and not to fall into a container where there are many equal bands.

Dead Rhetoric: What’s next now that M.O.R.T.E. has been released?

Montesanti: We have to try to promote it, but this has become very difficult, as there is too much power on the agencies and money. This is not part of our policy and we try to swim in this sea without drowning. We can only hope that our work will be appreciated and earn a small place in the heart of those who also listen to a stage in order to bring our music to those who appreciate it. 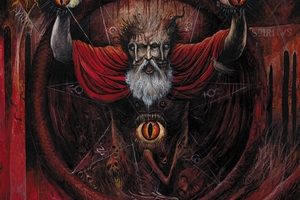