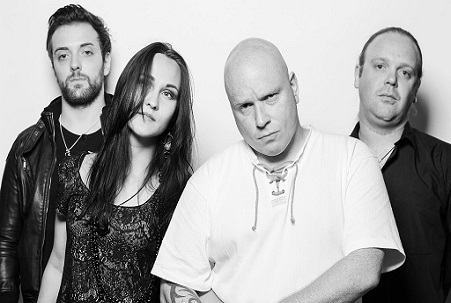 Dead Rhetoric: “Monochrome” is another that stands out. Could it be the heaviest song you’ve done? Plus, the female vocals courtesy of Vic [Anselmo] are fantastic.

Moss: Yeah, Vic did a great job, especially on her ad-libbed parts at the end of the song. Despite its simplicity, “Monochrome” was actually a really hard song to write, and once the writing process was over the instrumentation took another lifetime to finalize. I must have gone through ten demos before I settled on the final version.

Dead Rhetoric: You stated in advance what the theme of the album was, so I’m curious, how much did society’s current fascination with the Internet have a part in it? As in, people can hide behind their computers without presenting their actual “identity.”

Moss: Cyberspace didn’t enter into it, this is all specifically about being out there on the frontline, faced with the masses and then quickly making the decision to fall into line. It’s about us as a flock, face to face with mirrors of our own selves and then syncing–in without thought, and the problem that behaviour presents if the dominant mindset that the individual mindlessly adheres to is spiritually and ideologically corrupt.

Dead Rhetoric: Any plans on working with Danny Cavanagh again?

Moss: No plans, no. The Anathema thing is something I need to distance myself from. I’m taking conscious steps to move away from all of that and have been doing so for the last five years. Anathema have, like any established band, hardcore fans for whom nothing else will compare, this comes with time and with exposure. It’s all a part of the fan/artist scene, it happens, its natural. I’ve been there myself, in my years I’ve been obsessed with Iron Maiden in my teens, with Yes through my twenties, and when you get stuck on a band there’s only that band that exists and nothing else comes close.

A problem now is that the Anathema obsessives of yesteryear who grew up in their bedroom with The Silent Enigma, Eternity or even Judgement, some of them now work in the industry themselves as journalists, and they find it very hard to write about Antimatter without simply using that as an opportunity to fangasm about Anathema, which I find incredibly unprofessional. I’ve seen some ridiculous reviews in my time, be it album reviews or live reports. One guy came to a gig in Paris and his review mentioned Danny Cavanagh in almost every paragraph (despite Danny not even being there), he barely talked about Antimatter and ended the review with mentioning that he was very much looking forward to Vincent and Danny’s scheduled Parisian gig a few months later. I was very much like, “Come on mate, do your fucking job. Do your job. You’re a journalist; get your facts right, write about the matter in hand.”

It seemed a while back that everything I released or performed simply got judged by some fanboys standards of his own favourite band, and how the fuck can you win in that situation? Luckily the reviews of Fear of a Unique Identity acknowledge that Antimatter exists in its own orbit, but it’s been a long hard slog to get here.

Dead Rhetoric: Obviously, Antimatter isn’t a metal band, but you’ve garnered a lot of support from the scene. Are you finding that metal fans are pretty accepting of your work?

Moss: Some are, yeah. It’s pretty hard to generalize. Antimatter has a lot of facets, and a certain heaviness is one of those facets, which will of course attract metal fans. Metal is one thing, though, and Antimatter is lots of different things all wrapped up. In my lifetime I’ve been into and influenced by lots of different music, been through lots of different phases, and all of this bleeds through into the music. I’m not trying to be one thing, or trying to fit into one particular genre like a hell of a lot of bands do in order to feed off an already established fanbase who are hungry for more of the same. I’m simply celebrating all of the great things I’ve heard and felt in my life and wrapping it all together. So there are a lot of elements in there and therefore the music should be appealing to people of different musical tastes.

Dead Rhetoric: Suffice it to say, will it take five years to do another new album?

Moss: I doubt it, but I won’t record an album unless I feel I have a set of tracks that are absolutely worthy of being recorded, there’s no point in doing it in halves! So, who knows how long it will take for me to be in that position again where I am ready to go in and set a new album down. That said, I’m pretty sure it won’t take another five years… the target at the moment is 2015 for the next Antimatter release.

Dead Rhetoric: Finally, what’s on the agenda for 2014?

Moss: After finally launching the Antimatter electric band this year I will be performing the Leaving Eden album in its entirety throughout 2014. It’s incredibly rewarding to be finally playing the music as it was intended, and I know the fans feel the same way. I have a strong and dedicated band behind me made up of past and present Antimatter album session musicians. I will also release the new Antimatter single “Too Late” which is kind of new and also kind of old, in fact very old … it was originally written and conceived in 1996 and I know this is one of my early tracks that caught the attention of Duncan (and also Danny Cavanagh) back in the day before Dunc left Anathema and before he came up with the idea that we pool our songs together for Antimatter. It’s been a very surreal experience working on the track, which I think is actually the second or third song I ever wrote.

I will also be contributing guest vocals to a few projects and also launching a side project called Sleeping Pulse with a debut album titled Under the Same Sky. And on top of that I will be recording demos for the sixth full length Antimatter album The Judas Table. I had two lots of painful surgery over the last six weeks and the recovery from both has been pretty brutal, the whole experience though has given me a new lease of life and energy, and I’m very much appreciating my life and the people around me right now. I have nothing but positivity with which to move onto the next stage of my work.