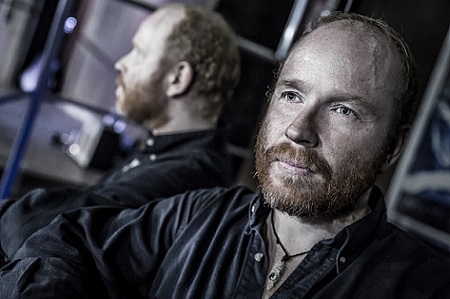 Dead Rhetoric: You’ve had some pretty remarkable staying power considering you and Duncan [Patterson, ex-Anathema] started the band 15 years ago.

Moss: Not really. We’ve just sort of languished at the bottom. [laughs]

Dead Rhetoric: I think you are selling yourself short, Mick.

Moss: [laughs] I think I’m just being modest. If you call it staying power, Antimatter never really got that big. It’s not much of staying power; it’s been pretty consistent.

Dead Rhetoric: We referenced “Hole,” and I must say, it’s one of your best compositions ever. How did it come about? It’s just you out there – was it one of those that came fast?

Moss: That was a pretty quick one. I’m not really sure I have too much of a recollection of writing it. I think it kind of burst out. That was probably in 2004. It’s a real old one. That could have easily gone on Planetary Confinement. Had Duncan decided to not come and finish his half of the album, I already had five or six songs ready. It was “Comrades,” ‘Hole,” and “Conspire” from Leaving Eden, and “A Place in the Sun,” all of the acoustic ones. “Hole” that was a prediction, without going too much into it. There was this guy through no fault of my own, came into my life was there for 15 years or more. He was just a complete, unnecessary asshole. He had no empathy for me at all. I kind of wrote this song for him about his future because I knew he would struggle as he got older. It turns out he did struggle terribly as he got older. It came true.

Dead Rhetoric: The line that gets me is from “Stillborn Empires,” which is “It’s a business doing pleasure with you.” When did that line hit you? That could pop up on a t-shirt one day.

Moss: It’s already on a t-shirt!

Moss: The song was written about sex and business, and women using sex as a means to progress through business on a career level. That was all spurred from a passage I read in a sociology textbook which identified women who behaved this way as actual prostitutes, even though people wouldn’t readily associate them as prostitutes, and neither would they themselves. Nevertheless, they’re using sex to achieve an economic status. Therefore, it’s textbook prostitution. I just applied that song to two females from my history who both behaved that way. “It’s a business doing pleasure with you,” I think that just popped out. I thought, “Ah, brilliant.” I like a good climax. It sounds great live; we were doing it tonight.

Dead Rhetoric: The album cover – you’ve gotten a lot of comments about it. The reaction has been mixed. Did the variety of reactions and comments surprise you?

Moss: [laughs] That really did surprise me. People were just saying “It’s crap.” I’m like, “Alright.” I don’t think people should really expect an Antimatter cover to be particularly nice, you know? I’m talking about a lot of nasty things. I always have done that. I think a lot of it is a crossover from the Antimatter and Anathema fans. The Anathema fans have been conditioned to have all of this “nice” stuff, bedeviled and nice covers, and nice songs, and nice lyrics. And they see something that’s not nice, and they go, “Oh, that’s not nice!”

I’ve been wondering why. A lot of the women don’t like to see a kiss portrayed as anything other than romantic. That’s repulsed a lot of the women. A lot of homophobes have been twitching because the people who are kissing appear to be the same.

Dead Rhetoric: They look genderless to me.

Moss: They’re androgynous. That’s what I said to Mario – I don’t want to go easy route of one man and one woman. Then we’re talking about betrayal within a heterosexual relationship. There’s always betrayal between guy and a guy. People can betray each other no matter the sex. We had to get rid of the gender completely. On the whole, people just failed to get the concept. To me, it was such a readily available concept. I thought everyone would look at it, and go, “Oh God, that just describes the last ten years of my life.”

Dead Rhetoric: One comment I read had a guy draw up some religious connections based on the album title, as well as some of your previous song titles. But you’ve never struck me as a religious band.

Moss: I’ve been asked that a few times about the connection between the religious words…there’s never been iconography to religious imagery. There was a crucifix on the first album, though. I write in metaphor. A lot of the biblical stuff getting banded around today bleeds into my sub-conscious and into my list of possible metaphor use. I’m not religious; I’m not an atheist. I guess you could say I’m agnostic. I don’t know. I don’t like to say. I certainly don’t subscribe to the whole Christianity thing…it’s too cartoony. It betrays the laws of physics and common sense.

Dead Rhetoric: On a more lighter topic, at this point in your career, which type of live show do you prefer: By yourself, or with the whole band?

Moss: I like both, but the exclusively acoustic shows, that for me, has started to become a real fucking drag. At the end, I’m mostly like, “I can’t do this anymore.” Then I just settle and say, “Okay, I’m never doing another acoustic festival.” You get up on the big stage and you sit down…it should be, “How the fuck you’re doing?” [mimics drums] But instead you pick up an acoustic guitar and start picking away. There’s a real sense of anti-climax. The acoustics work best in a club or pub. All I ever wanted to do is feel the drums pounding, the lead guitars screaming, and the bass pumping. I formed the live band based on people who have guested over the years on the albums. There’s a connection between the guys who I’m onstage with. I can’t stop now. I’m loving it so much. It’s working so well. From that, I’ve managed to be able to say I’ll get back up and do a few acoustic tours. I can appreciate that for it is. I still find it a little boring after 45 minutes. You can see people starting to nod off. [laughs]