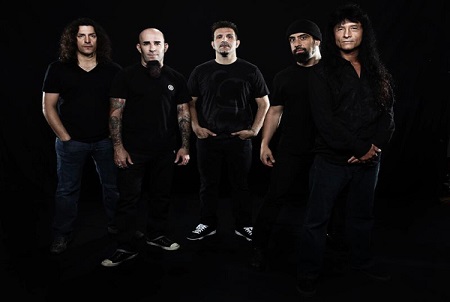 Blistering.com: As for the Big 4 shows you did the past summer, what’s the vibe been like? Everyone has always seemed to like Anthrax; there’s no bad blood of old between you and any of the bands.

Bello: It’s always been great since the inception of this, starting with the dinner that the Metallica guys put together. That was the start of it all, just bonding again. The vibe on this one is great, which is why it continues. We made it this far, 30 years into this thing. We’re 30 years into this kind of music and we’re playing Yankee Stadium. I’m just putting it from a fan’s perspective: I love this music, I love the other three bands we’re playing with. It’s still relevant and we’re able to play Yankee Stadium…I thought when we headlined Madison Square Garden on the Clash of the Titans tour [in 1991], I thought that was the biggest thing. I think it’s a great vibe. Everyone knows what works and it’s a good combination of bands. There’s a whole new generation that is finding out about it now, like 15 or 16 year-old kids that are coming out with their dads or brothers. That’s a great feeling, like you know it’s turning over.

Blistering.com: Even with the new album sounding the way it does, hopefully you will be able to continue to tap into that young market.

Bello: I see that in my clinics. The ultimate compliment for me is when a kid comes up to me and says, “My dad played me your records and I want to grow up and be a bass player like you.” It’s like, “Oh my God, thank you!” I see it right in front of me. I want to pass the torch because I want to give people the gift of music. I have a five year-old son and I think it’s important to have music involved in your life. I’m really thankful for it.

Blistering.com: You just mentioned the Clash of the Titans tour. That must bring back some fond memories. What do you remember most?

Bello: That was a crazy time. As usual, we’re all friends, but with Alice In Chains opening…it was incredible. I was on the side of the stage every night and God rest his soul, Layne [Staley], he was an incredible frontman. He had the gift. I’m still good friends with those guys. It’s funny, that thing, nobody expected it to happen, the Clash of the Titans. We had the Public Enemy thing [i.e. “Bring the Noise” – ed], and that’s the great thing about Anthrax – you don’t know what we’re going to do. I have a fun time trying things out. We never corner ourselves into one thing.

Blistering.com: After that, the 90’s were a bit rough for you, and everyone else. It’s that one of those things where you take your lumps and have some lessons learned?

Bello: Definitely. You gotta remember, a band like Pantera carried the torch. They were good friends of ours, love those guys, Dimebag, God rest his soul. Dime was the sixth member of Anthrax; he played on the last three records and we considered him that and he did too. There’s actually a song on the new record, “In the End” that’s about Dime and Ronnie James Dio that’s a thank-you to them for inspiring us. They carried the torch, Pantera. We had a bunch of great tours with them…lots of drinking [laughs]. I’d come home from tour and be like, “Oh man, I got to slow down. That was rough.”

In the 90’s, that was tough. You had grunge, but everything comes in cycles. To this day, no one has a clue about record companies. No one knows how to sell records, people download them for free. Nobody to this day has a plan. It’s really sad that all of these big gurus with all the brains and money can’t figure it out. Albums sales quite honestly, don’t mean anything these days. People are going to get the record no matter what. We knew that going in with this record. Thank God we have the good reviews, but with this record, we don’t the sales or anything. We know that a lot of people are going to hear it.

Blistering.com: One last thing on the 90’s – I thought you guys adjusted better than most of your contemporaries, especially when John Bush was in the band. Were you surprised they didn’t do as well as you hoped?

Bello: It’s nobody’s fault. All the people that signed us to Elektra Records were fired, straight-out. It was happening at a really bad time, we couldn’t believe it. That’s the history of Anthrax, sometimes you get lucky, sometimes you don’t. That was unlucky time because we had all of this momentum going and when someone comes in and takes over a record company and doesn’t see things your way, you’re on the backburner. That’s exactly what happened. That’s the truth, it happened. You fall off the horse, dust yourself, and get right back on.

Blistering.com: What’s the approach for this record in terms of North America? I know you have the Testament and Death Angel tour coming up.

Bello: Right. That is the tour that is being booked right now and will happen in October/November. In December, we’ll go to Japan and Jakarta. Then in the new year, it’s anything goes. We’re going to work the record, that’s for sure. It’s the right timing and everything else. I hope people come and see us.