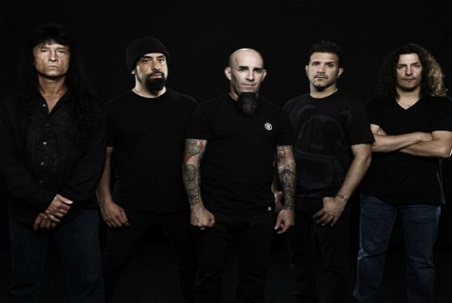 “The words ‘You have a new a record.’ You have no idea how good that feels.”

And so this was how Blistering’s chat with the totally affable Frank Bello began. Anthrax’s energetic (and usually mouth agape) bass player has a lot to be excited about, namely the release of Worship Music, the band’s first studio album in eight years. To compound matters, Joey Belladonna has returned to the fold, lending his signature vocals to what amounts to the band’s best album in like, forever. From top to bottom, Worship Music snarls with a hooky precision that Anthrax never quite tapped into while Belladonna was in the band, but that’s neither here or nor there. It’s quite irrelevant at this point.

On the lead-up to the release of Worship Music, Anthrax has their schedule full, with a Big 4 show in Yankee Stadium on September 14 with Metallica, Slayer, and Megadeth, numerous TV appearances, and an impending North American tour with Testament and Death Angel on the docket. You’d be this cheery too if this is what your next six months looked like. We covered a lot of ground with Bello outside of the new record, including the frustrating period after 2003’s We’ve Come For You All, the even more frustrating 90’s, and why he’s stoked to hit the ground running again. Read on…

Blistering.com: Did you ever reach a point where you thought that there would never be a new Anthrax album?

Frank Bello: Just being human you have to ask that question. Being the stubborn New Yorkers that we are, that’s the tenaciousness of Anthrax. It is that kind of band, that New York attitude, the way we grew up, the “never say die.” You know, you fall off, dust yourself off and get back up and go for it. We know what kind of band we are and it’s always been like this since the inception of Anthrax.

Blistering.com: How great is it to hear Joey’s voice again on an Anthrax record?

Bello: As I get older, I look at older and not to sound philosophical or anything, I just think everything is meant to happen for a reason. It’s just the way I feel about it now, just with the trials and tribulations of Anthrax. With Joey coming in and singing, that’s the cherry on top. We had a great record already and he just comes in and blows us away. I don’t know what it is…he’s just amazing. I stand next to him onstage every night and I hear what comes out of him and it’s amazing. Without kissing his ass too much, I’m amazed. It’s exactly what we need.

Blistering.com: The album itself is a great combination of Persistence of Time and your earlier stuff, but you trimmed off a lot of the fat. It’s more direct.

Bello: I think you’ve done your homework and I appreciate that. We know the deal and I have different songs that I like every week. The hardest about going on tour for this record is that everyone in the band wants to play different songs from the new album. That’s a good problem to have. I want to play everything. For me, I’m ready. I’m glad we have a longevity-vibe to the record so people will want to hear certain songs.

Blistering.com: Moving along, you have the “Big 4” show coming up soon at Yankee Stadium.

Blistering.com: Being that it’s in New York and it’s on your home turf, what are you expecting?

Bello: It’s going to be crazy. There’s a big hype to the whole thing, but we have the record coming out the day before. It’s non-stop press.

Blistering.com: And you have the “secret show.” [On September 12th in New York, where Anthrax is performing as Satan’s Lounge Band]

Bello: I don’t know anything about that [laughs]. Satan’s Lounge Band, I hear they cover Anthrax really well. It’s a cool vibe, why not? I heard that the borough of the Bronx named that Wednesday [the 14th] “Anthrax Day.” That’s pretty cool.