Annihilator – Prepare for the Feast Part I 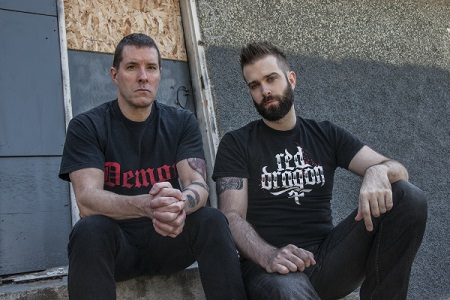 Dead Rhetoric: I wanted to get your thoughts/ memories on a few songs from the Annihilator back catalog. What comes to mind when I mention “Alison Hell?”

Waters: First of all when you say that, I don’t think of the album, I think of the song. That was the second song on the first album. That was the one that really got us attention; it surprised the record label and myself. It took off so well, it is like our “Stairway to Heaven,” you know what I mean? There were a lot of years where we were out of our own country Canada and the United States, since 1993 and continued every year to go over to Europe and Japan and really build a following for all this time. Without that song I wouldn’t have probably had the career that I’ve had. We’ve had at least three albums that were bigger or at least more well-known in different parts of the world, it’s just that North America remembers that album and our second album more, they are the only ones they’ve really heard. With the internet of course everyone can hear more of your catalog, but the majority of people in North America know us for the first two records.

Dead Rhetoric: How about “Stonewall?”

Waters: That was interesting. That was more of a…I like the way that song turned out, we did a video for that song that MTV played out. That had a commercial vibe with more Exodus-like riffing in the verses and it was a weird – the pre-chorus had more of a John Sykes/Whitesnake riff and then a little bit of an AC/DC vibe in the chorus, so it was kind of schizophrenic-influenced riffs put together for a song that actually worked. It did well, it’s definitely not my favorite song because I have at least 130 + songs I could do.

Dead Rhetoric: Next on the list would be “Snake In The Grass.”

Waters: Oh yes. I really like that one. That was a time when in 1993 that was very strange. You have a band with a name called Annihilator, and an album that was very big that came out called Never, Neverland– crazy weird, progressive thrash almost, and then I do a few ballads with some melodic hard rock-style songs. It had an acoustic guitar on it… it’s not the kind of stuff that usually comes out of me when I am writing now. I targeted stuff on this album, I would write riffs and say “Ah, that’s too heavy” for what we were looking at. I like that album because it showed me I could do different things. The tune is kind of fine.

Dead Rhetoric: My last one would be ‘Schizos (Are Never Alone) Part 3” off Criteria for a Black Widow.

Waters: Oh yeah. I don’t really remember much about that now, we haven’t played that track live since 1999 or 2000. When I wrote that song it was for Criteria for a Black Widow, and we had a bunch of members from the early lineup, and I wanted to write another instrumental. It was a two second decision for the title of the song.

Dead Rhetoric: What misconceptions or untruths regarding your work ethic or character would you love to set straight about Jeff Waters the musician, the producer, the mastermind?

Waters: I guess that would be for people who don’t know much about us. One that I always get asked in Canada and the States, we have a lot of new fans and a lot of old school fans and journalists, that have never really heard the band. They heard the first two albums and then haven’t heard anything else. I really wanted it to be a band in the 1980’s, and I had a band when I was putting the demos together, but I found really quickly that I was playing the guitars, and bass, even writing vocals and singing the demos, played drums too and wrote everything. It really was a solo project, and that’s how everything went for the first 25 years – I’d find a singer, then I’d hire a drummer, and hire a bass player and drummer for a tour and that would be a different set of guys. Then I would think about trying this drummer out, Mike Mangini has been in and out of the band with albums and tours, he’s in Dream Theater now, was in Extreme and with Steve Vai. I love working with him as he’s a fun and amazing drummer.

The album after I worked with him, I would find another guy. Artistically it’s awesome to play with different people, but the misconception had been not for Europeans and Japanese people but for the rest of the world that Jeff just keeps swapping out musicians every month, he must be a dictator and hard to work with. That’s a misconception because a lot of the people that we work with, we just have a lot of fun. There were a couple of instances of butting heads and booze/ drug issues, but that is a normal thing when you are dealing with a ton of people, right? But, something happened 10 years ago when I met a guy named Dave Padden who ended up singing and playing guitar for us, and he’s now 50 % of a real band, plus our bass player [Alberto Campuzano] has been with us for a while so it feels more like a band vibe.

It’s weird to have a Canadian band that does four albums in a row from the beginning of their career, each one in different places of the world are huge successes, and each album has a different singer! I don’t think that has ever been done before, and all four successes. After that things went down for 10 years, just enough to keep us touring and going over there, even that… by the time we had done the fourth album King of the Kill and it was successful, I sat back and thought that’s it, it can all end now, I have done pretty good things and I am the luckiest guy of the world. Since 1995-96, literally I take things year by year, album by album, and every single time I get a record deal, I sit back and look at the window and say “Here we go again” as a proud comment. I am lucky and appreciative of the press, labels, and fans that keep us going and endorsements, we have a lot of good guitar companies and amplifier companies who have been behind us.