Angra – Changing the Course of Nature 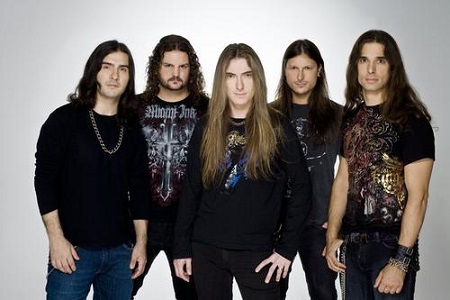 The recent departure of singer Edu Falaschi puts Angra at their second career crossroads. The first, of course, was the 2000 exit of original frontman Andre Matos, who fronted the band during their glorious 90’s run, a stretch of time that saw the Brazilians emerge as their country’s second biggest metal export, right behind Sepultura. Circa 2012, Angra is in a much different spot, having long put the shadow of Matos behind them, thanks in large part to elaborate, conceptually-based albums like 2004’s domineering Temple of Shadows and more recently, 2010’s strong Aqua.

Before the band selects a new singer, the point of emphasis for now will be onReaching Horizons, a two-disc “Best-of” compilation that features both the Matos and Falaschi eras of the band. Already cumbersome, the compilation hits on (mostly) all the right tracks, including flamboyant Matos-era power metal sojourns like “Evil Warning,” “Lisbon” and “Nothing to Say.” The Falaschi is more detailed and extravagant, with brash, elaborate songs like “Spread Your Fire,” “Rebirth,” “Course of Nature,” and “Salvation: Suicide” defining an era that for now, should keep Angra top of mind in the power scene. Moreover, the compilation is reflective of how remarkably consistent the band has been over the course of 20 years, eight years, and two singers. All of this and more was on the docket when we caught up with guitarist/founding member Rafael Bittencourt. Read or “carry on,” as they say…

Blistering.com: How much of a stroll down memory lane was putting together Best Reached Horizons for you? I’m sure you did a great deal of reflecting when compiling the tracks.

Rafael Bittencourt: We had to balance together the wish from the fans of having the top hits, our wishes of what was remarkable from our historic point of view and, of course, creating an nice product from the record companies´ point of view. We ended up with a very nice CD the reaches all of it. We also want always to show the different styles that the band has worked out throughout the years.

Blistering.com: Were there any songs left off that you wanted to include? One could certainly vouch for a few songs off Angel’s Cry like “Time” and “Never Understand.”

Bittencourt: Many songs were left off. We ended up with a format of around two songs of each album. If we had around four songs from each album, I think we would reach better all the very representative songs, but then we would have a double CD and that could be too extensive. We thought of separating three “best of’s,” one with the fast

songs, another with the ballads, and a third one of mixed stuff. We still think of doing another best of with all the ballads for the girls. It is a little frustrating to have only hairy dudes on the gigs [laughs]. Or maybe a “side B” type of best of. We have always the possibility of doing other compilation CDs. I don´t need to be humble on this matter, the fact is that fortunately we have a lot of great material.

Blistering.com: I’ve long held to the belief that Temple of Shadows is a stronger album than Rebirth. Even though Rebirth is your top-selling album, I think you really hit your stride with Temple. What is your take?

Bittencourt: I agree with you. Temple of Shadows is my all-time favorite Angra album. The whole atmosphere of composition and production was totally different. During Rebirth we needed to prove to our fans that the band was still productive and that we could survive without André Matos. We reached gold in Brazil and we were very awarded in Japan with that album. The tour was another great success. So for Temple of Shadows, we were very relaxed and much more confident. We had the chance to explore themes in the music and in the lyrics that we didn´t want to risk on Rebirth. We were in great shape because of the tour etc. All of that made TOS a classic that I love. I´m proud to be deeply involved in it.

Blistering.com: Because Edu has just left, does this signal an end of an era for Angra? Prior to him leaving, were there any plans to do something like this in the works?

Bittencourt: Yes, The departure of the Edu has certainly finished one era and started another. But about the plans for this kind of best-of was on our plans for a long time. Also record companies have been suggesting to us for a while.

Blistering.com: Were you surprised when he notified the band he was leaving? He’s no made no secret of the importance of Almah…was that ever an issue?

Bittencourt: No, I was not. We’ve been discussing this matter inside the band. I have a great personal relationship with him and so I knew about his feelings. Almah was not an issue to me, because we all do different stuff aside of Angra. As soon as the fans see us as versatile and skilled musicians because of other stuff, it adds credibility to the band. I think that the fact that he would never reach the same level of self-satisfaction with a group work than with a more personal project was the issue. He wasn’t simply

happy and that is something that we have to respect.

Blistering.com: Where are you with the new singer search? Any thoughts as to the type of singer you’d like to have fronting the band?

Bittencourt: The most difficult thing won´t be to find a great singer. We have received great videos already. But to find a vocalist that is able to sing the André´s and Edu´s stuff without being a copy of any of them. Also he will need a strong charisma to have the respect and acceptance from the fans. He will be representing the band, so we also need to trust this new guy on a close and personal level.

For these reasons we are preparing a special kind of audition. There will be three stages. During the first stage people will send us a three minutes video. All acapella. During the first minute they sing a Matos bit of a song, the second minute an Edu´s bit of a song and during the last third minute, they will improvise, still acapella style, a melody upon which they justify why they should be the new singer of Angra. The people on the internet will help us select them to the other stages which will be an interview show that will take place here in Brazil. It will be fun to know them better as we present parts of the new songs while these guys take the chance to build the respect from the audience.

Blistering.com: Do you anticipate on having an album totally written, then having the new guy come in at the tail-end, or will you involve this person in the writing process?

Bittencourt: I have a concept that I want to explore, but the songs don´t exist yet. The capability of helping us with the writings is one of the most important qualities that we are searching. If we have four of five good songs there is always room for another four or five songs blending to the new vocalist’s input. I believe it´s important to have a guy who knows a minimum of what is the deal of writing. After all, he will be explaining that to people.

Blistering.com: Because Richard [Confessori, drums] re-joined a few years ago, there are going to be calls for you to re-enlist Andre. Any consideration to that, or is it better to leave the past in the past?

Bittencourt: I´d love to create an anniversary concert for the 20th birth ofAngels Cry. For instance, with the original line-up. Or maybe a DVD for the fans of a big gathering of all the members that have been in Angra. A short festival tour or a DVD is cool. But having Andre re-join for writing together and producing new material is not going to be effective. Is probably going to disappoint those who love Angels Cry and Holy Land. That aura needs to be preserved.

Blistering.com: Naturally, there’s a certain nostalgic aspect toward yourAngel’s Cry through Fireworks lineup. What made that lineup so successful, especially in a time when melodic and/or power metal wasn’t exactly popular?

Bittencourt: I believe that power metal was still being invented and there were much more room for experimenting. For the same reason the audience was more open for the new sounds. That was added to the fact that we were not standard metal musicians. We were familiar to pop, bossa nova, MPB, jazz, classic and ethnic stuff. And we were lucky to be successful building up a style that could be classified as powerful and metal, but it was very unique among other power-metal bands.

Blistering.com: I watched some vintage videos of the band on YouTube recently [watch here] and was blown away by the audience’s response. What do you remember most about those times?

Bittencourt: The same reason that build our success was something that we are always fighting against. Which is the fact that, in the end, people didn’t group us on any particular style. We are too traditional for a prog-metal festival and too experimental for a power metal scene. We were building our own crowd which could be seen as a quality, but in order to build success we would need a more steady production and a more intense and closer relationship with the fans.

Blistering.com: Around that time, you were highly visible on MTV in your home and surrounding countries. Did it feel odd that they were so behind you? At that time, especially in the United States, MTV wanted nothing to do with metal ha-ha.

Bittencourt: MTV Brasil was a brand new channel and we had a good crowd here. So they liked us. As soon as they started to have a more hype approach and looks we became too weird and ugly for the channel. It´s alright…I don´t like to be where I´m not wanted. My mother

said I´m not that ugly, ha-ha

Blistering.com: Your visits to North America have been sparse. Any hopes in rectifying that in the coming years?

Bittencourt: For that we need a plan and some budget to invest. It´s not commercially compensating in short terms. We need to have a better scheduled world tour and invest some of the income there. In long terms could be a nice idea since it is still a great market and a huge country, a very small share

means a lot of people reached. Also, if you are a rock musician it is always nice to have any kind of approval from the country that invented rock music. It´s hard. Like here in Brazil, it will be always hard for a foreigner to cause any impression writing a samba. But it´s not impossible.

Bittencourt: We plan a small promotional tour for Best Reached Horizons. Only me and Kiko [Loureiro, guitars] playing the acoustic, singing some tunes and telling some cool stories about these 21 years. We are preparing a surprise for the 20th anniversary of Angels Cry, our debut album. And of course, the audition for the new singer together with the writing of the new songs.