Ancient VVisdom – Down On the Chain Gang 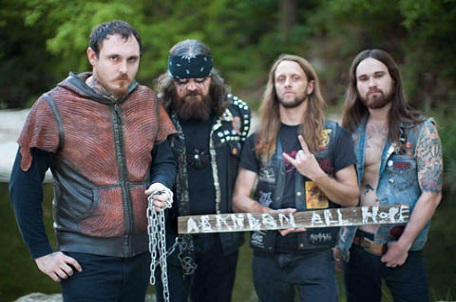 The primordial allure of Ancient VVisdom’s A Godlike Inferno (Prosthetic) is irresistible. Irresistible because of the harmonious vocals of mainman Nathan Opposition, who is thrust up against acoustic guitars, minimal bass lines, and chains, machetes, and bamboo as the percussion. And once savory, instantly-hummable songs like “The Opposition,” “Devil Brain,” “Children of the Wasteland” enter one’s cranium, they’ll be harder to get rid of than a case of the crabs (gross). What could be akin to campfire music is more like a wistful hymn to the horned one, which is exactly the way Opposition and crew like to position themselves.

The Austin, Texas-based quartet came to formation in 2009 after Opposition left Cleveland hardcore legends Integrity, and hooked up with acoustic guitarist Justin Mason, and Opposition’s brother, Michael (electric guitar). The band’s lineup is rounded out by former Iron Age members Alex Hughes (stand-up bass) and Wade Allison, and bamboo percussionist Chase Warlow, this giving Ancient VVisdom one of the more unique formations in modern metal. The absence of real drums works in the band’s favor, creating a trance-like atmosphere that coincides perfectly with songs that are almost too easy to sing along to.

2012 has already been quite the busy year for the band, with an opening slot on Ghost’s North American winter tour and a run of dates in the United Kingdom under the belts. In addition, AVV found time to squeeze in the recording of their forthcoming album, Deathlike, which should be released later in the year. As Opposition would go onto to tell Blistering, there’s plenty more where that came from…

Blistering.com: You did some time in Integrity prior to forming Ancient VVisdom. What were some of the main takeaways from being in that band?

Nathan Opposition: I had a great time, we got to travel the world. I learned a lot by being in the band, just by how it functioned. I learned a lot from (band leader/vocalist) Dwid handled his business. That’s one of the intelligent things about life – you get to go out and experience it. I think that’s what I did with that – I watched how a band like that functioned, which made me say, “You know what, I’d like to do another band again.”

Blistering.com: Austin is such a great place for music, from what I’ve been told. In terms of shaping of the band, did your current surroundings help?

Opposition: I think to a certain degree it can very much change everything you do. It also affected a certain swagger with our songs; given it a more Southern sound. It definitely affected the songs in a certain way, even more now that people are noticing that we have a Southern swagger here and there.

Blistering.com: You recently did some dates in the United Kingdom. How did those turn out?

Opposition: Oh, they were awesome. We did a BBC1 recording session, which was cool. We did four songs, one was a brand new track, then we did a show that night at the Brixton (Academy), which was a headlining show. All of our buddies showed up, got hammered drunk, singing along and shit. It was like a big party [laughs]. That was the great, and all of the other shows were really cool as well. It was cool because they were just our shows and people were showing up to see Ancient VVisdom, so yeah, we love London. We have tons of love there, which is awesome.

Blistering.com: I talked to some people who caught you on the Ghost tour this past winter and they had a similar strong reaction to your live show. In terms of laying the groundwork in North America, how big of a tour was that for you?

Opposition: You never know what would happen with that tour. We got some really cool tour offers, but we did this one, and it was really great for the band. The timing was right from that perspective. We’re going to keep touring in our region, which should be bad-ass. We like playing and touring with bands we have no business sharing a stage with. It’s funny. We’re going to keep busy with that. Did I even answer your question?

Blistering.com: I would say so, if we were talking about the Ghost tour. Some people we talk to give one-line answers and expect us to figure it out from there.

Blistering.com: Since you’re a part of the metal scene, people have a pre-disposed idea as to how bands should sound and present themselves. Obviously, your live presentation is a little different than most, so can you describe the various reactions you’ve received?

Opposition: We get a lot of people that enjoy and appreciate the rawness of the acoustic guitar or for the lack of a better term, the “organic” nature of our sound. It’s not like it’s an organic market or farm, though [laughs]. People slap it on music now and call it “organic.” There’s a lot more organic things than us, but I’m not worried about it. People like a lot of the added bonuses with the machetes and things like that. We’re going to do a lot more of that – we just recorded a new record and we’re going to put a lot of new progressive sounds on there. It’s a cool thing, but we don’t want to change what we have. Depending on how much you drink that night, it gets closer and closer to you [laughs]. People really enjoy that, I think. Like, when I hit someone’s iPhone out of their hands with a chain.

Blistering.com: Then they’re mad because how dare you interrupt them using their phone while they’re at your show.

Opposition: People watch the show through their phones.

Blistering.com: Oh yeah, I see people spending more time on their phones than watching the show.

Opposition: It’s pretty crazy how big people’s cell phones mean to them. It’s a much more personal experience without it than we’re your drifting off in phone-land. I didn’t have a cell phone until about two weeks ago. I had all of these gigs coming up, so I figured I’d get one.

Blistering.com: As for the new album, one of the best parts of it is the tonality of your vocals that lend to these great melodic sections, like on “The Opposition.” What does it usually take to bring out this side in you?

Opposition: It starts with one thought, actually. It’s really natural for me, I just come up with one line and build from it. I can put a huge melody to it and it starts from there. I think for songwriting, you have to let the song write itself for you to a certain degree. If you try to control it, you have to let it go. That’s one of the things we do – when we record, we try out different sounds and just let it happen.

Blistering.com: If you listen really closely to the album, there’s such a natural feel to it, like you’re actually there in the room.

Opposition: The way we recorded it was weird. We recorded with in an analog way, but with digital equipment. I’m thinking we’re going to do an analog recording for the next one we do. We put drums last, just to mess as much as we can with the drum sound. There was some bamboo lying around the studio and some stuff in the parking lot, so we got that primal thing going on [laughs].

Blistering.com: So are you always pumping out material?

Opposition: Well, I’ve had a lot of songs written that I’ve had to backtrack through my mind to get [laughs]. I got a title, then lyrics…it’s all in my head. I don’t write too much down, but in the studio, I have to figure out what I need to say. I like to write all the time, I just keep playing and it’s often when I’m inspired. If I’m walking down the road, I’ll let my mind come up with something, or I’ll see something that inspires me. You can’t write something without being inspired. You can’t force your will upon that.

Blistering.com: It sounds like at this point, you can go in any direction you want. That must be a nice option to have.

Opposition: Everything is open to our interpretation; whatever we want to do. Whatever is around us, we run with it. We see where can take it.

Blistering.com: To some degree, you fall in with the current wave of occult rock bands like Ghost and The Devil’s Blood. Are you comfortable with this?

Opposition: Yeah, those are great bands. I like the content, it seems be recurring in this style. It went away a couple of years ago, but there’s always been occult bands like Christian Death, Bauhaus, so for me, there’s some good bands that are underground, whether they’re industrial or just occult-oriented. Seeing it take flight is pretty cool. I think the fact they preach being an individual no matter what you do is cool. The trend is always for people to be a follower, but I’d rather not follow anyone. It’s just the way people give to labels to everything, but I enjoy those bands. I think there’s a lot of good music being discovered because of that, and content-wise. It sure beats music that has no substance.