Anathema – They (Will Always) Evolve 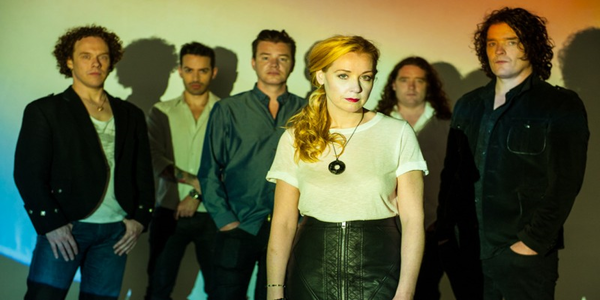 Clearly up for some chit-chat, Anathema guitarist Danny Cavanagh starts the interview you’re about to read by asking where this scribe currently resides. When the answer is “Pittsburgh,” Cavanagh proceeds to detail an eight-week stint he had in the Steel City during the ’90s recording an album with Trouble singer Eric Wagner under the Lid banner. Said Lid album (Under the Mushroom) never made any traction, with Cavanagh going as far to admit that “there are only a few good songs on it anyway.” Taken as a whole, the man’s candid nature is refreshing. At several points during our interview, Cavanagh asked what I thought, or how I felt about something, a rare happening in the one-sided world of interviews.

Cavanagh’s reason for phoning up DR is Anathema’s new The Optimist album. As perhaps their finest work since 2003’s A Natural Disaster, The Optimist finds the Liverpool-based sextet at their brightest and dare we say, heaviest, in a long time. Buoyed by a live production job, the tunes here simply jump out of the speakers, most notably the crashing “Endless Ways,” the simply awe-inspiring “Springfield” and album highlight, “Ghosts.” It’s an album that comfortably resides in the band’s expansive discography (lest anyone forget their brilliant early metal forays) while continuing Anathema’s never-ending pursuit of evolution.

With that in mind, here’s Mr. Cavanagh, waxing on many things, the first of which was Anathema’s 2001 gem A Fine Day to Exit…

Dead Rhetoric: Since The Optimist ties into A Fine Day to Exit which came out in 2001, how do you feel that album has held up over time?

Cavanagh: Great, especially after we made a remastered version of it. The running order was changed. Do you know about it?

Dead Rhetoric: No. Was it released over here?

Cavanagh: I’m not sure, but it was released by Music for Nations last year. I think it was called Fine Days: 1999 – 2003. We remastered it. I was listening to it quite a lot then, obviously for the purpose of remastering and also just to hear it and it’s much, much better.

Dead Rhetoric: That album has some of your better songwriting moments like “Barriers,” “Inside Looking Outside” and “Temporary Peace.”

Cavanagh: We’re going to play that [“Temporary Peace”] on the next tour. It’s been quite a long time since we’ve played it, but we’re playing it because it relates to the album we’ve released now.

Dead Rhetoric: With A Fine Day to Exit, did you see that album as your last chance of making it commercially?

Cavanagh: Back then, I did. That was a dream of mine, then. It isn’t anymore. The fact is that we’re far bigger now than we were then. It’s strange. I don’t hold that illusion anymore. I wish it was the case because it would be great to not worry about money and we could travel in comfort. Touring is such hard work just because of the way we travel, but I’m quite satisfied with what we got going.

Dead Rhetoric: You’ve had a career like no other, but your core fanbase has stuck with you and you’ve continued to add fans.

Dead Rhetoric: With The Optimist, this is the first time you’ve done a concept album. Was it hard to stay within the boundaries of that?

Cavanagh: No, it was easy. I don’t know why. It seemed to come easy. I mean, to be honest, it’s a very loose story and half of the story is untold. People could make it up themselves. We never said who the person was, number one. We never said how it finishes; you have to decide that for yourself. We don’t say where he’s going or what he’s doing, but he can’t let go. We all feel like we have to let people make up their own minds.

Cavanagh: I think it started with the image of the album cover and the song “The Optimist.” We thought, what if there was a story? We jumped at the chance to do a story. We thought, what if there was a story, what would it be? Taking the theme of escape as the beginning point. You see the character driving…he starts and he’s in the car. Is he in America? On A Fine Day to Exit, he’s in a car, but where is he driving? If he’s driving in a car, maybe he’s driving up the coast. We leave it up to people to determine where he goes.

Cavanagh: Yeah. The song “The Optimist,” the whole end section, the last two minutes, I don’t think it would have been happening if we didn’t play it on tour. We were playing the song every night and the response from the audience was mental. I thought “Whoa. I think it’s the best song.” Everybody is going crazy for “Springfield,” but then I started to think “The Optimist” was too short. I thought there was something wrong with it, so we played it another night and there was something different. We added something to it…the final part of the song.

Dead Rhetoric: In my notes, I wrote the words “bright” and “positive.” Would you say they’re appropriate?

Cavanagh: It goes to show everyone hears different things. Some people think it’s dark. It’s interesting. “Springfield” is one of the darkest songs on the album. “San Francisco” is bright, I would say. With “Springfield,” it’s one riff. We piled about five or six counter-melodies going on. One guitar is one melody, the keyboard is another, there’s a second keyboard melody and you have at least four different melodies in the guitar. They’re all orchestrated, but it’s still one riff. There’s a lot of layers.

Dead Rhetoric: You did the “Resonance” shows a few years ago with Darren (White, original vocalist) and Duncan (Patterson, original bassist/co-songwriter). What did you learn about the shows?

Cavanagh: That Duncan is funnier now than he was back in the day. [Laughs] He’s so funny; he was absolutely cracking me up. And, that we play better now than we did. We sound better now than we did. We are, obviously, more enhanced at our craft. Some things never change; some of the internal dynamics are more or less the same, just 20 years later. Some of us have grown up a little bit more than others. I particularly enjoyed Duncan’s contributions to it. He’s such a clever guy. He’s so kind…how can I put it? He’s very observant about what the people around him are thinking. It was easy to be around him. I remember him like that. He made me laugh so much.

Dead Rhetoric: He was also your songwriting partner for all of those years.

Cavanagh: We weren’t really partners. He used to write his songs individually and I’d write mine. The one album we did do together was The Silent Enigma [1995], which was improvised in the studio. That album is an improvisation.

Dead Rhetoric: And that’s when Vincent (Cavanagh) stepped in as singer. Were you stressed out?

Cavanagh: It wasn’t our idea to go into the studio with nothing written. We just had a load of riffs and basic arrangements. That wasn’t really our idea. Darren booked it. We did Pentecost III like that and Darren made the mistake thinking that Pentecost III is any good, which it isn’t. The vocals are shit. The vocal arrangements for the first album [1993’s Serenades] are good because he had time to get them right. On Pentecost III, he just was making stuff up. The chances of it working were pretty slim. He thought that EP was good so we can do it. He booked the studio. We went in and improvised the music. He was there and listening to the music and writing words down. When it came time to record them, it sounded like Pentecost III, which is fine for that, if you want to be that band. We could have stayed like that. We could have been a big band. We could have stayed like that and been a good, big metal band.

Cavanagh: Well, Vinny’s a proper singer. Darren is a vocalist. Then you got Lee Douglas, who is even better. She is the best, actually.

Dead Rhetoric: What are your expectations for your American tour later this year?

Cavanagh: To be honest, I don’t know. I know it’s going to be more comfortable than the previous one. We are traveling by bus this time so it won’t be in a van. It will be easier in that respect. Hopefully, it will go well. The last time we had another quite well-known band playing with us. I don’t know what to expect this time, but if it’s anything like New York in 2013, I’d be delighted.