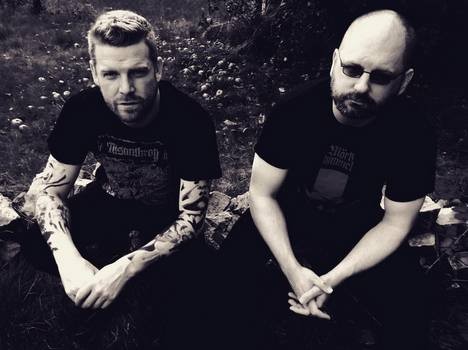 Restraint isn’t really a word that one tends to associate with a band like Anaal Nathrakh. The band’s feral energy and chaotic yet majestic sound have propelled them along the way for many of years, ultimately landing them with Metal Blade for 2014’s Desideratum. Last year, the band was finally able to do a proper North American tour, and now we are creeping ever-closer to the unveiling of the next opus, The Whole of the Law.

Continuing their conquest of abrasion with subtle melodic nods, The Whole of the Law completes the challenging job of one-upping the band’s discography, providing frenetic chaos with soaring/crazed clean vocals in a way that only Anaal Nathrakh can provide. Vocalist V.I.T.R.I.O.L. (Dave Hunt) spoke to us about some of the ins-and-outs of the new album (of which AN always provide intrigue), their “Powerslave” cover, and their instinctive writing style.

Dead Rhetoric: There always seems to be a story behind your album titles – what spawned The Whole of the Law?

Dave Hunt: The demo that we never recorded – like way back when we were doing demos. We were planning on recording another demo but we got a record deal so it never happened. We had decided to call it We Will Fucking Kill You, which is possibly a little too blunt and slightly adolescent, but that’s we thought. Then we thought maybe we’d call this album that, to bring back the title. But it didn’t feel quite right – it seemed a little childish as a statement to see on an album in Walmart or wherever. And also that it might be a little misinterpreted maybe. But nonetheless, the idea is still there and its one of the songs on the album.

The thought there was the idea that behind a lot of conflict that you see in the world, whether its countries fighting wars or gang members shooting at each other – there seems to be a motivation to not just win, not just to stop your opponent attacking you, but totally destroying them. And I’m not saying that’s right, I’m not recommending that or anything – it just seems to be there. So I thought about that, and it struck me that it is true at the top of the world, so to speak. That kind of motivation seems to lie behind things like the principle of mutually assured destruction, with nuclear weapons and the way that wars are fought. I just thought, that I’m not saying it’s literally true, but there is a perspective that it seems to be the principle that rules the world. Therefore, it’s the whole of the law.

Laws, as we or you might encounter them, are ultimately grounded in that kind of thinking. The state can tell you what to do because the state is strong. The state is strong because it can defend itself against other states and so on and so forth. It goes right from the top to the bottom of society. The title seems to capture about something that was not necessarily obvious about the world, and that’s what I try to like to do in titles.

Dead Rhetoric: In terms of the tracks themselves, just with previous history. Are there some that have kind of a cool narrative to them –I know you sometimes pull things from literature. Anything on the new album where you do anything like that?

Hunt: There’s all sorts of ideas going on. Actually, on this one, I can particularly think of one that’s from literature. It’s a lot of observation and translating things into metaphors. Dealing with real topics and the real world, and making creative use of them. The song “We Will Fucking Kill You” is kind of what I was just talking about. “…So We Can Die Happy” is probably one of the most upsetting things I’ve ever seen on TV. It was a news report from Syria. There was this kid, about 10 years old, and where he was living had been under siege, so they had very little food or water. They had been told that they might be hit by chemical weapons, and his response to the journalist was to say, “If they are going to use chemical weapons, that’s fine…but can they make them smell of bread, so we can die happy?” That ruined my day. It was horrific to witness.

But I think there’s something valid to drawing attention to those things through music or art – it’s not an endorsement, it’s just discussing…saying “look at this, this stuff’s happening.” I’m trying to think of other stuff – because there’s loads of other things on the album [laughs]. But I think that will probably do you though won’t it? Once you’ve heard that story, it kind of renders most other things pointless.

Dead Rhetoric: Does it become more challenging to continue to up the ante, so to speak, with successive releases?

Hunt: No, no it doesn’t. Because we really don’t pay much attention to anything outside of ourselves, in terms of what we want an album to do. If it’s satisfying to us and we think it’s good, then we trust that people will feel the same way. I think that if you are chasing expectations – if you are trying to live up to something or you are trying to do what you think people will like – you are not doing something genuine. You aren’t doing something real. That’s usually a recipe for disaster I think. You have to do what’s right for you, first and foremost. So we just don’t think about expectations.

As far as surpassing things from the past – if it happens, which I hope it does – it’s just a natural byproduct of just pushing yourself. We tend to do pretty much everything very intuitively. We don’t calculate what to do – we get a feeling and we go with it. It’s a natural thing – we evolve, we will progress, we will get better at things, we’ll have new ideas and so on. We don’t worry about competing with our former selves. Hopefully, we are in a better position today than we were yesterday, and it will continue in that direction.

Dead Rhetoric: “Extravaganza!” has some particularly crazy vocals on the clean side of things, even for you. Did you enjoy the focus on more falsetto-type vocals?

Hunt: Absolutely. It was something a bit different. For as long as we have known each other, we [Mick Kenney] have both been big King Diamond fans. Obviously our music doesn’t particularly sound like his for the most part. Even that song might have some King Diamond type singing on it, but you wouldn’t think of it as a King Diamond song. But we’ve always appreciated his work. He’s a legend as far as we are concerned. The atmosphere of the music, before it had any singing on it, had a spooky sort of vibe to it, rather than being outright scary or massively aggressive. The predominant feeling I got from those middle parts with that type of singing on it was a sort of spooky vibe, and it just seemed to fit. That’s how we decide what vocal style goes on what piece of music. It’s what seems to fit. I think that will make it intuitive for the listener as well. Some surprises maybe, but they should feel like the right thing at the time, even if you weren’t expecting it. So we just went with that feeling and ran with it. I’m quite proud actually. It’s probably my favorite song on the album. It’s a bit different but it’s cool…I like it.

Dead Rhetoric: Definitely. Just like you said, it fits that spooky vibe. You guys can go with the full-on aggressive vibe, but it fit well I thought.

Hunt: Yeah, it’s a little different but at the same time, at least I hope, I think it feels congruent with the rest of the album. It’s not something totally different to everything else. It’s just a new side to things. A little extra facet.

Dead Rhetoric: Much of the band’s recording/writing is based more on instinct than extensive planning, as you said – does this allow the music to come across as more genuine to the listener?

Hunt: I think so, yeah. I would hope so. Certainly more spontaneous. You say the recording/writing process – there isn’t really a writing process. I know that lots of bands will jam songs together or one guy will sit down and meticulously put together songs or whatever. We do everything in an instinctive way, and I think that lends itself into music feeling right. Being able to channel a feeling more than a particular musical idea. That’s, to me, what music is about. It’s feelings, it’s an atmosphere. I think overthinking things can only detract from that. It’s better if you go with the instinct, for me. That leads to the best music, of this kind. I appreciate that you can’t write a piano concerto that way [laughs]. But for this type of stuff – it’s gut-driven, Dionysian kind of stuff. That’s the best way to achieve that effect…to write music in that way.