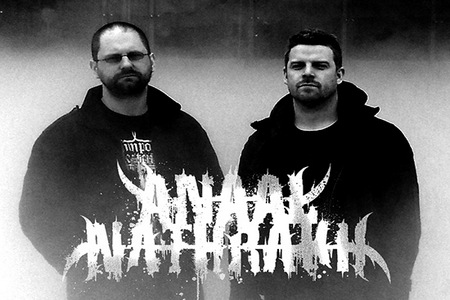 Dead Rhetoric: Completely jumping a bit, I remember when you announced that you were signing to Metal Blade there was actually significant grumbling on your Facebook page. Were you surprised that people thought you were going to change because of the label you went to?

Hunt: Yeah, very much so. It wouldn’t occur to us that it would happen. The plain fact in this case is that we pretty much finished the album before we signed the contract. It would have been absolutely impossible for [a change] to happen. If we had signed with any label, if they tried to tell us what to play it would be a very short conversation. That’s just not what we do. It also represents a bit of, not necessarily confusion, but a bit of a lack of understanding on people’s behalf. Which is understandable, I’m not trying to say that people are stupid or anything. It might be easy to think that record companies do manipulate people and try to make them commercially viable and that probably does happen with certain labels in the pop music industry which are manufactured by executives.

But at this end of the industry in general, I really don’t think that happens. I don’t think Metal Blade would want to do that, I don’t think they are that kind of label; if we thought they were, we wouldn’t be working with them in the first place. It’s not what we do. We are going to do the album we are going to do. But yeah, it did come as a surprise that people would think that, but it might be understandable if you take into account that people have misapprehensions about the way things work. But there was never a chance of that being the case with us.

Dead Rhetoric: There’s always an intellectual aspect to the lyrics and titles involved with an Anaal Nathrakh. We already talked about the title track, but what are some of the references you could expect to find on Desideratum?

Hunt: There’s a whole heap of stuff going on. Let me think of just a handful. There’s a couple of illusions to stuff by Bertrand Russell, who was a philosopher in the early 20th century in the UK, who wrote a piece called “The Free Man’s Worship.” The later parts of it are sort of hopeful and I don’t quite like that part, but the earlier parts of it are about confronting the fact that the universe doesn’t care about you. As a species we need to get over ourselves and stop thinking everything is about us, because it isn’t. There is no meaning to things; there is no structure, there is no plan. That can be a distressing thing to get your head around, but I think that Bertrand Russell put it very well in that piece so there’s some influence from that.

There’s a little bit of a guy called Thomas Pogge, a German who is concerned with global poverty and the way that the massive, grinding, horrific poverty leads to lots and lots of death. The way that’s built into society, the way that global economics works; it’s not some unfortunate thing that happens for mysterious reasons, it’s quite consciously part of the process that governments all around the world are engaged in. That’s kind of a distressing thing to start to understand. I’m not convinced that he’s right but it certainly seems plausible. That’s some pretty nasty stuff. There’s all sorts of bits and pieces to be honest. Inspirations for Anaal Nathrakh stuff just comes from everywhere. It could be from walking down the street, watching TV, reading a book, or seeing a painting. In general, it’s commenting or reacting to the human condition in general and the way societies work and that can come at you in a million different ways.

Dead Rhetoric: I read in an interview that you had done that you get “visual images” in your head, not like visions or hallucinations, but just a visual image. Does that happen spontaneously?

Hunt: Yes, usually. I suppose a psychologist could probably help to describe the way it comes about but it seems to be that things just pop into my head. There’s actually a song that we did on the last album, called “Of Fire and Fucking Pigs” and that was something that just came into my head. A complete picture or film you might say. It’s a bit difficult to describe. I was in my mate’s car and we were driving down the street and all of a sudden the buildings looked ruined and it was dark with fires all around with people cavorting with pigs and screaming all around and then it just passed. Then we went to the pub [laughs]. It’s not some big wizard-y kind of thing and I get it quite a lot but yeah, it’s kind of odd to try to explain it really.

Dead Rhetoric: You had a short-run blog on Terrorizer a few years ago. Would you ever consider doing something like that again?

Hunt: Yeah, I’d consider it. It’s a matter of why anyone would want to bother reading it [laughs]. I’d like to think at least that I can write well enough that if I have something interesting to say, I can put in into an interesting way. I’ve got too much stuff that I need to focus on though at the moment. Maybe ii I had more free time I’d do it again. It’s not an unpleasant thing to do. I do have a bit of a problem saying, “this is my opinion, and you should listen to it.” It seems like a weird act of vanity to me, so I don’t feel driven to do it, but maybe someday.

Dead Rhetoric: You will be doing the Maryland Deathfest next year. Are you going to be getting any other dates added around that time, or will it be a one-off thing?

Hunt: We aren’t sure yet, it would certainly be cool if we could do that. We have been speaking to a booking agent over there [in the US} so fingers crossed. At the moment, it’s just the one-off but if we can build from there then we will.