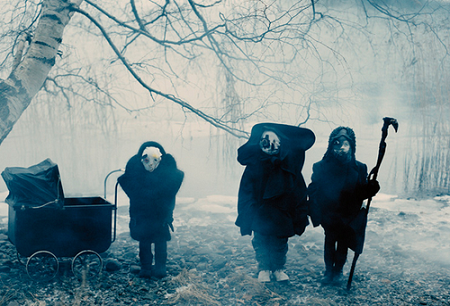 The internet age has taken the mystique out of bands. It’s not that difficult to figure out what INSERT YOUR BAND HERE is up to by checking out their Facebook profile or Twitter feed. Most of it is rather useless drivel, sandwiched between quasi-pertinent updates on shows and/or album work. Gone is new album anticipation, while the notion of “too much information” serves to flood the senses. It’s really no different than the poor souls who feel the need to update their respective social media profiles with their every waking move. It’s overkill. Netherlands’ An Autumn for Crippled Children, obviously, feels different.

“I think being visible [on social media] would gain us even more exposure I think,” begins vocalist/guitarist MXM. “We made this decision when we formed the band to concentrate on nothing but the music. We are not displeased with what that brought us so far. I have very little interest in social media and so does the rest of the band.”

(Note: The band has a Facebook page, but hasn’t made an update since they started their page in 2010.)

Their disinterest makes sense. AAFCC plays a raw, but immense, seismic, melodic, depressing, soothing, and multi-faceted brand of black metal. It’s like as if Alcest played music as if they got out of bed on the wrong side, early Katatonia just without the forceful vocals, and possibly Burzum without the stupid ideology. To that end, the band has enjoyed four albums in four years run, including this year’s fantastic Try Not to Destroy Everything You Love.

“We have our own recording ‘studio’ which is permanently set up,” adds MXM when asked about the band’s torrid output. “We have some gear, it’s not a proper studio, so we can record whenever we want and work on things as long as we want. I think a year between albums is pretty normal.”

Pondering how the band would sound with a clean and proper production job proves to be difficult, especially for MXM. “No, it would not work. We love old analogue productions. We just can’t afford it. We just make the best of equipment we have. We have no ‘set’ sound we try to capture. We just do what we think is the right thing for AAFCC.”

According to MXM, Try Not To Destroy Everything You Love is about “Heartbreak, personal growth and hope,” themes that have come to define the band’s previous output, including 2011’s Everything and last year’s Only the Ocean Knows. And contrary to appearances, the band took the “less is more” approach to the new album, even if some of these songs are overflowing with can’t-miss ideas (see: “Avoiding Winter,” “Never Complete”).

“We just started writing songs, brainstorming subjects, rehearsing and see what comes out,” he admits. “I think we really cut out all excess things. These songs are very to the point.”

DR could probably devote an entirely new feature regarding the strength of the band’s back catalog. Each of the band’s four albums are utterly recommended, with highlights all over the place, including the dire “Forever Never Fails” and “Formlessness” from Everything; the brilliant, ethereal movements of “Past Tense,” “Yes I Know…Love and Death…Always,” and “The First Snow This Year” from Only Ocean the Knows. Therefore, it was only fair we asked AAFFC’s main composer what his preferred songs were.

“From Everything I personally like: ‘Nothing/Everything.’ I like the continuous building of tension and the second melody (0:50). From Only the Ocean Knows, my favorite is the title track. I think it’s such a simple song but works so good. The simple piano part at the end is the highlight for me. ‘Hearts of Light’ is also a favorite. You can never really choose between ‘children’ can you?”

For a band so purposely limited in the press and live show department (AAFCC does not perform live), a memorable quote from Frank Zappa seemed right when approaching the band for an interview: “Writing about music is like dancing about architecture.” It’s something any worthy journalist can identify with; same for those who devote their creativity to music. Alas, for AAFCC, it really is only about the music. Not social media, or “likes,” or tweets, or any of that rigmarole.

“We do it for promotion, fans and maybe the label,” finishes MXM. “Fans and label deserve some kind of info/exposure, otherwise we would be arrogant assholes. Both fans and labels invest time and money in you. You got to give something back. But doing the interviews is not what we really like. It’s a necessary evil. I agree with Zappa: A little info etc., but the music is the most important thing for us.”