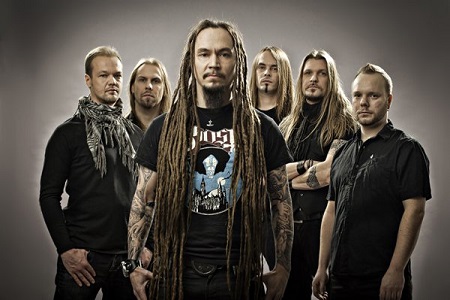 The 2005 acquisition of singer Tomi Joutsen effectively saved Amorphis. Let’s not make any bones about it. The band was all but a non-entity after 2004’s disastrous Far From the Sun, with waning interest on both sides of the pond, along with a soon-to-be-departing singer (Pasi Koskinen) and no label backing on North American shores to boot. So to undermine the brilliant nature of 2006’s “comeback” Eclipse would be doing both Joutsen and Amorphis a great injustice. It was one of the decade’s most enjoyable albums, and righted the Amorphis ship. The dreadlocked vocalist should be given a medal for rescuing Finnish metal’s most precious national treasure.

The Beginning of Times is the newest output from Amorphis; their 10th overall, and fourth with Joutsen, respectively. Based around the story of Väinämöinen (the central character in Finnish folklore), the album sees Amorphis do what they do best: Kick out prog-inspired numbers, laced with gentle melodies and Joutsen’s soothing one minute/roaring the next vocals. Tracks like “Mermaid,” “My Enemy” and album standout “Song of the Sage” are among the best cuts the band has popped out since Joutsen joined the fold. There’s just no stopping Amorphis now, and thank goodness for that.

Being that Amorphis is operating at such a brisk pace, Blistering figured it would snag one of its founding members, rhythm guitarist Tomi Koivusaari for a round of questions. As the man who was the first Amorphis singer (his grunts on “The Castaway” remain some of the most fierce in Finnish metal history), Koivusaari has the right perspective on Tomi Joutsen, among other worthy topics such as the new album, the enduring legacy of 1996’s Elegy and much more…

Blistering.com: You’ve hit quite the groove with Tomi fronting the band. How easy and smooth have the last five years been since he joined?

Tomi Koivusaari: Very easy and smooth, all having same motivation and professional touch to do what we do. Before it felt like we had to force someone to rehearse, etc. It has [been] very satisfying years to Amorphis, and fun as well. Tomi brought so much new energy and good spirit to the band when he joined. Also our live playing got 100 times better than ever before.

Blistering.com: Do you ever think about what the band would have done had you not have been able to find him?

Koivusaari: Hard to imagine, as we trusted all the time that there will be right guy for us somewhere. If not, we’d probably done [an] instrumental album or something. [We] never had thoughts that we should quit or anything. But hard to say what position we would be now without Tomi, cannot deny that he started kinda a new era for Amorphis.

Blistering.com: Your lineup has been stabilized during this span as well, which must help when writing, recording, and touring. Can you remember the band ever functioning at such a high-level?

Koivusaari: No, when our first successful album Tales from the Thousand Lakes came out, we were very unprepared to work professionally when it came for touring and stuff. We were also very young [at] that time. So now we have learned from our mistakes, and now when we have kinda new “up-going” period, we can really appreciate that and can work professionally. This is a full-time job for all of us, and we are taking this serious and want to offer our best when it comes [to] live shows and albums. Also, it took like 15 years to learn not to trust wrong people and so on, now everything is under our control.

Blistering.com: As for the Beginning of Times, what drew you to the story of Väinämöinen?

Koivusaari: Three previous albums have told one character’s story of Kalevala, Finnish mythology. Väinämöinen is biggest character of that, we were little bit afraid to go that subject before this. It’s hard to go further with same subject after this so this might be a good way to end that concept and think [of] something new.

Blistering.com: In the past, you’ve based your concepts on broad Finnish concepts, so was it difficult to focus the story on one person like Väinämöinen?

Koivusaari: Pekka Kainulainen wrote [the] lyrics this time as well, so we were more concentrating on music, and what inspirations that subject offered us musically. So to be honest, I personally read the lyrics about same time Tomi was recording them. In that way not too difficult – none of us are not that great [of] lyricists, so we want to concentrate on making music, and we want lyrics which fit our music perfectly, and are in same world and dimension. That’s actually what matters. We don’t want to rape music with semi-lyrics done by ourselves, so to say.

Blistering.com: At this point, any songs in particular sticking out for you? I’ll point to “Song of the Sage” and “My Enemy” as being my favorites.

Koivusaari: It’s still very difficult to say, as I’m still too close to it, and cannot listen to it as [an] outsider. When we’ll start to play them live it will be clearer what will be my personal favorites. Right now, I’m satisfied with [the] wholeness of album, ’cause that was what we wanted to do, not particular songs.

Blistering.com: In fact, “My Enemy” is one of the most “death metal-sounding” songs you’ve done in recent memory. Did it take you down a trip on memory lane?

Koivusaari: We released this Magic and Mayhem album, and had small tour with every former member of Amorphis included just before we started recordings for The Beginning of Times album, I think that was also affecting how heavy some songs turned. It wasn’t purpose, more like that we can do it this way as well.

Blistering.com: It’s been 15 years since Elegy. Is that hard for you to think about?

Koivusaari: It’s just so strange how fast time flies, even how cliché that is. Lot of things has happened though, and that album still sounds kinda fresh to me. Never thought we would still exist after 15 years from that. I’m glad we are still around.

Blistering.com: Many will point to Tales as being your definitive work, butElegy (in my opinion) is the stronger album. What’s your take on it?

Koivusaari: Tales was maybe very first important album for us, cannot deny that. Personally I like Elegy better, as we went more to our “own” direction with that album. Also I like [the] production much better, actually it is very nice and timeless sounding record still! But people have their own favorites [as to] what has been important to them in certain phases of life, and that’s how it should be.

Blistering.com: The guitar interplay between you and Esa [Holopainen, lead guitars] is so seamless. Describe the working relationship between you two.

Koivusaari: Nowadays we know exactly what other is going to play to some song, so we don’t actually even talk about it. It’s just very obvious, and I know what kind of parts I can go more spacey and parts when I need to keep heaviness and other way. When you play 20 years together, it comes very easy to read other’s mind.

Blistering.com: Now that you don’t have to do any growls, has your job onstage become much easier?

Koivusaari: I don’t know if it became easier, but I like it more when I just have to concentrate [on] playing guitar. In other hand it was easier when I was growling, as there wasn’t too much options than stay near microphone and mosh. I didn’t like to be a “frontman” to be honest; I’m more satisfied to be little behind.

Blistering.com: You’re one of the longest-running bands in the Finnish metal scene. Do you feel any type of responsibility in terms of keeping the quality of metal high?

Koivusaari: If we someday are making album just to get to tour, it’s time to quit. We are still trying to do our best album, and we are very ambitious when it comes to making music. Not that much feeling responsibility, but we don’t want to ruin what we have reached. Quality comes maybe because we just love to make music so much, all levels in that.

Koivusaari: We will be very busy, which is great. First, we go to Japan and Taiwan for tour with our friends Children of Bodom, then continuing summer festivals all over Europe. On fall we will do four weeks in Europe, two weeks in South-America, 17 gigs in Finland, some Russian shows, then again four weeks in Europe, supporting Nightwish in California, playing in 70,000 Tons of Metal cruise… and more to come, hopefully hit the states with a tour as well at some point!