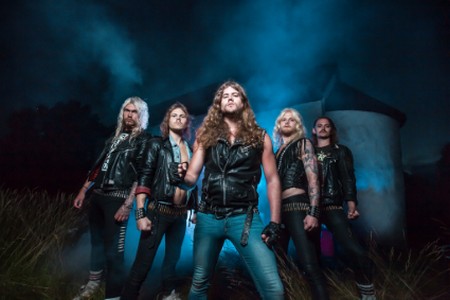 Old school is the new school for a lot of twenty-something musicians who raid their parents or elder siblings record collections to become charter members of the heavy metal community. We all have to start somewhere – and many use gateway bands from Black Sabbath to Judas Priest, Accept to Iron Maiden and so on to get their first taste of axe mania, double bass heroics, and screams to the stratosphere. Representing another of the ‘new wave’ of traditional heavy metal acts, Sweden’s Ambush align themselves with the days of analog recordings, catchy hooks, and living after midnight – as their two albums Firestorm and their latest Desecrator clearly show.

Add in their love of beer and an energetic stage presence where the quintet will often mirror a lot of the tandem movements that put their forefathers near and dear to my heart and you have the makings of a solid fanbase that should be willing to grow as the band keep getting better at their craft. Feeling the need to let vocalist Oskar Jacobsson give his thoughts about his 1990’s upbringing into the genre, he also discusses a love of natural recordings, the importance of great cover art, and an appreciation for 70’s Finnish prog act Pekka Pohjola in this recent Saturday morning Skype chat.

Dead Rhetoric: Being a child of the 1990’s, how did you generate a passion for the more traditional and power sides of heavy metal? Can you think back to your favorite albums and bands during those formative years?

Oskar Jacobsson: Yeah, I’ve always been interested in hard rock and heavy metal. You get to listen to a lot of bands when you are young- Kiss was my first hard rock band. I grew up with them, the first song I heard from them was “God of Thunder”. That’s where it all started for me. The Alive album was very important for me. I listened to Doctor Bombay, it’s not heavy metal but more synth pop. I loved Deep Purple and that stuff, so it was a mix of everything.

Dead Rhetoric: Were there other bands that you sang in prior to starting Ambush in 2013? And did you have any particular vocal/choral training or did you just develop your technique through practice, trial and error?

Jacobsson: No I’ve never had any vocal training. I tried to not depend on anyone else to know my voice. I studied a lot of singers of course, I’m interested in how the best singers in the world can actually take on those high notes. I tried to get an understanding of how a heavy metal singer can sing with power, reaching the high pitch. So I listened to Bruce Dickinson, Rob Halford, and Michael Kiske of course. I tried to grab some stuff that they are good at, so no vocal training. You can sing without vocal training if you are dedicated in what you are doing all the time, and not hurting your voice in any way. To know your instrument.

I played in one band with my younger brother before Ambush. It was not that serious, we were like melodic hard rock. Ambush is the first band that I really focused on 100%.

Dead Rhetoric: Tell us about the formation of Ambush – did you know straight from the start what you wanted to accomplish as far as music, imagery, and the types of lyrical topics you wanted to cover?

Jacobsson: We are best friends for a long time, we drank beer and listened to heavy metal for a long time. We are all musicians so it came naturally to us to jam out in Olof’s apartment. So one dark night we decided to start a band, to play the music that we really like – the traditional, old school heavy metal. It was basically everybody in the band loved this music, we shared the same interests in music so it came together very naturally.

Dead Rhetoric: In the summer of 2013 you released a 4 song self-titled cassette. How do you feel the recording sessions went, and are you satisfied with that debut effort? Is this the product that helped you gain interest from High Roller Records?

Jacobsson: We actually recorded this demo tape half a year before it was released. The recording sessions were a blend between drinking and experimenting in the studio. We have a good friend who has a studio in the middle of the woods, with a lot of analog stuff. We jammed out the songs that we had, it came out really good and we are satisfied with the way it turned out. It had some rough mess to the mix which we liked. I think a demo should be rough, not overproduced.

Dead Rhetoric: Firestorm as a debut album packed quite a potent punch, straddling the lines of US and European metal influences from the 1980’s. What highlights do you have surrounding the record? Are you conscious of keeping the performances and production values as natural as possible in an age when computers and digital technology can often squash the human aspect?

Jacobsson: As far as Firestorm goes, we recorded it in an analog way. We wanted to keep it in a natural way and not implementing too many digital aspects. We didn’t do many effects. We want to keep it that way, we want it to sound good and fresh but traditional and retro. That’s an important thing for us. I’ve always liked this album, I’m very satisfied with the product. But I think the new album has more warmth in the mix and punch.

Dead Rhetoric: Desecrator is the follow up full-length – how did you avoid the ‘sophomore’ slump that can affect many young bands, especially due to the fact that the new album comes out within a year of the debut? Did you try anything different behind the scenes or in terms of songwriting this time?

Jacobsson: Yes. We were trying to take this album a step forward, lyric-wise. We were more structured, but at the same time it was stressful writing this album because we knew that we wanted to release an album that’s better than the first one. Otherwise we would be heading backwards so we spent a lot of time trying to grasp some new ideas and influences. The riffs on this album are more thought through, and the lyrical content is much more compact.

Dead Rhetoric: Describe Ambush when it comes to live performances – are there specific things you like to get across, and what have some of your favorite show/festival appearances been so far?

Jacobsson: We really like playing in Germany. Germany is a big heavy metal capitol in Europe, the Hell Over Hannover festival was great there in Hamburg, and we played a festival in Madrid, Spain that was great. Muskelrock festival in Sweden was a big experience for us.

Dead Rhetoric: You have an incredible talent pool in Sweden not only for the extreme/ melodic death metal scene, but now a rising traditional/ power pool with acts like Bullet, Enforcer, Steelwing, RAM, In Solitude, and others. How do you feel things are going as far as live support in Sweden, and where do you see the biggest supporters for Ambush?

Dead Rhetoric: For overall value to the metal genre, when looking at their total output, where do your preferences lie: Accept, Judas Priest or Iron Maiden?

Jacobsson: (laughs). All three of them I would say! I love bands, it’s hard to pick one band. My musical influences come from a lot of sources. If you should pick one band, it would be Judas Priest for me at least. It’s so close, I love Iron Maiden and Accept… it’s hard answering that question. There are a lot of good American bands, Riot is a big influence, Satan from the UK too.

Dead Rhetoric: What short term and long term goals do you set for the band? Do you think it’s possible to get traditional, power oriented metal back to a headlining, arena level on a consistent basis?

Jacobsson: While bands like Iron Maiden and Judas Priest are getting older, the interest in this kind of music is not going to die. I think over time people will seek out new bands that will fill the arenas. I am not sure if Ambush will fill an arena, but I would love to. I would love to get a good response with this album and start something really cool.

Dead Rhetoric: How important is band art to the total presentation for the band?

Jacobsson: It’s very important. Adam (Hagelin), one of our guitarists is a painter and artist. He’s always trying to find new ideas for concepts. For the Firestorm and Desecrator albums it was Adam that drew the first sketches. We knew what we wanted, and then we hired an artist from Germany, Alexander von Wieding to paint it. He’s amazing, the nicest and most talented guy we’ve come across so far when it comes to art.

Dead Rhetoric: Are you a collector in the heavy metal world- if so, what do you consider some of your most prized possessions?

Jacobsson: I don’t know. I’m very much into 70’s prog, I have a lot of vinyl – 400-500 pieces that I really love. I really love this Finnish act Pekka Pohjola, I have finally got all of those albums.

Dead Rhetoric: What can you tell us about the Ambush brand of beer that I saw pictures of from your official Facebook page?

Jacobsson: Ha ha! We have a friend who is basically making his own beer, and he’s in love with creating those kind of stickers you put on beers. They are very limited, it’s mostly the band members who have those beers so we drink them when we are partying at home.

Dead Rhetoric: What does the rest of 2015 and early 2016 look like in terms of touring, videos, special merchandise, opportunities?

Jacobsson: We will hit the road in November. First we will play a show in October with Screamer, they are coming back with a new singer. We will support them for their comeback gig in Sweden. Then we will go to Germany, Switzerland, and Austria in November. In March we will do a bigger tour I think, it’s not fully 100% booked, about 90 % booked at this point. We would love to play the United States – for a smaller band like us to do a big tour, it’s pretty hard. We will work towards that goal, we want to play in North America and South America. 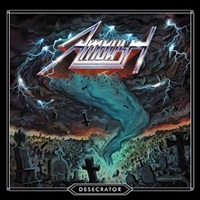