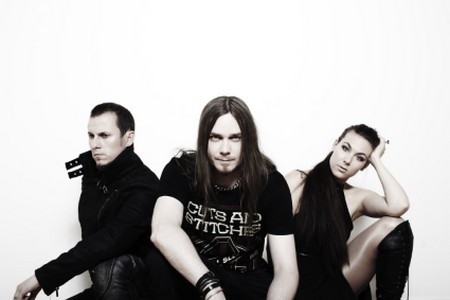 Dead Rhetoric: On the other side of the spectrum, with the band’s quick rise in popularity and poppier elements, there also seem to be people that seem to want to dismiss you and “hate” on you on the Internet. Do you take those kinds of things in stride?

Ryd: I get sad because I don’t like hate in any way. I don’t understand why you should hate someone that maybe doesn’t fulfill the things that you like, because you can’t please every person on this planet. It would be impossible. I wouldn’t change my ways singing because of some people hating me for how my voice sounds. I could sing more hard but I also think that one of the things with the band is that we want it to sound poppy because then the contrast between my voice and Jake’s voice gets bigger. I love pop singers myself, I grew up listening to ABBA and other great poppier artists and I like that. We know not everyone hates me for it but it’s sad that people decide to hate other people. It’s something I just have to live with I guess.

Dead Rhetoric: You’ll be back in the US soon with Within Temptation. Do you think this tour will help you breakthrough over here?

Ryd: That’s what we are hoping for. We’ll see during the tour how we develop and if we can reach Within Temptation’s fans. All fans are different; maybe they don’t want to let anyone else in or maybe they are very open-minded. So we hope that they are going to help us out a little bit. I hope most of all that the audience will like our performance and our sound. And they already like female singers, which is also something that some people tend to hate; like we are not welcome in this business. It feels very good to have fans that accept female vocalists.

Dead Rhetoric: With your live act, having three singers, is there a lot of energy on stage when you perform?

Ryd: Yes there is. What we hear from the fans is that instead of having only one front person, they have three to look at. It’s three-times the energy from one front person. And we are so different; the three of us, so there’s a lot of energy going on there. That’s what we like actually, we like to spread positive energy and make people jump around and have fun.

Dead Rhetoric: Sometimes I don’t think there’s enough “fun” in the heavy metal genre so it’s nice to have that contrast.

Ryd: Exactly. Everything is about having fun when it comes to our music. That’s exactly why I chose this. I could have chosen to be a pop singer. I used to be a musical artist so I did cabarets and stuff like that. That was how I started my career, then I met these people and they thought there was too much depression and darkness [in music]. My brother was a growler in a band, and he started taking drugs and he passed away. So I lost a big part of my family because of depression so my goal with this band was to try to change that and make people happy. If you go into depressing music it won’t help you. So we try to give the young people some positive energy. That’s most important for me, and why I don’t care so much about these “haters” because they don’t know my story and why I’m here doing this.

Dead Rhetoric: As a follower of your fan page, about how many Internet marriage proposals and “I love you” messages do you get every day?

Ryd: [Laughs] Yeah that happens quite often nowadays. I have a relationship, and I’m not married. And I wonder how many girls get so many marriage proposals before getting married. But I love that; they [the fans] are so funny.

Dead Rhetoric: It’s good that you take it that way, and you don’t get offended by it all the time.

Ryd: No, absolutely not. I mean I can’t say yes, and I understand that it’s not necessarily serious. It’s like one of the best compliments you can get.

Dead Rhetoric: I was told that when you played PowerProg here in the US, there was an issue with the backing tapes for one of your keyboard parts and you almost didn’t get them in time to play. Was that a scary moment for the band?

Ryd: Yes, it was awful. That was one of the things you just don’t want to happen. Especially if you only have one show. You fly all the way from Sweden just to play this one show and your back tracks get stuck in an airport. One bag got lost in Germany or something. What we had to do to solve the problem was call Jacob Hansen and we asked him to send the backing tracks, as much as he could. We put them into Morten’s iPod and we played them from there. I think we received the last song 5 minutes after we were supposed to go on stage. It was a very stressful moment. It was good that we at least got on stage and could play some of the songs. But it was not the best show, since we were a bit confused. The funny part was that in addition to that, I had an infection in my foot that I got in Mexico, from cutting myself on a razorblade. So I had a fever and was taking medication that made me dizzy, so there was a lot of stuff going on there. So it was a very unforgettable evening at ProgPower.

Dead Rhetoric: So you will be touring in the US soon, what comes next for Amaranthe after that?

Ryd: We’ll be going to Japan to play Loud Park; then we are heading to Mexico, and back to the US. There’s also a show booked in Russia in December. I am personally going to be doing a Finnish Christmas show, where we play in ice hockey arenas all over Finland. In 2015, we are planning to continue touring through Europe and Australia hopefully.

Dead Rhetoric: You said you were coming back to the US, is that going to be a headlining tour?

Ryd: Yes, that’s what I have heard that we are planning. I would love that. We are definitely trying to arrange that right now. I will let you know when it gets booked; I will post it on all my social media.