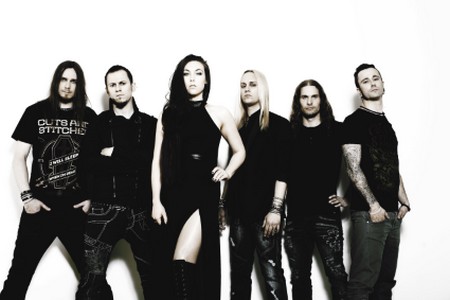 If one band can be cited as an example for an explosion of success in the past few years, it’s Amaranthe. With their 2011 self-titled debut, the band made waves with their infectious combination of melodic death and power metal, alongside electronic and even pop influences. Featuring three vocalists (male and female cleans and a growling vocalist), the debut sounded fresh and energetic and already seemed to command a sound that was uniquely their own.

Fast forward to 2014 and the band is currently awaiting the release of their third album, Massive Addictive. Appropriately named, their latest release sees the band evolving their sound to the next level. There’s more dynamics, more melodies, and yes, more non-metal influences that saturate the band’s music in the best way possible. Massive Addictive showcases a band that knows who they are and plays to their strengths, without sounding like a simple retread of previous successes.

Certainly a part of the band’s success is due to enigmatic front woman Elize Ryd. Her powerful vocals have quickly become a defining characteristic of Amaranthe. Not one to shy away from her fans and seemingly grateful for the success the band has experienced so far, we at DR decided that the time was right for a discussion of the upcoming album, her fan interactions (both positive and negative), and their imminent tour with Within Temptation.

Dead Rhetoric: The third album is always a big one for any band. What did you want to accomplish with Massive Addictive? How does it differ from your previous albums?

Elize Ryd: We felt that we needed to step up our sound a bit. We’ve had some ideas from the very beginning that we weren’t able to do with the first two albums. For the third album, we wanted to do everything and we wanted to it to sound the way we wanted it to from the start. It’s hard to get the right sound from the beginning; we have been out touring and meeting the fans and have seen what they like, so we felt it was definitely the right time to step it up a bit. More hard, more dance, more of everything.

Dead Rhetoric: You’ve recorded with Jacob Hansen with each release. Do you feel he is an integral part of your sound at this point?

Ryd: Absolutely. He knows our sound so well at this point. It would be hard to change to someone else. This recording went much smoother than the last two because we didn’t have to give him so many instructions. He knows what we want and makes it perfect from the beginning. It was a very successful recording. We are very happy with his work, and he makes us sound so good. I don’t know what we would sound like if we worked with another producer. He’s definitely a big part of our sound.

Dead Rhetoric: With three singers in the band, do you ever have any debates about who is going to sing which part?

Ryd: Yes, absolutely. On this album, we wrote some of the music separately. Olof and I wrote a few songs, like “Drop Dead Cynical” and “Massive Addictive” and we decided in the studio for most songs for who is going to sing which part for a few songs. Usually we write the song with the vocalist in mind. It’s usually pretty easy to decide. We can discuss things like “who should start singing this song” and “it sounds better when you sing this part in each verse,” especially between myself and Jake. On Massive Addictive, for two songs, we both [Jake and Elize] sung the whole song and it was decided in the mix who would sing which part. I sang certain parts and when I finally heard the results it was Jake singing those parts and I was like “hey, what the fuck” and vice versa. So sometimes it’s complicated but it’s always fun.

Dead Rhetoric: When Andy [Solvestrom] left last year, was there ever a point that you thought you would just abandon the growling vocals or would that ruin the dynamic of the band?

Ryd: There was never a discussion to get rid of the growls. It’s one of our things that we are three singers and something that is unique to our band. So we never thought about getting rid of that. The replacement went very smoothly since Hendrik [Englund] did two tours with us. He was with us for the whole US tour, but he was not officially the singer at that point, but just a replacement for Andy, since he had kids and wanted to stay home with his family. Hendrik worked well with the group and he’s a funny and talented guy. He’s also very open-minded in the writing process, which we appreciate. So it felt very natural to keep him as our growler.

Dead Rhetoric: With Amaranthe’s sound, do you have a lot of non-metal fans? It seems there is a lot of room for crossover.

Ryd: Yes, there are. We see it when are playing live. There are so many different kinds of people. Everyone is the same inside, but the way they are dressed they look so different and I love it. It’s also the way that we are in the band. I love to say that we connect people through the music. Even though maybe they thought they didn’t like the same things. We have the black metal-looking guys and girls, and the sleek and dressed up guys, and the sporty guys, so there are so many different people at our shows. One of the things of having three different singers is that we are three different characters, and we have so many different styles in our music. It speaks to more than just one group of people and we allow all people to feel welcome, no matter how they approach us.

Dead Rhetoric: Amaranthe has had a lot of success pretty rapidly. Are you ever surprised at how big the band has become in the last few years.

Ryd: Yes, especially now when we are releasing our third album. We have more interviews than ever and the promotion has grown. It seems like everything has stepped up. In our photo shoot, we had real stylists and make-up artists, and Iron Maiden’s photographer. I was surprised when we did the US tour that there were so many people that knew about us. We didn’t know before going and were wondering if there was going to be 20 people or 200 people in the audience. But there were a large number of people at each concert. You do get a bit surprised, and in Europe we already have a very big fan base so we’ll see what happens when the album comes out.

Dead Rhetoric: You come across as very appreciative of your success. Do have any particular interactions with fans that you have really enjoyed?

Ryd: When we played in Russia, during “Amaranthine,” everyone in the [Amaranthe] fan club brought one flower each and had bubbles that they blew. The whole concert hall was filled with bubbles and red roses and I thought it was so beautiful. That was one special moment that I remember.

But of course, I just love my fans. They are so cute. On my Facebook page, we have close contact, and I feel it’s very nice to be able to do that. People share stories with me about things that have happened in their lives and how I’ve helped them through Amaranthe’s music to get hope and move on in their lives. To hear that makes you very proud and happy. And I wouldn’t be able to hear that if I didn’t have my page where people could write stuff. I don’t have that many fans [compared to Alissa Gluz-White] and it might be harder to keep the closeness with the more fans you get but I will always post those private things there. I like [doing] that, I think it’s very important, especially for young people, to see that I have a normal life. So we feel connected in that way.