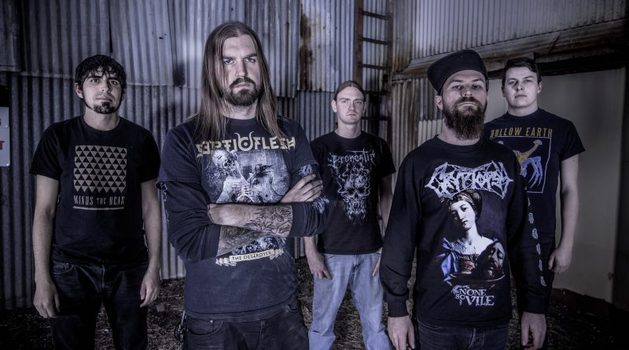 With album number four, Proponent for Sentience, recently being released [back in September], it seemed that even more people were starting to turn their heads towards Allegaeon. Their brand of technically-driven melodic death metal appearing to finally win over the metal legions with their display of frantic yet memorable riffs and intriguing science-based concepts, along with some help from their solid take on Rush’s “Subdivisions.”

But it’s not all good times, as the band has struggled with finances, which led to the creation of a Patreon account, which was unfortunately received by many outside the band’s following as somewhat controversial, despite their best intentions. Topping it all off is that longtime bassist Corey Archuleta decided to step down following the band’s current tour. Speaking of which, the band is out and about on the road on the Winter Warriors trek with Battlecross and Necromancing the Stone. And as such, DR caught up with guitarist Greg Burgess and vocalist Riley McShane on one of two drummer-less nights [Clifton, NJ] to talk about all of these things and more.

Dead Rhetoric: Obviously there is a lot of crowdfunding at this point – what was your motivation for the Patreon, other than keeping the band above water?

Riley McShane: There’s lots of options when you get to the bottom of the well. When you are in debt and not making enough money by other means. One of those options was to get a loan from the bank. Which we got denied for. Our individual credit scores weren’t good enough, which is kind of funny because the only reason that we can’t build our individual credit is because we can’t hold gainful employment long enough to stabilize our income and build our credit. So we were going off of the band account, which was not enough. At that point, we looked at some other options. We looked at what other bands had done – and what Ne Obliviscaris had done. We watched this TED-talk/Skype-style thing that he had done, which was like an hour long, that took place down in Australia. He explained the situation – being a touring band and trying to come back and find work…the things that have been talked about by everyone in touring bands. As soon as you see it, you just say, “Yeah, that’s what we are doing.”

Beyond that, at this point in Allegaeon’s career we have a large enough fanbase, that it seemed like a viable option. To not just do a one-time crowdfund GoFundMe/Indiegogo/Kickstarter-type thing, but to give fans a platform to engage in a fan club-styled thing, where they get things once a month/a few times a month based on their subscription tier. But because it uses that “this much money gives you this reward” design, a lot of people took it the wrong way. They viewed it as us crowdfunding to get out of debt. That was not necessarily the case – it was like, we are finally at the point where we have enough fans that we can substantialize our income by doing a fan-club type of thing, and Patreon just happens to be the best platform for that in the 21st century.

Greg Burgess: It was definitely a misstep in our case – because we totally aimed it at our fanbase, who know that we are jackasses and don’t take ourselves seriously. We were dealing with a pretty serious thing to us – how we get through our daily lives is that we are going to make fun of it or we are going to kill ourselves. When people who don’t know us see Riley and I laughing our asses off and saying, “We need money” [it looks different]. At first I sent the video out to a few of my friends, who love the band and who support Ne Obliviscaris…fans had been telling me that we should do this. So I sent the video to a few people asking if it was too silly and they all said, “Nope, that’s you.” So when we put it out, it was fine for a few days, but then all hell broke loose. So it took us a few days to see what everyone’s problem was and then it was like, “Man, if you don’t know who Allegaeon is, holy shit did we come off like assholes!” That is 100% on us, not being conscious of it, but at the same time, we didn’t make it for everybody…we made it for the people who would give a shit.

McShane: It was definitely something that was aimed at our fans that just came out weird in the public eye. But at the same time, as much as we did make that misstep, the extrapolation of the situation and the misinformation of facts that were spread between a few articles was silly.

Burgess: Some of it was just straight-up lies!

McShane: There were some details in those articles that we were like, “Who the fuck are you talking about?” There were some really silly assumptions on those journalists’ parts that weren’t actually applicable to the band.

Dead Rhetoric: With all of the backlash, do you feel that it helped spread your cause?

Burgess: Absolutely – the publicity was awesome. We actually gained a lot of fans from it. A lot of people were so pissed at how we were being treated that they were just like, “Fuck it, I don’t know who you are but I’m going to contribute.”

McShane: It also inspired the ones who were already on board to up their contribution, just to give a middle finger to the people on the other side of the coin. It made our pre-existing fans say, “Well I was going to do 10 bucks a month, but now I’m going to do 20 bucks just because…fuck you guys.” It definitely helped.

Burgess: It was very strange. There were a lot of important people that came out in support of us too, which we didn’t expect. Metal Blade has been amazing, our agent, and everyone has been super awesome about it…with some explanation. There was some fallout, but once we explained what was actually happening, it was really cool. For as much hate as we got, we got a lot of love too. Our fans…well, when they were sending death threats to other artists that wasn’t good, but they definitely had our back, which in some instances, felt really good.

Dead Rhetoric: So are you happy with the direction that it’s going in? Do you have any long-term goals other than those in the campaign itself?

Burgess: The goals that we spelled out in the campaign were almost another misstep, because everyone took it super seriously.

McShane: Like, “Why do you deserve so much money?” We have had to explain on multiple occasions that it is not a goal that we feel entitled to, or even expect.

Dead Rhetoric: I’m not sure that some people grasp the fact that you have to divide this among five people either…

Burgess: Even still, we could have said a million dollars and it wouldn’t have made a difference.

McShane: There’s just no reason to put a ceiling on this kind of campaign and bottleneck the potential growth. It’s not like we are like, “We need to make X amount of money a year or we are going to quit!” That was so dumb – people thought we were holding our fans hostage. It’s like, “Guys, it’s a fan club, you need to just calm down.” But in no way did we expect anything like that, but it’s bad business to put a low ceiling on something like that. You aim high, you hit high…or you miss high.

Burgess: I will say, we’ve had a lot of fun with it, because of the interaction we have gotten to do with our fans. We have had a music video that no one but the Patreon fans have seen. I’ve done a guitar lesson, we’ve done some playthrough stuff that they are going to get. They get a whole bunch of stuff before the general public gets it…what I was working on when you came in, they get it before anyone else. It’s been really fun in getting to engage with them on a more personal level. It’s easier to do that [now].

McShane: Which was kind of the whole point. We offer our fans a platform to subscribe to an extracurricular service that doesn’t usually come along with bands. So we try our best to provide something to them that creates a stronger bond between band and fan. That’s definitely been successful thus far.

Burgess: You’ll never see Allegaeon do a meet and greet. I hate it. I feel slimy when I’m like, pay 60 bucks and come hang out with me…I’m going to be at merch after the show! Just come hang out. There’s nothing wrong with bands that do that…I just have a personal apprehension towards it. I would feel like shit. So there’s lots of ways that bands have come up with ways to make extra money and that’s one of them. We refuse to do that…I find it offensive, personally. I’m not telling bands that it’s bad, but in my personal opinion, I don’t like it. Paying to get my autograph? I’ll do that for free! The only thing money lets you do is forget about money. No one gives a shit about money, we just want to go play music.

McShane: When money starts to get in our way of being able to do that, that’s when we look for a way to stabilize our income in such a way that we don’t have to worry about it.

Burgess: If we aren’t stressed, we can put on a better show and we can put out better stuff for people. This whole thing [Patreon], it’s putting the power of the band’s success in the hands of the fans, which is cool!

Dead Rhetoric: Switching gears…this is the last run with Corey [Archuleta] – is this a bittersweet tour in that regard?

Burgess: Yeah, but it’s been sad for other reasons – Brandon’s [Parks] dad passed away on Thanksgiving. The dude is like my hero – he came back from the hospital and was like “Let’s jam. We are going – life goes on.” Yesterday morning he had to fly home and today he’s at the funeral. The fact that he’s flying back for the show tomorrow – it’s like, “oh my God.” We had to scramble in how we were going to play with the drum machine. It becomes more like an Allegaeon comedy show! But it’s better than cancelling – creative solutions to challenging problems. It’s overshadowed the Corey thing [at the moment]. But at the same time, with all the sad things, we haven’t had vehicle problems. Necromancing is on their fourth vehicle, Battlecross is now in a rental – it’s been a rough week. But despite it all, it’s been an incredibly fun tour. We are all friends and we love hanging out with the other bands. Truly it is winter warriors – everyone has earned the warrior title and we are all getting through this. It’s bittersweet but everyone is being positive and we are having a great time.