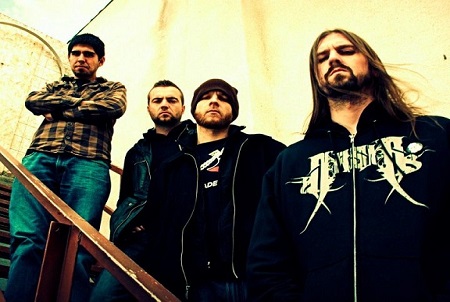 With what is perhaps one of the more difficult names in metal to spell (vowels, anyone?), Colorado’s Allegaeon [pronounced “uh-lee-juhn”] have just released their second album, the aptly-titled Formshifter via Metal Blade. The follow-up to 2010’s well-received Fragments of Form and Function, the quartet was quickly thrown to the U.S. tour cycle wolves alongside The Browning and The Devastated (two bands they both blow away), quickly learning that it’s a long road to the top if they want to keep on tech-ing and rolling.

The band’s frenetic take on modern technical death metal is refreshing and to a marginal degree, futuristic. With a cacophony of guitars going in and out of melodic territory and song structures that are scatterbrained as they are adventurous, Allegeaon are on their way to setting themselves up for a nice long career, especially if they keep pumping out mind-melters such as “A Path Disclosed,” “From the Stars Death Came,” and “Timeless Dissonance.” Better yet, they refuse to take the deathcore plunge, this aligning themselves with such high-caliber bands such as Obscura, Arsis, and Desultor. With this in mind, we grabbed vocalist Ezra Haynes for a quick round of questions. Here’s how the frontman responded…

Blistering.com: You’re on your second album, and for most young bands it’s a pivotal moment, especially after having such a strong debut. What was the band’s mindset going into the writing for Formshifter?

Ezra Haynes: There wasn’t much time to really have a mindset. We just finished up with the Metal, Arise! tour at the end of August 2011 and immediately went into writing mode for the new record. We hit the studio early December so we had roughly three months to turn out a product for an early 2012 release.

Blistering.com: Did the fact that you had such a short amount of time in addition to having a new drummer put some positive pressure on the band?

Haynes: I didn’t end up getting to the studio until mid-December, It was pretty nerve-racking. With having such a short amount of time to write the record, a drummer on the other side of the U.S. and never once having a rehearsal we really didn’t know how the record was going to turn out, after hearing all the pieces coming together I think it relieved a lot of the pressure. We’ve always been pretty efficient in the studio. For the most part, I feel the whole experience was pretty positive.

Blistering.com: Will the drum position forever be a thorn in your side?

Haynes: God, I hope not. We have a few prospects at the moment, it’s nice to work with studio/touring drummers but ideally, to actually have someone be a part of the Allegaeon family would be key.

Blistering.com: In terms of the songwriting for Formshifter, was it a matter of honing in on the strengths of Fragments of Form and Functionand improving upon them?

Haynes: Stylistically, Ryan [Glisan] and Greg [Burgess] did manage to keep that core Allegaeon sound while incorporating sub-genres and expanding with their instruments. I really look up to those guys, they’re in a constant battle to improve their playing and challenge themselves, both musically and technically. I myself wanted to maintain the pronounced style of screaming while showcasing more of my lows on this record.

Blistering.com: You hooked up with Daniel Castleman [As I Lay Dying] for the album’s production. What was it like working with him?

Haynes: I absolutely loved it. Daniel is incredibly down to earth, has great ideas and is one of the most professional engineers I’ve ever worked with. When our living situation fell through in San Diego, he opened his house up to us and made sure we were taken care of. We should probably hook him up with some gas money some time.

Blistering.com: Was it beneficial to be working away from your Colorado locale in California?

Haynes: California is by far my favorite place to be. If I wasn’t living in Colorado, I would be residing in California. Recording there really gave me that “vacation” feeling, which made it more fun than work. Having everybody fly out to record was pretty nice. We were all on the same page and didn’t have anything to get in the way of the process. When we record in Colorado we all have to deal with “home life” which in some cases can be a distraction. I’d prefer we always travel to record. It’s a great feeling.

Blistering.com: The album cover is a simple, yet effective image. Colin Marks is known for his elaborate artwork, so was it hard for him to tone it down?

Haynes: We just gave him the idea and he went with it. We didn’t ask him to tone it down by any means. Eventually the music will speak for the artwork rather, than the artwork speaking for the music. He was probably stoked to not have a million things on the album artwork “to do” list. That can be a real pain in the ass for graphic designers.

Blistering.com: On Fragments of Form and Function, you tackled topics like quantum physics and stem cell laws, so what was the focus onFormshifter?

Haynes: Some of the songs are still science related. I wouldn’t say there was an actual predetermined focus on lyric topics. We kind of just went with it.Formshifter touches base on religion, media, serial killers, science and of course a song related to a natural disaster, which we put on every record.

Blistering.com: Since you used the word “form” in both album titles, is there a direct thread between them?

Haynes: I like to look at it that way. A shift from the past. We’re still at a point where we are consciously trying to outdo the last record.

Blistering.com: There’s still an onus on technicality on the new album, but like your debut, you are able to compartmentalize things in actual songs. Is it a struggle when trying to not go overboard with technical parts versus trying to write a solid, digestible song?

Haynes: Greg and Ryan really have a good ear when it comes to that. When they’re noodling around they tend to keep it interesting. Yes, all Allegaeon songs have a great deal of leads in them, but they’re tasteful and still leave breathing room for the other interments. We’ve always been a band that believes in a structure of some kind and that really helps.

Blistering.com: Do you plan on being more active on the live front in support of the new album?

Haynes: We’re currently trying to hammer that out. There’s nothing more that we would rather do than tour every day in every country. It’s a little rough right now trying to land a solid booking agent and a full time drummer, but I really think it’s just a temporary problem we’re dealing with. Eventually, everything will work out for the better. We do plan on hitting the road here soon in support of Formshifter.

Haynes: We’re currently looking into filming some music videos, landing a full-time drummer and getting on the road this fall. We’re already writing new music for the third record so, I imagine we’ll be looking into studios possibly by the end of this year or mid-2013.