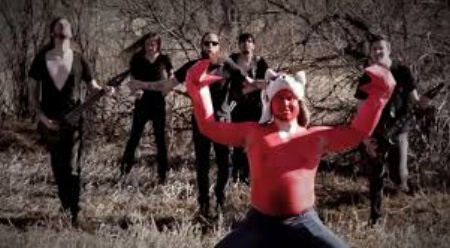 Dead Rhetoric: There seems to be a lot of continuity in your albums, such as “From the Stars Death Came” leading into the ice age track; there’s always a vals track on each album. How do you keep continuity from becoming repetition?

Burgess: As far as “From the Stars Death Came” to the ice age tune, it’s part of a larger idea. Ezra is really into natural disasters so he and I came up with this idea of putting a natural disaster song on each record and then play them all live in order so that it makes one whole story of the Earth. “Nexus Terra,” “The Cleansing,” “The Renewal,” “From The Stars Death Came,” and “Through the Ages of Ice” are the five songs that are a part of that suite now and we’ll do a couple more after a few more records and we’ll play it live. By then we’ll be able to afford a projector [laughs] so we’ll have a whole movie going with it so there is a visual representation of this big, large disaster suite for a DVD release at some point. We have many years ahead of us still at this point, but when it’s done, it will be really something special for the people at that show, and we’ll probably have to tour with that in mind.

With regard to the vals, it just means waltz; we’ve done three waltzes. After this record, I’m going to stop doing vals. I might do a tango with the next record, I don’t know. I just wanted a group of three waltzes, and I’m now going to go do other styles.

Dead Rhetoric: You worked with Joe Ferris for the orchestrations on Elements of the Infinite. Did you get acquainted through the last Cryogen album?

Burgess: Cryogen made a Kickstarter for their last album [Continuum] and Joe was looking through Kickstarter for projects to work with. On Cryogen’s previous record, Despara, the drummer at the time was a part of the Colorado symphony and he brought in a few guys to do a string quartet piece and they wanted to continue something like that on Continuum. Joe said he had terabytes of orchestra samples and offered his services. We listened to his stuff and we were blown away. Before the Cryogen record was done, I asked to work with him on the next Allegaeon record. He was into it immediately.

Pretty much everything on the Cryogen album (orchestration) was me and then Joe would just go through and flesh it out and make it better. They call me “the help” in Cryogen, as I don’t write a lot. I love the band so I just kind of go in and help out with writing a little here and there and putting some solos on it. As much as I love it, Cryogen isn’t really my band, so we pulled out all the stops for him with Allegaeon and let him run wild. Sometimes I’d have him re-do something I wrote with his samples and other times I’d just give him something and tell him to write something for it. The ice age track is 100% Joe Ferris. He just killed it.

Dead Rhetoric: You are very active with your Facebook, Twitter, and social media. You’ve been putting up little 15-second song clips with Ezra’s meaning to each song on Instagram/Facebook. How has the fan response been to that so far?

Burgess: I couldn’t tell if people were pissed off or not because the clips were teasing them.

Stancel: Mostly they were saying “why only 10 seconds?”, because that’s all we put on Instagram.

Burgess: But every reaction we’ve had so far has been positive. Given the amount of blue-ball comments, I’ll take it as a compliment. I’m sorry we’ve been teasing everyone. It’s all to encourage people to help us out with first-week sales, which goes a long way towards helping us build our career.

Dead Rhetoric: Completely switching gears here, how does it feel to have one of the most mispronounced and misspelled band names in metal?

Burgess: [Laughs] I like it; I like hearing how people pronounce it. I think it’s hilarious. We like to make fun of ourselves (see the “1.618” video) too. How the name came about was we were called Allegiance and we were getting litigation letters. So we decided to come up with a name that no one had that was similar to Allegiance. So we just took “Allege” and “Gaeon” and put them together and pronounced it Ah-lee-juhn. I love it when people ask me what it means because it means absolutely nothing. It means we are not going to get sued. No one is stupid enough to try to say they own this name.

Dead Rhetoric: You’ll be touring with Chimaira along the west coast, are you planning on hitting up the east coast soon?

Burgess: We have a tour that should start about 2 days after the Chimaira tour ends, so we don’t even get to go home. We are just going straight to the east coast. I’m actually from Washington D.C.; I grew up down the street from the first venue I played at as a child and have never played there with Allegaeon. I’m super stoked to play my hometown for the first-time ever. There will be a lot of east coast dates; so we’ll have effectively played the entire US in about two months.

Dead Rhetoric: You haven’t played Europe yet have you?

Burgess: No, that’s actually the main goal of the record is to finally get overseas.

Dead Rhetoric: In “The Phylogeneisis Stretch” you talk about Goldilocks zones. It’s scientifically logical that life follows the same rules (like DNA). But do you think that it’s possible that there is life out that there that doesn’t even play by those rules?

Burgess: Absolutely, life as we know it is carbon-based, but there’s nothing to prove that there isn’t something else-based life forms out there. I think the universe is a very strange place, and “life seems to find a way”, to quote Jurassic Park.

Dead Rhetoric: If we found life in space, what do you think the ramifications would be for the world?

Burgess: I’d like to think to believe it would bring humanity together, but probably not. Ultimately I think someone would do something stupid to try to benefit themselves.

Dead Rhetoric: As a science teacher, what do you think the most interesting track off Elements of the Infinite if I were to use it with my students?

Burgess: I think “Dyson Sphere.” We don’t have the technology to do it but the thought process behind it is very intriguing. To build a superstructure around a star to harness its energy is pretty badass.