Allegaeon – Beyond the Elements 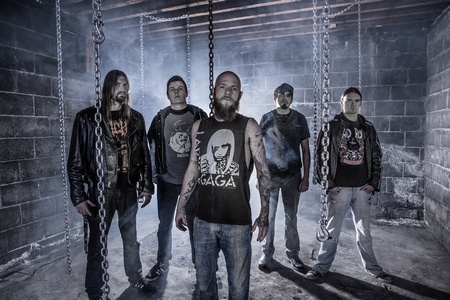 There’s been much going on in the Allegaeon camp as of late. First, they lost long-time frontman Ezra Haynes earlier this year (Son of Aurelius’ Riley McShane has been the fill-in for the past two tours). Then the band announced they would be doing a co-headlining tour with labelmates Act of Defiance. In addition, they’ve been writing away for their fourth album, as Elements of the Infinite was released in the summer of 2014.

Trekking down to Saint Vitus Bar in Brooklyn on Friday the 13th, the band hit a bit of a snag – their tour van suffered an expensive breakdown. The band still made it to the show though (with spirits higher than one might expect given the circumstances), and DR was able to chat with guitarists Greg Burgess and Michael Stancel, along with drummer Brandon Park before the band’s set. Plenty of information on their upcoming album awaits, in addition to some insight on tours and influences. An enjoyable chat follows below, which also included Burgess’ dead-on upstate NYer “grim face” (unfortunately this could not be captured in audio form).

Dead Rhetoric: Ever since Elements of the Infinite was released, you’ve had “the crab” on stage. Is this something that you are going to continue with from this point forward?

Greg Burgess: I feel like the joke has kind of run its course but yet people still want it.

Michael Stancel: People still want it, but since we have to see it every day…

Burgess: Especially the guy playing the crab [Myles Pfaus] – he is miserable.

Stancel: Maybe in a couple months, or when we put out the new record – we’ll hang it up like they do with a hockey jersey when someone retires. We’ll do that in someone’s garage.

Burgess: When we get a projection system, I want to just film him doing it so he doesn’t have to do it anymore. So if people still want it it’s there, and we don’t have to see it.

Dead Rhetoric: This is your second time out with Riley McShane filling in on vocals, do you think he’ll be taking over Ezra Haynes’ position full-time?

Burgess: 99.99%. He’s awesome. It’s been so great. It started off as him just filling in, and with Ezra going it felt like a perfect fit. I’ve been a fan of his for years. We’ve been friends since like 2010, so he was my first choice, and he really wanted it.

Dead Rhetoric: And he’s been fitting in well I take it…

Burgess: Yeah. The first tour we did – I don’t think he was familiar with our shtick. We are jackasses, we are not serious people. So he was trying to be serious, and we were like, “that’s not really our thing.” It took one show on this tour and he just “got it.” Since then he has fit right in.

Dead Rhetoric: Obviously people are upset that Ezra has left the band. Do you feel those are big shoes to fill?

Burgess: He definitely has a target on his back. It’s mainly because Ezra was such a great personality. People loved him; we all loved him. He was a great dude. Life’s funny, the way it happened. We are stoked to continue, and I know he [Ezra] is stoked for us.

Dead Rhetoric: You are also playing a new track on tour – how’s the reception been for that?

Stancel: It’s been great! I haven’t heard anyone say “oh that sucks. [all laugh]” Seriously, a lot of people have come up and said they really love it.

Brandon Park: I think everyone has said something good about it.

Dead Rhetoric: So when do you think we’ll be seeing album number four?

Burgess: Well, the album is done. It’s all demoed. We are extremely excited about it. I think it’s better than Elements to be honest. We just couldn’t get an earlier recording date. So we will be recording in February. For the last few months we have just been hanging out. We actually have a lot of songs done for album #5. I’m really excited about that’s turning out, and Riley’s writing with us. He plays guitar, and he can sing! I walked into the green room and he’s singing Andrea Bocelli – he’s singing an aria. Just to have a guy that works as hard as he does, it’s been amazing. He has so many weapons at his disposal, we’d be stupid not to use them. Album #4 turned out a little more melodic than some of our other stuff, so we made a concerted effort that five is going to be brutal. We didn’t mean for it to be as melodic, it just turned out that way.

Dead Rhetoric: Given McShane’s clean singing ability, is that something that you are going to have him get into with Allegaeon?

Park: He [Riley] acts like he really, really does not want to.

Burgess: He feels that he ruined Son of Aurelius. Under a Western Sun was one of my favorite records of all time. I am 100% pro for him doing it. But the other thing is that we want to do it slow-burn, so people can get used to it.

Stancel: It seems like every band does 3-4 heavy albums and then “now we’re singing, and now we’re lame.” We want to avoid that.

Burgess: We don’t want to piss off the fans either. We now have a new singer, so if we experiment it is going to be a slow-burn. We want to have a guest vocalist on the next record, and he does a lot of screaming and singing. He’s a notable guy, I’m not even going to tell you who it is until it actually happens. But we would be stupid if we get that guy if we don’t do both. So I think that will be our first little jaunt into it. If we do it, I definitely want to avoid the pattern of “every chorus is a clean” song. I don’t want to fall into that trap at all. We are a death metal band; that’s the way we started. I really liked how The Faceless did it on Planetary Duality – every once in a while. It became more of a texture than a formulaic thing.

Dead Rhetoric: Any other hints you can give to album #4 right now?

Burgess: I don’t want to say the name of the record, but I will say that there is a 3-part sonata on it. There’s three movements to it: one that opens the record, one in the middle, and one that closes it. Then we will play them all as one piece live. It’s like a 30-minute concept record of three songs. The entire album is over an hour at this point. There’s more tracks than we’ve ever done before. The last record was mainly me. But now that we have these two guys (Brandon and Michael), their contributions have been awesome. Some of Mike’s songs have been amazing. I’m super excited. That’s part of the reason I think the next record is going to be so good. It’s more of a band coming together than just getting by, which is what I thought Elements was. It was just trying to keep going, with a huge member change as it was.

Dead Rhetoric: You had said that after Elements, you were done with the Vals. Are you going to start something new with this one?

Burgess: Yeah, there’s a tango on this one. It’s kind of weird – it’s like a tango but then it evolves into like a Jewish dance at the end. It’s really weird how it morphed, but I’m pretty stoked. I have to go and polish it – that’s like the main thing I have left to do. I’ve got some orchestra stuff to do, and that, and a few solos I’d like to make a little bit better. I’m really excited how it is turning out.

Dead Rhetoric: Are you going to use the same orchestra guy you collaborated with for Elements?

Burgess: Joe [Farris]? Yeah. We are doing much more with him this time. It’s more than just orchestra. We are doing some synths and stuff like that.

Dead Rhetoric: People finally seem to be coming around to you guys after three albums, how much do you think finally getting on some tours have helped in that regard?