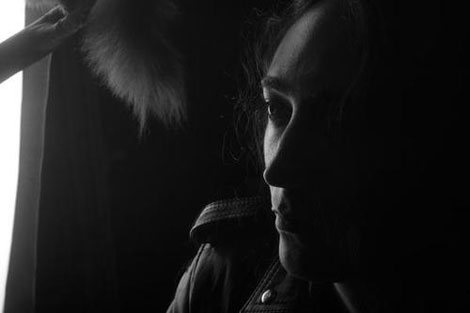 Rarely do we equate beauty and optimism in the realm of metal. This is not a pretty nor a fancy style of music – just reference the inordinate amount of black/death/grind releases that come down the pike every year. Sitting on the other side of the fence is hard thing to do, so when Alcest released their Souvenirs d’un autre monde’s in 2007, it hit everyone like the proverbial ton of bricks. It was emotive, sweeping, joyous and somber all in one fell swoop. The initial magnum opus from mainman Neige was a universal success, thus baiting everyone for a follow-up.

Écailles De Lune emerges as the successor to Souvenirs… and while it’s the not emotional gut-fuck of its predecessor, it adds new colors to Alcest’s magnificent pallete. Dark hues and shades come into the picture, provoking a black metal angle that was lurking last time around, yet the band’s trademark beauty and grace are still intact, prompting us to chase down Neige via email to pick his brain on the new record, the last record and their upcoming North American tour, which should be a sight to behold…

Blistering.com: Souvenirs… was obviously a major step forward for Alcest. If we rewind back to ‘06/’07 when you were composing the album, did you foresee any of the critical acclaim/recognition happening?

Neige: Of course not, I’ve taken so much time to compose this album, I really made it for my own satisfaction and didn’t imagine so many people would be touched by it. I am glad that Alcest has found an echo in other people sensibilities

Blistering.com: Do you find it difficult that going forward, there will always be a set of expectations on Alcest?

Neige: I can’t deny I was a bit afraid when I felt it was time to compose a new album. Souvenirs… got such praise from certain people that I feared not to be able to push away my own limits. First I didn’t know in which direction to go, I just knew that I didn’t want to compose a Souvenirs… copycat. Finally everything happened naturally and now I can say that Écailles De Lune is at least as good as the previous album, and most of my friends and people around me are even saying they prefer Écailles De Lune because of its deeper atmospheres and complexity. In my case, I like both of them, I just think they are pretty different.

Blistering.com: Describe the process of stepping away from Souvenirs d’un autre monde and then entering the writing process for Écailles De Lune.

Neige: I would say that Écailles De Lune is different from Souvenirs mainly because these albums don’t share the same concept. Souvenirs was a description of memories I had as a child about a luminous far away dimension, to summarize it is a musical testimony dealing with an esoteric experience of life in another plane of existence which has nothing to do with the world we know.Écailles De Lune could be seen as a metaphor of how I manage to live with this experience now in my everyday life. As I sometimes feel that nobody really understand and grab what I am speaking about, in some moments it’s like if I was a stranger here, and speaking for nothing. Alcest wouldn’t exist without this concept (and raison d’être) behind the music, this must not be forgotten.Musically, this album is more melancholic, darker, with intense darkblue soundscapes. It’s also more contrasted and progressive thanSouvenirs in my opinion.

Blistering.com: In comparison to your work with Amesoeurs, do you have to enter into a certain headspace to compose for Alcest?

Neige: I don’t have a specific way to compose, but I am from the ones that always try to find out some ideas, in a constant way. As for the headspace, yes I would say that I need to be in a certain state of mind to find good ideas, otherwise a lot of time can pass before I find something appropriated for Alcest. When I composed for Amesoeurs, I needed to be in a negative and depressed state of mind. As for Alcest this is a bit more complicated since the emotions I am looking for are more subtile that just feeling “sad” or so. You know for inspiration there is no rules and no tricks.

Blistering.com: The new album is more aggressive, a bit more black metal-tinged than Souvenirs. What is this a result of?

Neige: I don’t think that we can speak about aggression. Ok, I can understand that considering Alcest’s style this album is more aggressive than usual but in my opinion the feelings doesn’t change because of this. Écailles De Lune is almost even more otherworldly than Souvenirs…. I want my music to sound like if it was not played by humans, without any down to earth aspect, I don’t know if you see what I mean. For me to scream is not necessarily a reference to “black metal” or the expression of anger, I see it more like a non-human voice. The expression of what could be a second nature for me.

Blistering.com: Do you see Écailles De Lune as the “dark” to Souvenirs d’un autre monde’s “light?”

Neige: Écailles De Lune is darker than Souvenirs… for sure; these two albums are complementary in a way. The core of Alcest concept will always remain the same but I will deal with it through a different angle depending on the albums, through different spectres of emotions.

Blistering.com: Perhaps the most striking song on the album is “Sur L’Océan Couleur De Fer,” which is one of your most soft, yet emotionally-tinged songs to date. How did that song come about and what is it supposed to represent?

Neige: “Sur L’Océan Couleur De Fer” has a special story. Originally the album included the two Le Secret EP songs re-recorded, but finally I thought it didn’t fit with the new songs’ ambiance and style. I decided finally to release these older song separately, they must be listened in another state of mind, as they are very hypnotic and ethereal. So I composed “Sur L’Océan…” to replace them. It was a challenge because I had a very short time to do it, and it had to be without drums since the studio recording session was finished. Finally I think that this is one of the Écailles De Lune highlights, I am very proud of it !

Blistering.com: It took three years to follow-up Souvenirs. Will such a span take place after Écailles De Lune?

Neige: If I only knewn… I don’t know how much time this will take to follow-upÉcailles De Lune. I just can say you that I am proud of two firsts Alcest albums and I want to reach at least the same quality level for the next one, and I will take all the time that is necessary for it.

Blistering.com: You recently announced some US tour dates, which I must say, is a major surprise. You must be confident in how Alcest translates live, so who will be joining you for this tour in your band and what can expect from the setlist?

Neige: The persons that will accompany me on stage are Winterhalter on drums (Les Discrets, Amesoeurs, ex Peste Noire), Fursy Teyssier (Les Discrets, Amesoeurs), Zero (ZERO). They all are very good friends of mine. The setlist will be diversified, including songs from all the releases since Le Secret. We want Alcest shows to be a strong experience for the listeners, we will give our best for translate the most faithfully the Alcest emotions.

Blistering.com: What would the ideal setting for an Alcest live show be?

Neige: Ufff, I don’t know. If we could choose the setting we wanted, I guess this would be something like playing in a church or even in nature surroundings, a beautiful park during a summer evening. Well I am pretty satisfied with the present Alcest setting we have for the shows, which is very sober and cold.

Blistering.com: For you, what does North America represent? It’s an awfully tough market to break into, so what are you hoping to accomplish?

Neige: We don’t know exactly what to expect from this North American tour, we are just really happy and curious to do it. We will travel, discover new places, new behaviours, and play Alcest music every nights. For sure this will an enriching experience.

Blistering.com: None of your projects has broken away from using French as the primarily language. Do you find there’s a certain romantic edge to this? Also, do you fear this will prevent you from gaining mass acceptance?

Neige: I am using French because this is the easiest language to write with for me. To sing in my mother tongue is very intimate, stronger, the power of the words is multiplicated. French can have a very beautiful and interesting sounding, I don’t understand why so many French bands don’t want to use it.

Blistering.com: Finally, what’s in store for the band once you complete your North American tour dates?

Neige: A few concerts more and then to start the composition of the next album! I can’t wait for it.