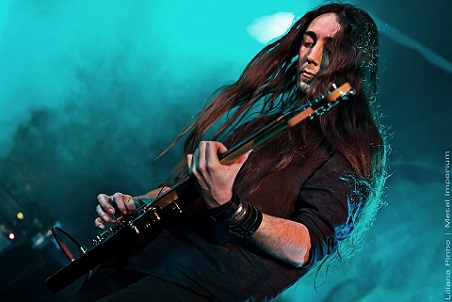 Dead Rhetoric: You think of a band like Sigur Ros and you immediately think of how layered their sound is. It sounds like you were going for something similar here.

Neige: Yeah! The new record in terms of songwriting and structures and melodies, it’s very simple. It’s extremely simple because I like the pure songwriting, so the way to push all of these notes together and it had to be good from the sound without all of the metal and guitar pedals. I often compose with an acoustic guitar, a very dry sound to get just the notes because that’s the essence of the song. You can record as many layers as you want, but if the song is not good, it’s not going to sound good. That’s the first step, and then in the studio, we recorded like 90 tracks of guitars and layered them. It was such dense layering on these songs. The guy in the studio was mixing and I was on the sofa listening, and he asked me: “Do you know how many guitar tracks you recorded on this song?” And I went, “No, just tell me.” And he went “More than 100.” [laughs] You don’t hear all of them, but it’s to make this ambient sound.

Dead Rhetoric: Neil’s guest vocals on “Away” can be considered a highlight, and you must be a Slowdive fan. So, how did you end up snagging him for the album?

Neige: Slowdive is my favorite band since I discovered them. It’s just my favorite band. For me, I like everything they have done since their demos. They have a lot of unreleased stuff, like a demo collection that was never released and that’s probably their best material. It’s very produced and recorded, but you can hear the potential of the songs and it’s too bad they never recorded it properly. I like everything from this band…they don’t know how to make a bad song. [laughs] It was a dream for me to have this guy on the record.

We tried to contact him for some time and he wasn’t responding back, and I was like, “Fuck, we’re never going to get this guy.” And finally, our agent contacted him through Facebook and finally after four or five months of hard trying, he replied. He was interested, and I was like, “Oh my God, that’s so great!” He came to Iceland for a few days and we hung out together and he recorded his vocal parts, which are just great. Since then, we are friends. Some people have their favorite musicians that are dead and are part of the vision, but he’s still alive. I’m so glad I could meet him…it’s great.

Dead Rhetoric: Since you started Alcest, you’ve kept to a broad, but focused storyline and dreams and your childhood. How does the concept of Shelter tie into that?

Neige: During your life, sometimes you grow up and you tend to have periods where you lose yourself and forget who you are, being a bit lost. For me, the Shelter are these things like a place, or a movie, music, or a person who reminds you of yourself. If you have a favorite since you are 18, everytime you are watching this movie, it reminds you of yourself and who you are. I think it’s important to be connected with our essence and for me, this shelter was the sea because I love to spend a lot of time by the sea when I lived in south of France. In the summertime, on a perfect day when it’s sunny and pleasant, just sitting in front of the sea watching the waves letting them clean my mind. I just find myself again in this place.

Dead Rhetoric: With you being so busy, do you find yourself losing a sense of who you are as a result?

Neige: Yeah. I live in Paris and I think I’m more of a country-side [person]. It’s not easy to keep connected with the essence of these things when you live in such a stressful, big, and modern city, but it’s important to find shelter and places where you can hide, and press “Stop” for a moment.

Dead Rhetoric: Do you live in Paris out of necessity?

Neige: When I moved there, it was five years ago and I wanted this change. I was living in the south of France feeling outside of everything…a bit lonely because all of my buddies moved away to do their stuff. I wanted to try the city life, so I tried it, and now I feel that maybe it’s time to find myself again. So maybe that’s I can relate very well to this concept behind Shelter.

Dead Rhetoric: As the band gets bigger, and you get more opportunities, you are becoming more visible. Is that something you’re comfortable with?

Dead Rhetoric: You don’t strike me as the type of guy willing to jump on magazine covers.

Neige: But you do it because it’s part of the job, and it’s good for the band. But, it’s true, especially on stage, I never feel good. When the show is doing really good, I can feel great, but it’s not happening a lot of time. [laughs]  When we are making a perfect show with good sound, good crowd, and good performance, it’s the best for me. When I get off the stage, I feel so strong and good. It’s very weird. Most of the time, I don’t feel really okay, so yeah, I just try to do my best and I’m not this “frontman” guy.

Dead Rhetoric: You’re getting better, though. When I saw you in Cleveland, you were moving around more on stage and interacting with the crowd.

Neige: Yeah! It’s also because we’ve toured so much and played so much, of course you get less anxious but it’s always here. I think it will never go away. There are people who are real frontman, and I have some friends that tell me they never feel as good when they are onstage. They tell me they feel at home when they’re onstage, but not me, especially since I’m singing, playing guitar, and am in the middle. [laughs]  I think that’s the only problem. I’ve done a lot of shows as a bass player and it’s perfectly fine, but I think it’s because I know people expect something from me, so I have to give something, and since I really want to give and people to be happy, I tend to be anxious. I just love to play for the people, but I want it to be good.