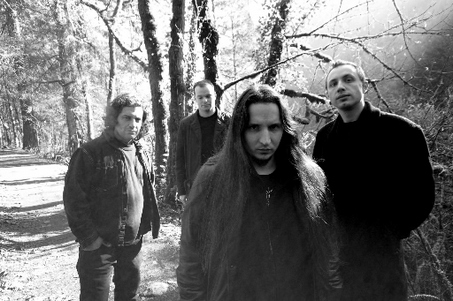 Perhaps the most “all-purpose” dark metal band going right now, Agalloch’s studio records are now a once-in-four-years occurrence, causing its ever-expanding fanbase to wonder what will come next, all the while recovering from the previous aural onslaught. Just like the band did after 2002’s monumental The Mantle with 2006’s challenging Ashes Against the Grain, they’ve done the same with this year’s Marrow of the Spirt. And by “that,” we mean change the scope of atmospheric metal the only way Agalloch can.

If there ever was an Agalloch record that required time and patience, it would be Marrow, but therein lies the allure behind the long-running Northwest-based troupe: easy, comfortable listening this is not. Rather the honest, homespun type of metal that they first ushered in nearly 15 years ago via the From Which This Oak is more apparent than ever. And because the band clings so tightly to the artistic motif they established from the early going, live appearances and Internet “whoremongering” are kept to a bare minimum. With that in mind, we caught up with bassist Jason William Walton (aka JWW) to get the scoop…

Blistering.com: There’s such a palpable sense of anticipation for a new Agalloch record, so how do you work knowing so many people are eager to hear what you have coming out?

J. William W: I think it is easy to get wrapped-up in the hype, in the anticipation and let it define or mold what you are creating. I think we do a good job of removing ourselves from that staying true to what we have always done, make music for ourselves.

Blistering.com: Since 2002 (specifically after The Mantle), the band has been held with strong regard by critics and the underground alike. How does that make you feel?

JWW: Praise from friends and those we respect hold the most weight, and we have been fortunate enough to garner accolades from many artists we admire. Usually a good review is nice, but we do not place too much value in it.

Blistering.com: Along those lines, your name is now frequently dropped and associated with any band remotely playing metal of the “dark” variety. Are you comfortable with that?

JWW: No. I am not comfortable with that. Usually comparing two bands is a desperate attempt to avoid trying to truly describe a band by aligning it with a “big name.” Agalloch does not need to be that big name.

Blistering.com: You operate in such a different space than most bands, meaning you don’t use the Internet as a frequent promotional tool, so it gives you this veil of secrecy. Are you afraid to adapt to this manner of promotion or do you just not care?

JWW: We are not scared or shy of the Internet, we have a Myspace account, a website, and a Facebook account, and most of us have personal Facebook accounts as well. It is not a case of being secretive, it is about being selective. There are only so many updates about the band that need to be made, and promotion can turn into bullshit hype really quickly. So, when we speak, we make sure it matters.

Blistering.com: Aside from The White EP, there were four years in between full-lengths. Has this become the standard allotted time for the band to put out a new album, or is it just how the chips fall?

JWW: It is more how the chips fall. We do not decide on four years per album, but that’s how it has worked with our albums thus far. We refuse to rush the process.

Blistering.com: The addition of Aesop Dekker seems to have had an instant impact on Marrow of the Spirit. What does he bring to the band?

JWW: Aesop is a great drummer, with a unique and identifiable style that understands us, and our music. Sometimes I feel that Aesop is the missing link we have been needing.

Blistering.com: Was the blastbeat/black metal section at the beginning of “Into the Painted Grey” designed to take people by surprise? It certainly wasn’t what I was expecting to hear…

JWW: I think we were all pleased that it worked out that way, but it wasn’t something we sat down and said to ourselves, “let’s make something to shock people.” It is merely how it worked out with that part.

Blistering.com: Upon the first few listens to the new album, it sounds more electric and aggressive than anything you’ve done. What was this the result of?

JWW: Maturation on our part as a studio band, a live band, and as individuals. Nothing more than that.

Blistering.com: You’re very selective with live dates. What criteria goes into when and where you play?

JWW: It has to be feasible with our personal schedules and be with bands and people we respect. We strive to make each show magical, and a unique experience for us and the audience. In order to achieve this, we can’t play every corner bar monthly. So, we are very selective.

Blistering.com: To that end, how high is the demand for Agalloch to do frequent live shows and/or tour? Do you have to turn down a lot of requests?

JWW: We turn down tours weekly. We do not enjoy this fact, but it is how it is for us. If we played every show and tour we were offered, people would be sick of us, and we would be sick of performing all the time.

Blistering.com: The band will be 15 years old next year. Will it be one of those moments for reflection?

JWW: To a degree yes. Our first European tour coincided with 10 years since the recording of the From Which Of This Oak demo, and that was undoubtedly cause for reflection and celebration.

Blistering.com: Obviously, Agalloch works under its own terms, but is there anything you’ve wished to have done differently up to this point?

JWW: I would have liked to have been more careful signing contracts.

Blistering.com: Finally, what’s on the agenda going into 2011?

JWW: Our West Coast tour, and a few other things are in the works.