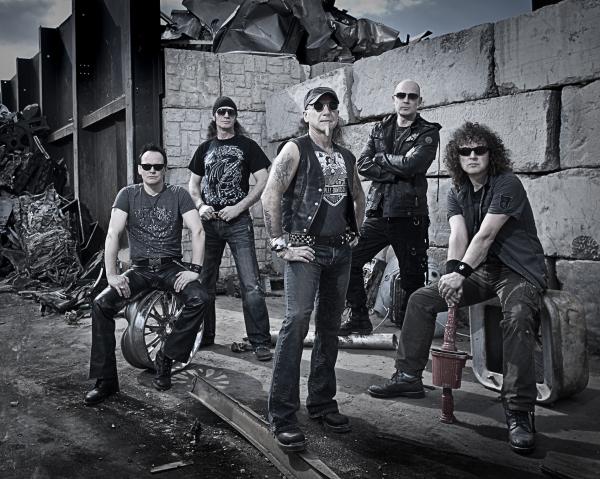 Sorry for the pun, but it took a lot of balls for Accept to reunite without legendary frontman U.D.O. Dirkschneider. Nine times out of ten, reunions like this fall flat on their face or better yet, replacing someone of U.D.O.’s ilk (i.e. Dickinson, Halford, etc.), usually result in fan backlash and subpar albums. Not for Accept. Their Blood of the Nations comeback has been warmly received and it should be – it’s the type of muscular, anthem-laden album that helped make the Germans a close second to the Scorpions in terms of Teutonic notoriety back in the Restless and Wild/Balls to the Wall glory days.

New singer Mark Tornillo (ex-TT Quick) was the shot in the arm the band needed to get back into the classic metal fray, and as evidenced by not only Blood of the Nations and the band’s recent live performances, Accept is going to be just fine. Guitarist and band leader Wolf Hoffman could only help but to agree with that sentiment, as he phoned us all charged up from a day of press…

Blistering.com: First off, how does it feel to back in the swing of things, doing press, shows, the whole bit? Must be exciting considering the time you were away…

Wolf Hoffman: How do you think it feels? It feels incredible! When you’re a musician, you’re always a musician. It comes right back and I’ve been missing it all of these years without knowing. There were a few years where I was perfectly happy being away from the music industry, not playing, but then, all of the sudden, you realize it when you go back out and meet the fans that it’s what you should be doing.

Blistering.com: Accept did manage to reunite a handful of times over the years with UDO, but when you weren’t doing the band, what did you do to occupy your time?

Hoffman: I became a photographer. I decided I didn’t want to my own solo project and people would ask me, “Why don’t you do your own band without U.D.O.?”My answer was always that it would have been so close to Accept, that it might as well have been Accept. I never wanted to do a band that would get compared to Accept. When we took this hiatus in ’96, I felt it was time to do something else and my second passion in life has always been photography, so I became a professional photographer in the States and have been doing it ever since.

Blistering.com: Every time you did a reunion with U.D.O., he would squash any talk of doing new material, so did you have any material around before doing Blood of the Nations?

Hoffman: No. We never thought it would happen. We never thought there would be anymore Accept recordings. There was never any thought of it and we tried to get together with U.D.O., but he turned us down, said he wasn’t interested in this anymore. Peter [Baltes, bass] and I happened to get together one day and do a jam session and that’s when stumbled upon Mark. When we met him, we thought, “Wow, this guy is perfect!” That’s when we decided to revive the band and get it all rolling again.

Blistering.com: What drew you to Mark’s voice? Not a lot of people are familiar with his work in TT Quick, but it’s obvious that he fits what you’re trying to do.

Hoffman: I hadn’t heard anything about him before [laughs]. I had never heard any material, nothing. He came in the door, someone said he was good and we invited him, without thinking much about anything. When we heard him jam with us, we heard him song “Fast As A Shark” and “Flash Rocking Man,” we thought it couldn’t get any better than this. Plus, he’s a good-looking guy, is the right age, all of this stuff. There wasn’t anything wrong. If he had been a 23 year-old kid from Seattle, I don’t know if that would have been such a good fit personality-wise, but everything was perfect. Here’s our chance to do something to go out and tour again.

He’s more easy-going than us. Sometimes we’re accused of being too-German in the sense that we have no sense of humor, we always work, we’re always on time [laughs]. I don’t know how much of that is really true and I don’t like at ourselves that way, but all of us, we have a great working relationship and we get along good.

Blistering.com: Getting Andy Sneap [Megadeth, Arch Enemy] onboard for the production was definitely a big win for the band. What was it like working with someone like him?

Hoffman: He’s one of the biggest Accept fans we’ve met. Just like parallel to Mark, he appeared all of the sudden because a friend

of ours had heard we were working on new stuff, and he wanted to be a part of it. Accept means a lot to him because he listened to us a lot as a teenager, so he heard we were doing something, so he was on board. One of the first things he did was made us sit down and listen to the old records again and point out things that to him, that were typical Accept like transitions or elements that he thought were special. That influenced us on how to write songs again that are like typical Accept.