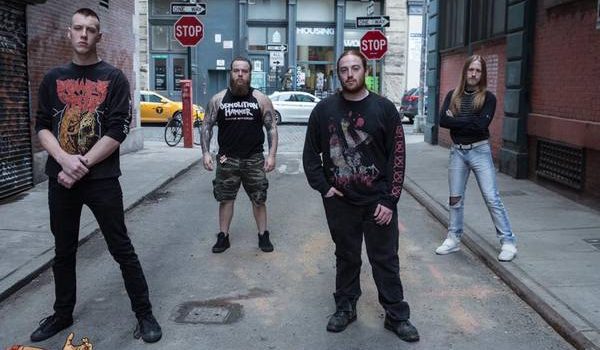 Based on social data and music tastes, bands can take advantage of such findings and target their products to the best potential audience. Case in point: discovering Long Island crossover death/thrash act Accelerator embedded in my regular Facebook news feed, advertising their latest full-length release Anthropophagy Outbreak. It only took a few seconds to go to their Bandcamp page, listen to the relentless ferocity of their music, and know that they have something special going on. Unafraid to dig into everything from D.R.I. to Demolition Hammer, Solstice to Municipal Waste, and even Morbid Saint – this quartet of musicians wish to bring the spirit of late 80’s/early 90’s thrash and death back, along with a modern bit of pissed off angst to elevate already crushing tunes to that next limb removal level.

Shortly after finishing a recent two-week East Coast run of dates to support the newest record, we fired off questions to the entire band: vocalist Joe Murray, guitarist Tim Como, bassist Scott Finn, and drummer Wes Mahalic. In this talk learn more about the early development of the band, growth through recording, what catches their attention about the 80’s crossover thrash/death scene, and what the future holds for this young, energetic set of musicians.

Dead Rhetoric: Accelerator started in 2014 by guitarist Tim Como and drummer Weston Mahalic meeting through an ad Wes posted. What did the ad state that attracted Tim’s attention – and how quickly were you able to recruit Scott Finn and Joe Murray for bass and vocals to complete the lineup?

Accelerator: Accelerator was technically formed in 2014. Tim and Wes met through a mutual friend in person, not an ad. An ad was posted to recruit a bassist and vocalist, many try outs were held, in which we found original bassist Rich Halloran and original front man Brian “Skidd” Marks in 2014. After a year we parted ways with Brian and by chance found Joe Murray to become the permanent front man, Joe had a much better look, sound attitude and drive that the band was looking for. After about six months we parted ways with Rich due to personal and musical differences. Scott was the guitarist for Absence of Salvation at the time, filled in a few shows for us while we searched for a permanent bassist then he wound up becoming the permanent bassist.

Dead Rhetoric: Did you know straight away that you wanted to pursue a style that had crossover death/thrash elements? And was it a process to come up with a band name like Accelerator, considering what’s already been taken in the metal realm?

Accelerator: We were originally just covering and jamming to bands we grew up loving and wrote a couple songs for fun. It wasn’t until Joe came in that we really started to get serious with the band and play more shows and steer in the direction of the sound we currently have. It actually took a long time to come up with the name Accelerator. Just to figure out something original, that was one word and that wasn’t already taken.

Dead Rhetoric: In the summer of 2015 you put out your first recording, the When the World Turns Black EP. How do you feel about the production, songwriting, and performances contained on this effort – did it establish Accelerator well in the local scene, and what would you change (if anything) about this product?

Wes: I felt it was really rushed, we didn’t have any music online yet so we wanted to get that done. We didn’t have much money to do it, so the production was good for what it was, we just wanted people to hear who we were.

Scott: I came in as it was finishing up, but it was very different because Long Island doesn’t have many thrash metal bands and it sounded different so I really liked it.

Tim: I personally liked it and thought it sounded good, I wish we just really developed our style more at the time we were recording it.

Joe: I personally liked it, I just wasn’t too fond of my vocals looking back on it because I didn’t really develop or find my style yet. It definitely established us in the local scene and we got A LOT more show offers after we put it out.

Dead Rhetoric: The latest album Anthropophagy Outbreak recently hit the streets. Where do you think you’ve improved as songwriters and performers in those two years – and can you tell us a bit more regarding this recording, as in how long it took for the sessions and what you concentrated on more to end up with an outstanding final product?

Scott: We developed our overall style more and took our time with it, we were much tighter as a band so that helped.

Wes: We were much more prepared this time for it and really excited to get into the studio to do it and knew exactly the sound we were going for and what we were gonna do.

Tim: We really concentrated on taking the songs more seriously in writing the riffs, drum parts, bass parts, solos and lyrics. We just had a (very) concentrated and serious attitude going into this.

Joe: We took three weeks in the studio, closer to a month actually. Whereas the EP if I remember correctly, only took us a week, or a week and a half. We really wanted people to hear us and know who we were and that we’re very serious and aren’t just some other local band.

Dead Rhetoric: Where does Accelerator come from lyrically – as it seems like you have many varied topics that develop on a social platform while others can be slightly humorous?

Accelerator: Well Wes and Tim had already written the first 4 songs (“Sexaholic”, “When the World Turns Black”, “Killing Machine” and “Insomniac”, formerly known as “Thrash Till Death”. Joe rewrote the lyrics for it). Joe really took all responsibility for the lyrics for every other song from there on with some help here and there from the rest of us if needed.

Joe: I just really wrote about whatever I felt when I heard the instrumentals. Because how we write is Tim will come in and jam on some riffs with Wes then Scott will put his bass parts in, then I’ll just take it home and come back with lyrics. Some are pretty dark, morbid and vulgar. It just mostly comes from built up rage or past experiences mixing it with some sort of fantasy. I just wrote however I’m feeling really and put it into a topic, it’s kinda hard to explain (laughs).

Dead Rhetoric: You recently completed a two-week tour up and down the East Coast. What takeaways or things stood out regarding these shows, and how do you feel Accelerator is received in the live market on Long Island or in New York/New Jersey in general?

Accelerator: We feel like we’re received fairly well for the most part, people know who we are throughout the area. Which is very humbling to hear whenever we meet someone new outside of New York and they’ve heard of us. As for the tour, we generally got really good turnouts at the venues we played at and the crowds were great and very nice to us. It was tons of fun and definitely an amazing time and a great learning experience in general.

Dead Rhetoric: Looking at your list of influences, it’s not often you hear names like Morbid Saint, Solstice, and Demolition Hammer thrown in against Lamb of God, Suicidal Tendencies, and Enforcer for instance. Do you believe this diversity from old to new establishes Accelerator with a fresh perspective on how you develop songs with intensity and dynamics, even when playing at relentless tempos?

Accelerator: Yes, we really love the old school 80’s thrash scene, but we feel after that, thrash became very generic and everyone started sounding the same. We just really wanted to be ourselves and play what we want with all of our influences and old school thrash sound still present in our songs to some degree. Most of the feedback we got from the crowds (while) on tour was that we sound like an 80’s thrash band but much darker and put our own modern spin on it. So that’s pretty cool to hear. We just wanna play what we wanna play really (laughs).

Dead Rhetoric: What’s your take on social media and the power of internet promotion/publicity as a younger, up and coming band trying to break through? Do you believe there are distinct advantages or disadvantages, and if so how do you navigate around and through them?

Accelerator: There’s as many pros as there are cons. Social media and iTunes, Spotify, etc. really help us get our music out there easier and it’s easier to tell people about shows and communicate to our fan base and get in touch with other bands, promoters, venues and people in general. No local band can survive this day and age without social media. Just because it’s MUCH different now than it was 30 years ago before the internet. As for cons the whole musical aspect is very diminished, it’s MUCH harder to make a living off of music sales and selling records. There’s really no physical presence to music as much anymore. It’s all through a computer now. Which was cool at first but now it’s sad.

Dead Rhetoric: What types of hobbies, passions, or interests do you like to pursue outside of music when you have the free time and energy to do so?

Scott: I like to run into burning buildings and drink

Wes: Drums take up most of my time, I’m always practicing in my free time.

Dead Rhetoric: What concerns you most about the world that we live in today? What do you think the average person should think about and consider doing to make things better for humanity?

Accelerator: People and we’re overpopulating and reproducing way too fast. As for what we think the average person should do, just be yourself and don’t make dumb decisions throughout your life.

Scott: Slaughter of the Soul (At the Gates), Spectrum of Death (Morbid Saint) and Advance and Vanquish (Three Inches of Blood). Seeing Tool tripping Sack-2017.

Dead Rhetoric: What types of goals does Accelerator set in the short term and long term? Would you like to gain record label support, or are you content to keep things more on a self-contained, DIY level?

Accelerator: Short Term: Getting better known in the tri-state area and beyond, and touring and writing more.

Long Term: Possibly signing to a label if we find the right one and get lucky. Other than that, doing what we do and have fun.

Dead Rhetoric: How do you see the next 12 months shaping up for Accelerator in terms of activities? Are there any plans for more touring, videos, etc. – and do the members have any side-projects / other band activities you’d like to share?

Accelerator: (There are) no other side projects, we wanna continue writing more songs, make a music video and plan another big tour. 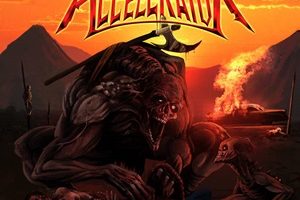