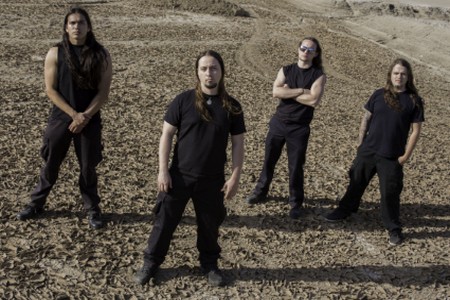 Dead Rhetoric: How do you tow the line in terms of blending melody/technicality/brutality?

Elliot: There’s no conscious effort. It’s just something that occurs naturally playing stuff you want to hear. Like I said, I like technicality but I really like hooks and I really like riffs. I don’t really like to hear a barrage of notes; I like having a riff that you can sink your teeth into. I don’t know if that is something that isn’t as prevalent in music today, but we just kind of blend what we like about metal or extreme music and try to make our own out of it. Music is just a culmination of your influences and that’s where your sound comes from. I guess melody has been infused in me; when I first started listening to extreme metal, melodic death metal was the big thing. I went back and discovered all the early ‘90s bands and then technical death metal became the big thing, there’s deathcore too but that’s not really my thing. There’s bands that do it well, and some bands that are good within that genre, but when it comes down to what my influences are, it was more in the beginnings of melodic death metal, thrash, and early tech death.

Dead Rhetoric: I saw a really cool article over at No Clean Singing a few weeks ago about the cover art. How important is every little detail when you are trying to design a piece of cover art?

Elliot: We spent a lot of time on that. If you read the article you can see all the step by step sketches. It was important. At some part, it was said I have a bit of perfectionist in me. Definitely with the attention to detail we took with it and the amount of back and forth and the length of time it took. It’s actually the longest we’ve ever spent making a cover. It started when we had no actual album title or lyrics or anything. Par [Olofsson] sent me the basic structure of that monolith and we kind of exchanged ideas back and forth. I think we make a good team, and that’s why we have used him on every album cover.

Dead Rhetoric: With the amount of detail and effort you put into the album cover, as we move towards an ever-increasing digital world, how much of a role does the cover actually play?

Elliot: I feel it makes people want to buy the actual physical product more. If you have cool packaging, people are more inclined [to buy it]. We are in a day and age where everyone can download your record and rip you off [laughs], it takes more to get them interested in buying the physical product. So it takes a little more effort on the band/record companies’ part to do that. The vinyl [for Obsolescence] turned out fantastic. I stared at that fucking thing when I first got it. I was immersed in that album cover. When we did it, it took so long that I think in the end, we didn’t know how cool it was. We had been looking at it for so god damn long. It didn’t come together as fast as some of the other covers did, where it kind of hits you a little more quickly I guess. In the end, it was the best reaction that we’ve gotten to an album cover, people lost their minds to it which is really cool. I think it’s our best album cover for sure, maybe my favorite cover that Par has done in general.

Dead Rhetoric: The song “Human Obsolescence,” there’s a wicked scream at the start and then also a well-placed grunt as the tempo changes. Do you feel there’s a key to placing a standalone grunt?

Elliot: [Laughs]I don’t know, I don’t think I’ve been asked that question before. I think it adds a little bit of drive to the song with adding a little grunt or scream. I guess it adds to the animalistic nature of the music. I think it gets people pumped.

Dead Rhetoric: Lyrically, you use a lot of personal experiences. Do you feel there is a line that gets drawn when projecting your own personal stuff into a death metal framework?

Elliot: I pretty much write whatever I feel about. I wouldn’t say there is anything off limits. Sometimes I wonder if I’m putting too much of myself out there, but then again, not everyone picks up on what I’m writing about. Or if they do, they get the context but they don’t know where it came from in my life. In the end, I want people to have their own meaning they pull out of the lyrics; it means more to people if they get that out of the lyrics rather than me dictating exactly what I meant. I had considered on this record, writing explanations to every song. But at the same time, I was more inclined to do that because I didn’t want to answer questions about my lyrics in every interview. Sometimes explanations are really long and things came from more than one place and it’s hard for me to explain where everything comes from because it is inspired from multiple places even in one song.

Dead Rhetoric: In 2014, what is the biggest challenge that a death metal band faces?

Elliot: Just differentiating yourself. I feel like we [Abysmal Dawn] differentiate ourselves now. This isn’t necessarily a horrible thing, but there’s all these technical death metal bands out there and we went the other way with this record. We still have technicality but there’s more of an emphasis on songwriting and riffs. Even the last few bands I’ve gotten into and in following death metal for the last few years, nothing really inspired me as much as some of the older stuff I guess. That’s just where it lead us I guess. I know we aren’t necessarily completely re-inventing the wheel; I feel like we have our own sound and I feel like what we are doing is refreshing. There aren’t a whole lot of new bands doing that anymore.

Dead Rhetoric: What’s next for Abysmal Dawn at this point?

Dead Rhetoric: There were so many albums that came out that day too!

Elliot: When our album came out there were so many killer death metal albums in the same day. There was a lot of competition and I’m glad that our record did well in its first week of release; better than we’ve ever done. That was a really good feeling.