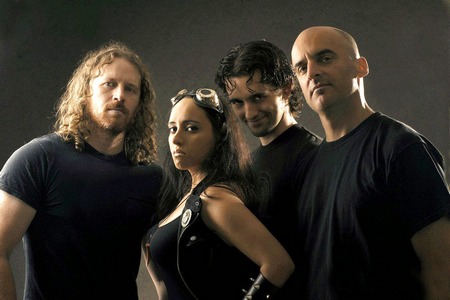 Dead Rhetoric: You’ve been able to get some great guest appearances from John Gallagher of Raven and Blaze Bayley on previous albums. Anyone on your bucket list to do a guest appearance down the line: either vocally or maybe in a solo spot?

Osegueda: Yes, Mark Tornillo from Accept, Fabio Lione from Rhapsody of Fire, Bruce Dickinson would be a dream.

Schwartz: We’ve also been in touch with Tony Carey, the keyboard player from Rainbow Rising and also had a fantastic solo career. He agreed to do something with us but we just haven’t been able to find the right spot for him yet. He may be doing one of the songs on a covers album that we have coming up.

Dead Rhetoric: You guys are very active within social media, willing to interact with your fans and put your thoughts out there on band forums, Facebook, etc. Where do you consider the pluses and minuses when it comes to social media?

Osegueda: The best aspect is you get to hear from all your fans, but you also get to hear from all the people that hate you (laughs). You have to take it with a grain of salt, you have to be willing to hear the good and handle the bad, you know. Some people either legitimately don’t like you or don’t like you personally, and you can’t take that personally- which is hard. It’s the Internet; people used to believe that it was only a place where nerds hung out, so everybody was nice to each other. Now it’s gone in the opposite direction, mostly people who like to be jerks.

Schwartz: We are all human beings and we all have our own political beliefs, and sometimes you can butt heads with fans who have differing political beliefs. On the other hand it’s a nice thing to have fans that we disagree with very deeply in our beliefs but we interact with them nicely and they will send us the nicest messages so that reminds us that even though we can disagree we are still people and we have things in common. I wouldn’t trade it in.

Dead Rhetoric: How do you feel in regards to acceptance within your own local scene?

Schwartz: I think the scene around here is more thrash and death, we’ve got some friends in Baltimore in a band called Ashes of Ares, we have some technical bands we are friends with like Iris Divine. Nobody in the DC/Northern Virginia area has clean vocals and a traditional metal background. I think it’s cool. It’s interesting because we are catching some flak right now because of the drop in music sales in general, a lot of the metal shows in general are moving from the bigger clubs to the really tiny bars, places that don’t have a full P.A., and what people call around here the do it yourself venues. Small places where you drag a small P.A. and get people together, drink beer and listen to metal bands. We have caught flak for wanting to stay in the clubs, but we feel it worked for 5 years to build the band up and we want a stage to run around a little bit and we want monitors so we can hear ourselves and it’s nice to have lights. We will see how it plays out. I don’t have a rosy outlook for the music industry in general, I have a feeling these thousand seater clubs are going to start going away. You will have your choice of huge artists at the amphitheater, paying $75 to go see them, and everybody else will be stuck at the little bars.

Dead Rhetoric: You said earlier that you are already working on album number five; can you give us any insight into this latest record, are there any special new dynamics to the sound of the band?

Schwartz: I think building on The Lesser Key of Solomon, it already seems like this new album that will be out early next year is a true concept album, one story that goes through the entire album without any gaps. There will be voice actors, recurring musical themes, still lots of layers, keyboards, guitar harmonies, some saxophones. It’s the next logical step, still darker, but less laid back. More intense than ever. You will definitely get the heavy on this one.

Dead Rhetoric: Do you think the critics have been fair on their assessments of your material?

Osegueda: I think they have been as fair as they can be. A lot of people, people have different tastes in music. Even if it’s not my thing, I can say that they are very good, they are talented at what they do, and I can’t complain about that. The type of songs we play, some aren’t going to love it no matter how we are. Recently with the new album, people have been loving it. Some people wanted more heavy and fast songs, me too sometimes, but at least you like it.

Schwartz: People will rate an album sometimes compared to what they were expecting, the sub-genrefication of metal kind of bugs me. I feel like people want to know exactly what an album is going to sound like before you play it. I don’t think that’s good for anybody; I don’t think it challenges the listener at all, it’s terrible for bands if you are on a label that hopes to sell a certain amount because you fit a certain sub-genre. If you are in a power metal band, (or) a pirate metal band on Nuclear Blast, in my mind you have no creative freedom. In our world we are free to put out a ballad, and I will be completely honest, I thought that we were going to be slammed in all these reviews for “The Boy Who Could Fly”. Especially putting it on the first half of the album. We were pleasantly surprised to find out that it’s been one of the favorites for most people on the record.

Dead Rhetoric: Are there parallels between people enjoying the comic book industry, superheroes, animation, and metal more so than ever?

Osegueda: I think I always have because being a big power metal fan, I’ve always seen a lot of nerdery in heavy metal. When I was growing up I didn’t listen to a lot of heavy metal, because I was sheltered. But the one album I did have was the soundtrack to Wayne’s World, but I had comic books, Star Wars, sci-fi novels. When I was older and able to buy my music, I saw Hammerfall – which is the name of a town in World of Warcraft. So I picked it up, and immediately the two clicked for me. That’s why I love metal so much, because I love the music and I’m able to connect with a lot of the themes so it’s the best of both worlds.

Schwartz: I should chime in for Chris here, because he sees the sci-fi aspect as one part of the band. It’s important to him that we have the more grounded stuff, for example on the last album “Power Play” was more political and about world events. It seems to make sense, if you were in one of those fantasy or sci-fi stories, wouldn’t metal be the soundtrack? It goes together naturally.

Dead Rhetoric: Where would you like to see A Sound of Thunder 3-5 years down the road?

Osegueda: Realistically, or if we got our three wishes from a genie? Josh you take this realistically, and I will take on the genie one.

Schwartz: Realistically, I would like to see us being able to play Europe, maybe Japan, Australia, some of the mid-level festivals which would require us to get our CD’s out in Europe and such, the costs are holding us back. It costs $10-$20 to ship a single CD or vinyl depending on the territory, so it’s harder for people in those countries to get our stuff. Slowly we are getting a foothold over there. Hopefully at that point we would be at the point where people were demanding us to play some of those festivals. For me personally, I love performing live but I want to leave behind a really good recording catalog. Hopefully in another 3-5 years that means another 3-5 albums and people can look back and say that A Sound Of Thunder put out a really good catalog of music.

Osegueda: Wish from the genie: touring with Iron Maiden, private plane with Bruce Dickinson flying, and Cher as a backup singer in one of the songs. I want a throne made of human skulls.

Schwartz: That last one may fall under the realistic category.