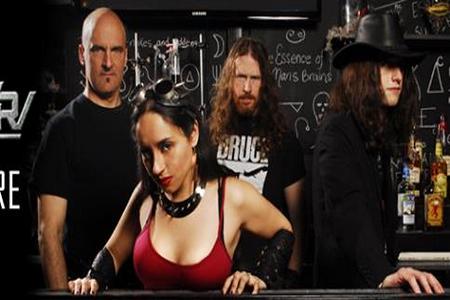 Dead Rhetoric: Mythology, fantasy, science-fiction, history are just some of the topics covered lyrically in your songs. Are you avid readers, and how much research/refinement occurs in the word department from conception to final outcome?

Osegueda: Josh and I are huge fans of comic books, but I think Jesse and I are the ones that read books the most.

Schwartz: They read the most science-fiction books, the lyrics are split between Nina and Chris, ¾ of them are Nina’s and Chris throws in ¼. Chris reads a lot of non-fiction material.

Dead Rhetoric: Crowdfunding can be a hot button topic in not only the music industry, but also the entertainment field in general. You’ve been able to use it successfully in regards to help fund your Queen of Hell EP, Time’s Arrow album and this latest release The Lesser Key of Solomon. What have you learned most about your fans through this, and has your viewpoint on crowdfunding changed through the years?

Schwartz: I’d say we’ve learned that our fans are just generally supportive of things like this, as long as we treat them well they are behind us 100%. The biggest hurdle we come across regarding crowdfunding is that we are asking for a hand out. I understand it, I get the deal now, but I forget that a lot of people don’t, there are many people who haven’t heard of or done a crowdfunding campaign and don’t understand when it’s done right you’re not getting a handout, you are getting something in return. We make sure that the prices on our Kickstarter campaigns are the same or better than if you order the album later because we really need our fans support to pay for the production of the album, and we need that support much more at the early stage because by the time the album is done and we are able to set up a regular pre-order, we have to have the album paid off. We love our fans, if we treat them well they treat us well.

Dead Rhetoric: You’ve run into roadblocks as an independent artist getting newsworthy items on certain ‘metal’ websites – and figure out a way to voice your opinion intelligently through social media. Discuss your frustrations – as I certainly feel that in many ways talent isn’t rewarded as much as popularity or being in the right clique to get things accomplished and doors open quicker?

Schwartz: We’ve definitely learned the music business is not only about talent. Nobody that’s in the business to make money cares if you have talent, they care if you can put people into their concert halls or sell records. That’s why a band like The Butcher Babies, which I frankly think are terrible, always get a news item on a bigger website than us. There’s also a small and shrinking market of record labels, bigger magazines, and websites that make their living off of this and they sense their time is ending. They are clutching at straws to keep their business from ending. The truth is bands don’t need the bigger outlets to reach their fans, through the Internet we can reach our fans directly. They are circling their wagons and giving total preference to those bands who have sold their souls to the record labels. We made $23,000 on our last Kickstarter which all went back into the band, our animated video for “Udoroth”, a big deluxe digi-pack album.

We can chose to prioritize making cool stuff for our fans, and not necessarily because it will be a money maker. Where would we be if we were on Nuclear Blast? They would have given us an $8,000-$10,000 loan, have to pay it back, not have enough to make the album anyway so the rest would have had to come out of our pockets, and we wouldn’t have anything left over to play with and make cool stuff. It’s too bad that we can’t get into those mass media outlets but at the same time I wouldn’t trade places with those bands because I think we are at a turning point in our industry and if you signed a 360 deal and you don’t own your music and merchandise rights, those bands are going to regret that in the near future.

Dead Rhetoric: I did want to ask about the latest animation video you did for “Udoroth.” How did you find the company that did this and how long of a process did it take?

Schwartz: We had the story from Nina’s lyrics and we brought it to Powerhouse Animation in April – they did some animatics for us, it took the whole summer of 3 months to storyboard and have it completed.

Dead Rhetoric: You obviously spend a lot of money on the production aspect of your studio recordings – often throwing in a lot of narrative elements, deeper background vocals, and nuances to make songs like “Time’s Arrow”, “I Will Not Break”, and the new album’s “Fortuneteller” multi-layered aural odysseys. Where does Kevin Gutierrez as a producer factor into the mix to benefit the final product?

Schwartz: Kevin is everything – he is like the proverbial fifth member of the band. Our working relationship is so good with him, having worked on four albums in a row now, three that are out and the fourth one we are just about to finish. Nina can speak to this to, hanging out with Kevin in the studio and working more and more, we are comfortable and friendly. On the first album we didn’t really know him, we came as prepared as we could, everything got recorded more quickly and down to business. We didn’t spend as much time experimenting. As we went on with Time’s Arrow, you can definitely hear the production aspect pick up a few notches, and on The Lesser Key of Solomon he picked it up a couple more notches. A lot of that was down to time, let’s see if we can put the background vocals there, let’s double this entire song with organs, and it’s fun. Extra guitar layers and keyboards is a growth. He knows how to mix it and make sure everything fits right, so we wouldn’t be able to do it without him.

Osegueda: Kevin is a perfectionist, which is fine with me. Sometimes it gets frustrating when you are in there for six hours singing something repeatedly because I have to do all these harmonies but I can’t complain with the results. I am not a fan of producers who don’t give me a lot of direction, like when they just look at me to do it again. Kevin will tell me why I’m doing it again, he’s very good at keeping me in the loop and I really appreciate that.

Part II of Matt Coe’s interview with A Sound of Thunder will post Thursday night, October 2.