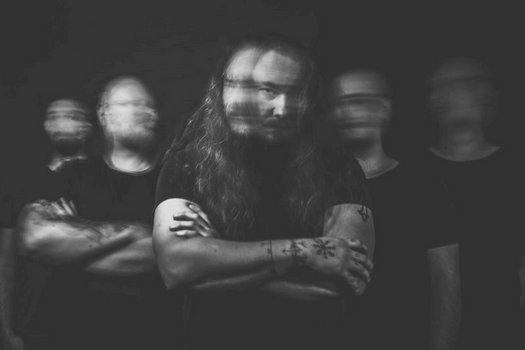 Seemingly popping right out of the woodwork and into the Napalm Records family is that of (0). With a previous EP under their belt, the mysterious act’s trippy and atmospheric approach to extreme metal is set to make a mark with their full length debut in SkamHan [Pre-order HERE]. The mood easily invites in the listener and takes them through feelings of sorrow, anger, and guilt and holds them in captivation. With such an intriguing release looming, we connected with vocalist FJ and guitarist MA to discuss the ins and outs of the record, anonymity, and some of their future goals.

Dead Rhetoric: Is there a certain way to say the band’s name?

FJ: Nah, it’s kind of a symbol. We don’t really use a name, but people tend to call us “parentheses-0-parentheses.” It’s really up to people to say.

Dead Rhetoric: Being that it is a symbol, what is that you like about it? Is there a connection to the music?

MA: It started during the recording of our EP. We didn’t have a band name, and we discussed why we should have a band name. We started to challenge the idea of doing things just because that’s the way that they have always been done. We kind of ended up with agreeing that if we don’t just come up with a band name, then maybe we shouldn’t have one. This symbol means ‘complete emptiness’ or something like that.

FJ: It is the absence of a name – the symbol itself. So it was kind of a good fit.

Dead Rhetoric: How does SkamHan compare to your EP?

FJ: It’s kind of along the same lines. Although the theme is a bit different this time, while still retaining the exploration into the melancholy.

MA: It’s the melancholy, and we explore all the darker sides of life.

FJ: The darker sides of living, like feelings of anger, guilt, envy, shame. Stuff like that. So we build on the mood from the EP, but the themes are a little bit different.

MA: It starts off with a basic idea. It could be a basic riff that we work on, and then we try to combine different parts. Sometimes, it’s almost a finished idea that just sounds like us. We work a lot with different parts and try to stitch them together.

FJ: And make them cohesive so that they work with each other. Most of the time, the songs are completed with a particular theme or feel to them. Then the lyrics come along afterwards. Sometimes the lyrics are there, and then we have to build on that.

Dead Rhetoric: How important is flow and atmosphere in each of the songs? Are they things that you emphasis in making sure parts are cohesive?

FJ: The thing we constantly say to ourselves is that it can’t feel forced in any way. That’s why you have these long atmospherics in some of the tracks and then some of them have a different flow. They are more on the brutal side, or whatever you’d like to call it.

MA: I think that what we have discovered, through the years, is that we have to be honest to the track. Even though we come up with a great riff that we want to play over and over again, it might not suit the track. Then we have to cut it down or maybe remove it altogether. We need to be true to the track we are working on. We are very focused on that. When creating music, or working on a track, sometimes the track starts to tell us which way to go. I think we have become pretty good at listening to what the track is telling us.

Dead Rhetoric: You mentioned melancholy as a theme. Is that something you were aiming to put in, or did it come about more while you were writing?

FJ: It comes about – there’s a lot of melancholy in life. No one goes about being happy or lovey-dovey all the time. It’s just a great feeling to explore, a great universe to explore. That specific region of the spectrum – there’ so much there.

MA: I agree. But it’s not like a decision that we made, that we wanted to make melancholic music. It’s always been there.

Dead Rhetoric: What can you say about the artwork of the album? Is there an interpretation to it, or is it something you are leaving more to the individual to decide?

Dead Rhetoric: How did the deal with Napalm come about?

FJ: It’s kind of like a showcase. There are labels there as well. To scope out new bands and that sort of thing. We had just finished our show, which was actually pretty good. We got one of the smaller stages, which suited us just fine. Right after the show, we were packing down our gear and the booker from Napalm Events said he wanted to talk to us.

Dead Rhetoric: How important is the anonymity component for the band?

MA: When we decided to have just a band name as a logo, we talked about how to detach ourselves from the music. We wanted to see how far we could go with detaching ourselves, to have the music stand alone. The logo, and no band name – but also not talking about ourselves, not doing a lot of interviews, and not posting on social media. That was also part of it.

Dead Rhetoric: I know there’s more to the band than just this one element, but what do you like about black metal itself?

FJ: For me, personally, most good black metal is basically dark poetry but with some very serious, very grimy music laid over it. It just harmonizes with me. It takes me to places where I like to go.

FJ: Again, that’s something that the press needs to have. There needs to be a label so that they can actually tell people what we are.

Dead Rhetoric: What goals do you have for (0)?

FJ: Play some good shows, make some awesome music. Basically the jist of it, and have a good time while we are doing it.

MA: You could say that we are in the process because cut this deal with Napalm and we have to get used to being on a label. We’ve been used to do things our own way, and now we have to somehow keep doing things our way, but at the same time, making sure we are doing things the way that the label wants us to. Things like interviews [laughs]. Our goal on the short-term is to get the album out and play some shows. Unfortunately, with the current situation as it is right now [COVID-19], it’s not possible for us to play any shows. And it might not be for some time. With the situation as it is throughout the world, the music and what we are doing is more insignificant compared to what is going on. So we also feel that there are more important things going on in the world right now. It’s a very bizarre situation to be in. We are releasing our first full-length album.

FJ: We aren’t very optimistic about being able to play a release show as planned.

MA: But at the same time, it does feel a little bit insignificant.

Dead Rhetoric: I wanted to circle back to what you were saying about being anonymous. When you play live, do you cover your faces or just go out and do your thing.

FJ: Go out and do our thing. The only thing we really do to obscure ourselves is that we dim the lights a little bit and we fill the room with smoke. That’s basically what we do. People were half-expecting us to come in masks and stuff, but nah. That’s not what we do.

MA: Anonymity was never really a goal. But when you don’t speak to the press and when you don’t say a lot on social media, you come out as anonymous and mysterious. So it’s a label that has been put on us. It wasn’t our intention to come out that way.

Dead Rhetoric: Do you have anything planned for the coming months?

MA: We do have things planned, but we expect them to be cancelled. We were to play a festival this summer, as well as a gig in Germany, but we are pretty sure that they will be cancelled. So we don’t have anything planned right now, and I don’t think there’s much going on since everyone is waiting to see what happens.

FJ: There’s a lockdown here so we can’t even meet up and rehearse.

MA: We have been locked down for weeks now.