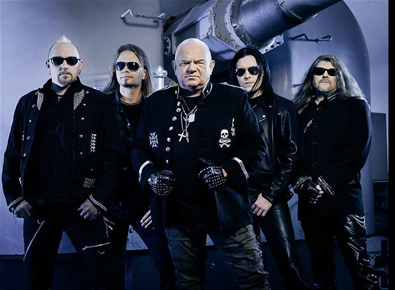 What lengths will people go to in order to see their musical heroes from youth? In my case, with U.D.O. hitting North American shores for the first time in 13 years, if he’s not performing close to your home territory, you make a road trip. Since there were no New England dates on the itinerary, my friend and I decided a Thursday night jaunt to Poughkeepsie, NY was in order. The Chance Theater is located off the Main Street area – a leisurely three hours away from our stomping grounds. Affording ourselves a little time to get some Mexican tacos at a nearby restaurant, we sauntered in just as the first opening act Psychoprism hit the stage.

My friend Eric remarked outside while we were waiting to get our wristbands about someone studying their arpeggio scales in a little sound check. Come to find out, it would be said guitarist for Psychoprism- ex-Operatika guitarist Bill Visser. His new band is more in the progressive metal mold – with a singer mirroring the classic Geoff Tate highs. The talent level is very high in the band; they are working on their debut album currently and you can see they are developing a decent buzz with the hometown legions.

Earthbound went on next. When the female vocalist tested the microphone and stated “Don’t worry about me in the monitors, I’ll be just fine…” that signaled something astray in my head. Her male bandmates (probably 20 years at least a piece her elders) play a kind of old-school classic metal that has its roots in early Judas Priest and Savatage – predictable, precise, and a plodding pace. No real stage presence and boring songs equal a lot of wandering around at the merchandise table- even as the crowd shouted playfully with their final song “I Declare War.”

After a short break while the stage curtain went down, Georgia progressive modern metal band Halcyon Way hit the stage. The matching black HW tops made me think of In Flames when they were set on their white stage attire era, and musically the band performed a mix of tracks from their three releases. Overall, vocalist Steve Braun didn’t know when to draw the melodies in, sometimes over reaching to extend words for a dramatic effect. “On Black Wings” and “Rise to Revise” were two of the tracks that met with minimal applause from a throng very ill-equipped on their material. It’s a tough situation when you are opening for a metal legend and only have 40 minutes to showcase your skills, but maybe this will season the band a little more as they finish up work on their next album, due out in late 2013.

Finally at 10:25 pm, the intro music rolls out… a little dry ice from the fog machine and the stage lights go red… as U.D.O. arrive on stage one by one, rolling out the title track to his last studio album Rev-Raptor. Udo at 61 unleashes his patented screech metal voice, as the backing band accent all the right melodies for the easy to ingest choruses. New guitarists Kasperi and Andrey give the front line a younger, more energetic presence, dazzling the crowd with all the right poses and hero maneuvers. The set moved briskly, with “Thunderball” and “They Want War” gaining appropriate bursts of fist pumping and shouting. Udo took time to mention the new album that will be hitting the streets soon called Steelhammer, premiering for the first time the single “Metal Machine” – meeting immediate approval for its slow, modern-like stomp.

Over the course of the next 80 minutes we were treated to 16 songs – 11 U.D.O. songs and five Accept classics, including the triple threat encore of “Metal Heart,” “Balls to the Wall,” and “Fast as a Shark” (complete with Udo leading the crowd in the infamous German nursery rhyme opening). Two short solo segments from Andrey and Kasperi gave Fitty, Francesco, and Udo a chance to have a little breather – and surprises included the Time Bomb title cut and “Burning Heat”, as well as “Break The Rules” from the Mean Machine album, as well as no tracks from the Holy record (the last time his band hit the North American market in 2000).

This is a brief tour to re-introduce the band to North America, especially with the re-issue of a good chunk of his back catalog. Overall, the mostly old school audience loved every minute of U.D.O. – which should ensure more frequent jaunts when they plan their touring schedule. Small club shows like this prove that the classic metal platform will always reach into future generations and also meet the approval of the 35+ crowd seeking to relive their youthful exuberance for the genre.