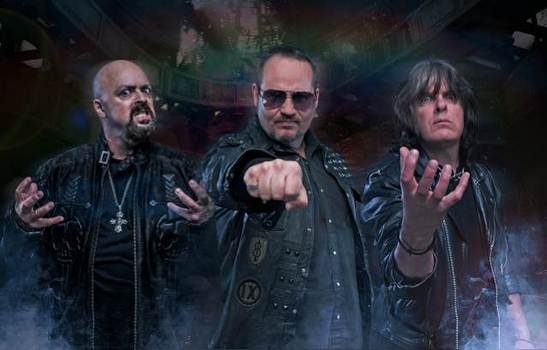 Speculation and anticipation abound in the metal landscape, especially when waiting in line to get into a show. Most of the patrons know one of the main three ‘singers’ of The Three Tremors – but at the time of this live show, the full-length self-titled album just hit the streets, and there were only a few lyric videos and one conceptual clip at most listeners disposal to preview what this group would be about. Would they do some Judas Priest material (Tim ‘Ripper’ Owens being one of the Tremors)? Would Cage songs factor into the mix (Sean Peck the second Tremor)? Or Jag Panzer songs for that matter (Harry Conklin the third Tremor)? As the audience filed in on this colder late winter Friday evening – with an impending storm on the way – you could just sense that this would be a night of power metal with traditional, speed, and thrash aspects all in focus. Choosing to employ a three-headed vocal presentation would put the Priest on steroids ability to the test – screams and falsetto, high-pitched vocal acrobatics the order of the evening.

While the scheduled door-time for 7 pm came and went, the venue actually opened at a reasonable 7:15 pm – the first of three local openers Wading Nine from the Hudson Valley coming to the stage at 7:30pm. A three-piece act that opened with a taped intro piece and possess additional stage lighting and fog machine action for maximum effect, the bassist Mike Miller also wore a gas mask throughout the set. Musically the band go for an alternative hard rock meets grunge sound, almost sitting in that line between 90’s Seattle scene (think Alice in Chains) and a bit of the modern side of Disturbed and Breaking Benjamin for their influences. They delivered a solid set of material that went over surprisingly well considering all the old-school minded people in the audience (loads of Priest, Dio, and Maiden shirts for sure).

Dyspell have been a mainstay for many solid bills at The Chance – understandable given their melodic power metal four-piece style with a crisp, double guitar attack courtesy of vocalist/guitarist Mario Conselo and Brandon Hawkes. “Ocean of Emptiness” was a standout of the four-song set – which may seem short but considering many of the band’s arrangements contain numerous instrumental intricacies and parts it’s understandable as the songs go for the six to eight-minute range. They too received kudos and plenty of admiration for their instrumental skills and progressive nature – melding together influences from the 80’s (Helstar, Iron Maiden, Savatage) and beyond (Blind Guardian, Symphony X, Nevermore). With a future EP in the making and hopefully released this year, the future is very bright for this Westchester act.

Last Pharaoh would be the final local support to open this evening – a power/progressive metal band with a neo-classical edge and tremendous sophistication and abilities especially on the vocal and guitar fronts. Too bad guitarist Ron Toth this evening was barely audible against the bass work of Michael Harris – you could often see his hands burning the frets of fury, but the sound remained in the distance. “The Headless Horseman”, “Jekyll and Hyde” and “Psychohouse” were standouts. A clear case of a professional band doing the best that they could, even as the soundman struggled to dial in the right mix for the group.

The Three Tremors consists of Cage musicians – guitarists David Garcia and Casey Trask, bassist Alex Pickard and drummer Sean Elg – beyond the already mentioned Peck, Owens, and Conklin. They would rivet the audience with their brand of power metal – over the top at times for sure, but also mindful of the proper emphasis on darkness, vampires, metal, and the heroes that are long gone but never forgotten. They would spend the bulk of their set introducing the audience to their new self-titled album – of which opener “Wrath of Asgard”, “The Pit Shows No Mercy”, “Sonic Suicide” and the title track closer definitely made a headbanging set to stun impression that caused numerous people to fly about, headbang, and certainly purchase said album before they left the venue. Sean Peck would make stage maneuvers as if hitting home runs to the crowd, Tim ‘Ripper’ Owens shaking hands and acknowledging people in the crowd for their Priest-attire, while Harry ‘The Tyrant’ Conklin would incite the crowd and capture the metal enthusiasm and celebratory nature of live metal in the flesh.

Each singer would also showcase their own previous work – “Burn in Hell” (Ripper), “Hell Destroyer” (Sean), and “Black” (Harry), while we would also get some Priest staples like “The Sentinel” and “Painkiller” – plus a song not yet done on tour, “Heaven and Hell” from the Dio-era of Black Sabbath. There was plenty of shredding, speedy double bass kicks, and glorious heavy metal that to some may be too ‘over the top’ – but isn’t that what the best heavy metal should be about? Not playing it safe, but swinging for the fences? In the end, the band delivered close to 90 minutes of heavy metal that the hundreds of participants took in and savor. And hopefully this will not be the last time we see The Three Tremors in our neck of the woods. 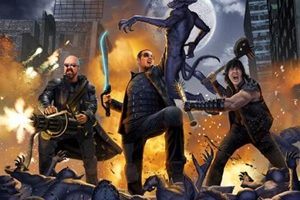