Soilwork’s 2013 North American tour – a grueling 65-date run – was in full speed when it hit Pittsburgh. This lovely city, of course, is the namesake of the band’s “The Pittsburgh Syndrome,” so there’s this sort of mutual affinity between the two parties. The Swedes have always done well here, and tonight was no exception, freezing temperatures be damned. (Where’s the warm weather? Seriously.)

California thrashers Hatchet were missed, only because Dead Rhetoric was holed up at a Starbucks, dealing with an awfully slow internet connection. Once a tall vanilla latte was consumed and greetings were exchanged with our own Dan Barkasi, Bonded by Blood (yet another retro thrash band) were onstage and instant quips regarding singer Mauro Gonzalez’s hairstyle were being made, probably because the singer’s blonde streak is oh-so-not thrash. But hey, the man can do what he wants with his hair. At least he has some. Thankfully, the soundman had BBB dialed in, and their passable brand of thrash got some people excited, specifically on “The Aftermath” and “Immortal Life.”

With little or no interest in bearing witness to Blackguard’s overrated and pretentious “epic metal,” we mingled with old friends and picked up a Soilwork shirt with an anchor on it. (Upon wearing the shirt days later, this scribe’s stepmother quipped that it looked like an Ed Hardy shirt. Blah.) Purchases aside, Jeff Loomis, in his shred-glory took to the stage, and was greatly warmly, and rightfully so. Working the stage practically all by himself (his sidemen were pretty stationary), Loomis reeled off one flashy, speed guitar run after the next, but after a few songs, it starts to ring hollow. Loomis should accompany himself with a vocalist, if for no reason other than to add variation to his songs. Plus, it’s still a smidge off-putting to see him up there without Warrel Dane flanking him to the left.

Reception to Soilwork’s new double-album The Living Infinite has been largely positive, giving the Swedes proper reason to air a good portion of the album in the live setting. And they did. “This Momentary Bliss” got things started, and while the soundman was apparently out for coffee (at Starbucks perhaps?), Soilwork’s wholly-excellent guitar tandem of David Anderson and Sylvain Coudret put on a dazzling display of melodic death metal riffing and spicy solos. “Like the Average Stalker” and “Possessing the Angels” offered proof of this, proving the Swedes haven’t forgotten about their back catalog.

It was the groove-laden “Figure Number Five,” quasi-balladry “Let this River Flow,” and sing-along “As We Speak” that did the trick for Soilwork tonight. It’s not a reach to consider them as more of an interesting proposition in the live arena than their contemporaries in Arch Enemy and In Flames. And plus, Speed Strid is such an imposing figure…who would want to venture a guess otherwise? 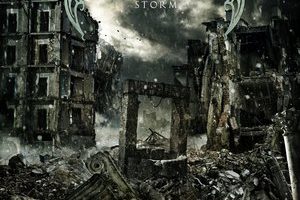