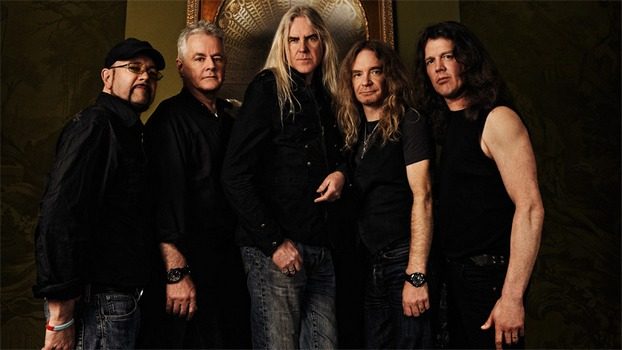 Call it the nostalgia factor – or call it just putting in the plain old-fashioned elbow grease – Saxon are riding high these days in terms of popularity. Their latest studio album Thunderbolt has hit the top 30 charts in the UK and been their best received album in quite some time stateside as well. Hooking up on the Judas Priest tour reminds the old guard they are still kicking – and hopefully puts them in the new- found exposure category to the young ones. Filling in a normal off-date with a headlining gig in Poughkeepsie, NY – they also got Black Star Riders to join the festivities, with two local bands rounding out the evening’s proceedings.

Doors would be held up for an extra 20 minutes – and then the early people waiting in line would have to go upstairs to the balcony until the tour manager and roadies cleared the room of sound logistics and equipment issues. That meant the spectators needed to warm up from the chilly March wind still crisp in the area as winter refuses to let go. By 7:45, the first band from upstate New York Uncivil Liberty hit the stage to provide a 25-minute set of alternative, modern-oriented rock & roll. Serviceable at best, unmemorable for the most part – outside of a final song “Stop Your Bitchin’” that included an extended ‘audience sing-a-long’ chorus moment that went on for far too long. Best leave those stage moments for when you are headlining your own gig, as they could have got another track in otherwise. Rev Switch from New York City on the other hand was an outstanding three-piece, very talented on all fronts musically including dual vocal harmonies between bassist Anthony Fragnito and drummer Steve Budgie Werner and proper attention to instantly catchy musical hooks and comfortable stage presence for maximum approval from the audience. Their originals had a bit of Bad Company meets Y&T and Skid Row mixture – while the closing mash up of “Frankenstein” by Edgar Winter and “Hocus Pocus” by Focus went down massively for the forty-somethings and over familiar with those classic instrumentals.

The history of Black Star Riders is simple – originally guitarist Scott Gorham recruited musicians to start playing out the legendary Thin Lizzy catalog he was a part of. Morphing into an original act, they’ve made three albums to date and now boast a lineup that includes members who’ve been a part of Brother Cane, Ratt, and The Almighty among others. Tonight, they would play a healthy selection of songs that feature a twin (or often triple guitar) harmony attack, the cultural/Irish themes and textures front and center. Vocalist Ricky Warwick (making sure the crowd knew he’s 100% Irish with St. Patrick’s Day starting at midnight) can pull off that soulful, Phil Lynott-style delivery very well, as “All Hell Breaks Loose” and “Heavy Fire” received respectful response. He would pull out an acoustic guitar for the tender “Soldierstown”, and the audience rose to their feet and sang along to the two Thin Lizzy cuts aired, “The Boys Are Back in Town” and “Jailbreak”. Closing with “Bound For Glory”, it’s obvious that this band has the tools, skills, and songwriting ethics to win over most audiences that yearn for the 70’s/80’s twin guitar, melodic hard rock sound.

Saxon has been a band since the 1970’s – and still kicking today with strong studio albums that keep up with the times in terms of heaviness and modern production techniques. They would choose to showcase a majority of Thunderbolt in this set – as the title cut, “Nosferatu (The Vampires Waltz)”, “Sniper”, and their ode to Motörhead “They Played Rock and Roll” were four of the seven new songs that went down quite well to the packed patrons of The Chance who filled the downstairs and balcony areas. From there, it’s a balancing act between the tried and true classics and the title tracks that most fans have come to know and love. This go around, that meant “Battering Ram” and “The Power and The Glory”, “Crusader” to “Strong Arm of the Law” – plus “Never Surrender”, “Dallas 1PM”, and “Heavy Metal Thunder” to flesh out a 21-song set that lasted almost two hours.

The quintet will never be accused of being the flashiest in terms of stage presence (although bassist Nibbs Carter enjoys throwing his hair around and doing behind the back action), but damn do they know how to just rock the house with song after song that go down a storm. The band seemed genuinely impressed by the healthy turnout (eyeball figures would have it between 500-600) – which included many pre-teens and teenagers who were taking the band in for the first time. By the time “Denim and Leather” closed out the evening, you can rest assured that Saxon will not be forgotten on these shores ever again.