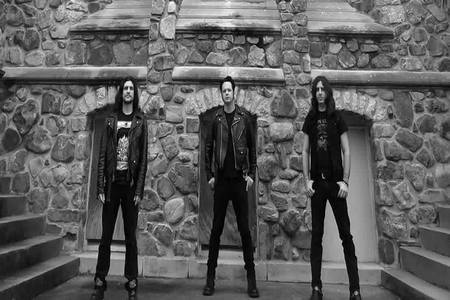 Ventura, California power trio Night Demon have taken the metal underground by storm ever since bursting onto the scene with their eponymous EP in 2012. The band has crisscrossed North America with the likes of Raven and Skull Fist, in addition to their own headlining stints, and has made the rounds overseas, playing such festivals as Keep It True and Bang Your Head, where they’re slated to perform this summer before returning stateside as openers for Ghoul, Crowbar, and Carcass on the One Foot in the Grave tour.

Although the band is hard at work on the follow-up to Curse of the Damned, their full-length debut, they have embarked on one final touring cycle behind Curse, which they’re playing in its entirety. Joining Night Demon for this current trek, which stopped at Firehouse 13 in Providence, R.I. on April 27, are Salt Lake City warriors Visigoth and Detroit speed rockers Against the Grain. Boston thrashers Black Mass were added as openers to round out this old school power-packed package.

Although there was a decent crowd by evening’s end, the numbers were slow to trickle in, but that didn’t stop Black Mass from delivering a high-speed, gritty set of raw thrash metal, in the vein of early Slayer, with some Death and Venom thrown in for good measure. Lead guitar/vocalist Brendan O’Hare’s raspy growl fit well with the crunchy buzz-saw riffing, which was bolstered by Christian Azevedo’s rumbling bass and Alex Fewell’s pummeling frenzy behind the kit. The brief but intense set was a great way to get the blood flowing and the heads banging.

One listen to Visigoth’s mystical tales of epic battles, hardened warriors and mythological creatures, and you know exactly where the band is coming from. While the band isn’t afraid to wear its NWOBHM and traditional metal influences on its studded, patched sleeve, a tired retread of past glories they are not. Visigoth inject powerful rhythms, thanks to bassist Matt Brotherton and drummer Mikey T., and soaring melodies, courtesy of guitar tandem Leeland Campana (lead) and Jamison Palmer, into their old school sound, keeping it fresh and vibrant while maintaining that familiar denim and leather flavor that has withstood the test of time. Resembling Rob Halford in appearance, vocalist Jake Rogers eschews the falsetto shrieks of the Metal God, but his rich, melodic register is perfectly suited to lead the charge of the band’s sword and sorcery attack. Opening with “Dungeon Master,” Visigoth used every bit of their 30-minute set to deliver an impressive, impactful performance that took no prisoners, and even included a cover of Demon’s “The Spell” for the NWOBHM diehards.

I had never heard of Against the Grain before this tour announcement, but the “Motor City speed rockers” won me over with their blues-based brand of dirty, sludgy rock ‘n’ roll played at a high tempo and with attitude. And judging by the heads banging and fists pumping around me, I wasn’t the only one. Guitarists Nick Bellomo and Kyle Davis kept things lively with chunky riffs and tasteful leads, while the rhythm section of drummer Rob Nowak and bassist/vocalist Chris Nowak kept things anchored. The thick chords and up-tempo rhythms of the Graveyard-on-speed rock ‘n’ roll churned out by Against the Grain was an effective audience igniter for Night Demon.

This was my fourth time seeing the Demon and the band continues to get better with each successive performance, as they are continually honing their craft and sharpening their live attack. The band understands that simply standing on stage and playing your instruments isn’t enough. The accompanying light show only serves to add depth to the addictive energy coursing through the band members and their playing. The room becomes smaller when Night Demon takes the stage, as the crowd packs in and moves up right to the front to share in the mayhem, creating a whirlwind of hair, sweat, adrenaline, and beer.

Newest addition Armand John Anthony, who has replaced original guitarist Brent Woodward, fit right in alongside bassist/vocalist Jarvis Leatherby, who was as energetic as ever bouncing all over the stage, and drummer Dusty Squires, who pounded the hell out of his kit, especially during “Curse of the Damned,” which opens up with a hammering drum beat before launching into a catchy “The Zoo”-like riff ala Scorpions. Not only was Armand darting across the stage and posing for twin lead solo action with Jarvis, but he also provided backing vocals.

In addition to playing Curse of the Damned in its entirety, in reverse order, which includes barnburners such as “Screams in the Night,” “Heavy Metal Heat” and “Full Speed Ahead” alongside darker numbers such as “Satan” and “The Howling Man,” the band also played all four songs from its debut EP, opening with “The Ritual” and “Ancient Evil” and closing a crackling set of NWOBHM-inspired, balls-to-the-wall, hook-laden, traditional metal with fan-favorite “The Chalice,” featuring the hooded, skeleton-faced band mascot Rocky roaming the stage, chalice in hand, and “Night Demon.”

If Night Demon’s latest performance is any indication, the band is ready to take things to the next level and expand its ever-growing legion of fans. Not only will the Carcass tour provide further exposure through larger audiences, but also more diverse ones. As the band prepares to unleash its next salvo, the timing couldn’t be any better for those not already in the know to discover the Demon and drink from the chalice. 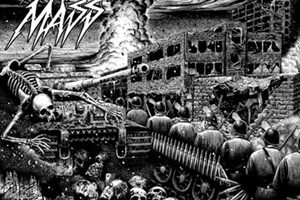