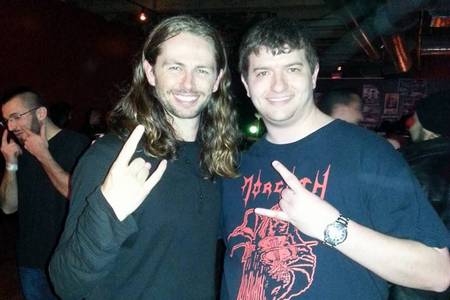 Sometimes the metal gods just smile down upon you. Originally scheduled to play the Boston House of Blues as support on the North American Cradle of Filth tour along with Butcher Babies on January 27, Melbourne, Australia progressive extreme melodic metal outfit Ne Obliviscaris found themselves in a predicament when the first four dates of that tour had to be cancelled at the last minute due to visa issues with Cradle of Filth.

However, Ne Obliviscaris had already landed in the U.S. and were ready to play, so they began looking to arrange dates and times for headlining gigs, which brought them to Firehouse 13 in Providence, R.I. on the same night they were supposed to be in Boston. With nearly two days lead time to promote the show and find two local openers to round out the lineup, there was a question as to how many would come out on a Wednesday night, but that question was soon answered as word spread like wildfire and scores of fans from all over New England descended on Providence for this special occasion.

Massachusetts’ sextet HADEAN kicked things off, featuring everything from experimental and progressive rock to post-metal in their eclectic sound. One minute the band is thrashing the audience with a metallic, percussive monster in “Noise Reduction Impulse,” featuring the harsh screamed vocals of Zak Bowditch amidst a mashing of cacophonous noise (for lack of a better term) not unlike Between the Buried and Me, and the next you’re being whisked away into a trance-like state by the somber playing of alto saxophonist Andrew Sullivan, as keyboardist Dan Howard weaves in delicate melodies, for the intro to “Inertia” (think Ihsahn’s “Undercurrent”). The 9:30 epic was a definite highlight, jumping back and forth between the ambient sax notes and more aggressive riffing and banging from David Parnell (guitar), Billy Mullen (bass), and Brian Fox (drums). HADEAN were a perfect opener for this show and energized the audience right from the start.

Next up was Chronovore from Newport, R.I. The band’s crushing death metal to the bone sound gets bodies thrashing and heads banging, but the band wisely works in breathing room passages that allow guitarist Erik Smith and bassist Alex Scofield to showcase their chops, injecting some progressive flair into the melodic death metal madness. As the band did when they opened for CAGE in November, they played several original songs and two covers, but instead of Mastadon and Iron Maiden, this time it was At The Gates (“Slaughter of the Soul”) and Death (“Crystal Logic”), which closed their set. Whether jumping off stage to mosh it up with the crowd or tossing out some cold ones to attendees, vocalist Bill Barbrie and the band possess an energetic stage presence that translates well to the live setting.

A little past 9:30 p.m., Ne Obliviscaris took the stage and delivered a 90-minute headlining set that was split evenly between Citadel and Portal of I. The band’s penchant for melding devastatingly heavy riffs and pulse-pounding rhythms with mind-bending solos and heart-rending melodies is unmatched. To experience a Ne Obliviscaris show is to truly be moved, both physically and emotionally. From the minute NeO blasted into “Devour Me, Colossus (Part I): Blackholes,” the throngs that packed the Firehouse bashed and flailed with reckless abandon, just as the band did. It was apparent from the wide smiles on stage that the band was enjoying itself just as much as the audience, who had waited years for this moment. “Of Petrichor Weaves Black Noise” followed, sending the crowd into even more of a frenzy, as heads continued to bang in unison with the band and fists and horns were held high.

Not only does the band balance brutality and emotion instrumentally, but vocally as well. Xen’s harsh growl provides attitude and energy, while the clean backing vocals of Tim Charles lend color and texture, as does his violin playing, to the concussive riffing of guitarists Ben Baret and Matt Klavins, the intricate bass lines from Cygnus, and the octopus-like double-bass barrage from drummer Dan Presland.

The emotional high point of the evening came about halfway through the set when Charles stepped to the microphone and said the next song is an old song, going back to the band’s 2007 demo [The Aurora Veil] and it’s special for the band. The utterly beautiful “Forget Not” followed, which really showcases Charles’ sweeping clean vocals and passionate violin playing. “And Plague Flowers the Kaleidoscope” was the only way to properly end a show of this magnitude, which the band did, eliciting endless chants of “NeO! NeO! NeO!” from the crowd before finally leaving the stage.

What began as a disaster with the cancellation of tour dates ended up resulting in one of the most incredible live performances and unforgettable nights for both the band and the fans. To see that many people come together at the last minute to pull it off just goes to show how tight-knit the metal community is and how lucky we all are to be a part of it.