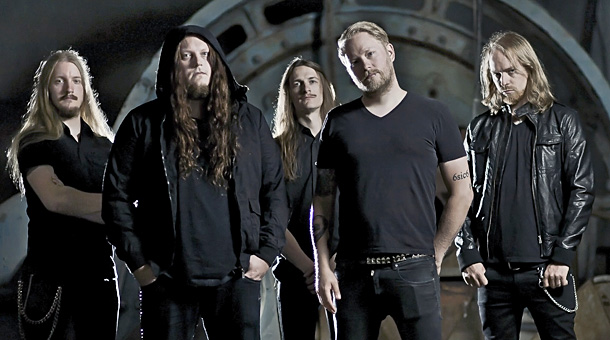 The fourth consecutive year Katatonia has ventured over to North America, 2013 doesn’t see a new release from the Swedes, but a three-headed monster in the form of a live release (Last Fair Deal Gone Night), a reinterpretation of last year’s Dead End Kings (Dethroned and Uncrowned) and the forthcoming reissue and sonic update of 2003’s untouchable Viva Emptiness. Each offer something different from the norm, which dovetails into their approach for this run: A slew of b-sides and previously unaired tracks were the focus of the setlist. Diehards rejoice.

Paired with post-metal stalwarts Cult of Luna, as well as the blossoming Intronaut and djent-minded Tesseract from the U.K., the tour rolled into the cavernous Mr. Smalls with a bill of obvious variety. DR was preoccupied talking to Katatonia guitarist Anders Nystrom, so Intronaut were missed. However, comrade Dan “Dumphrey” Barkasi gave reassurance the band proved their mettle in the 30 minutes they were afforded. On their fifth singer in ten years, Tesseract were greeted warmly, with the soft, melodically-tinged staccato metal doing its best to fill up the room. New vocalist Ashe O’Hara seems to be the right fit, with cuts from their new Altered State, as well as One displaying a more ethereal take on djent, which as we head toward the tail-end of 2013, should give the Brits some much-needed staying power.

Their first appearance on North American soil since 2006, Cult of Luna have captured the curiosity of many thanks to their expansion on the famed Neuro/Isis template. They’ve become more experimental, less metallic as the years have passed, with their fresh Vertikal I and II perhaps wrestling a bit too much with electronics and esoteric ideas. Nevertheless, the band in the live setting is simply punishing from an audio perspective. Cranked at full volume, the band’s three guitar attack detonated via the crush of “The One,” as well as the sweeping “Finland.” In spite of mainman Johannes Persson’s indecipherable bark, the climatic and monolithic quality of Cult of Luna in the live setting is undeniable.

During our chat, Nystrom spoke of some of the technical problems Katatonia experienced on the first few dates of the tour, which makes sense: They weren’t backlining with Cult of Luna, a common practice for headlining bands. Therefore, with the road crew having to get the gear set up on the fly, Katatonia’s sound didn’t formulate until the third song of the set, “In the White.” The comfort in which the band operates in the live setting is now obvious, as singer Jonas Renkse is only partially stationary, a step up from the days when he wouldn’t venture from the microphone. None of this really matters when absolutely miserable numbers like “Quiet World” and set closer “Unfurl” get the proper live treatment.  The band doesn’t have to budget for these songs to work their magic.

Sandwiched between Katatonia’s brilliant b-sides were recent cuts like “Leech,” the reflective “Undo You,” and “Ambitions,” which is another one of those slow-builders where Renkse takes charge and the guitars fall to the back. Even as the rousing “Forsaker,” and pulsating “Soil’s Song” got the crowd in motion, it was 2006 b-side “Dissolving Bonds” that emerged as the highlight of the evening. Makes sense, for it’s the band’s best song. And for a band that is presently all about taking risks, a song like “Dissolving Bonds” goes to show that if there’s a deeper, more vaunted back catalog in the dark metal realm, then please, someone try to supplant Katatonia.