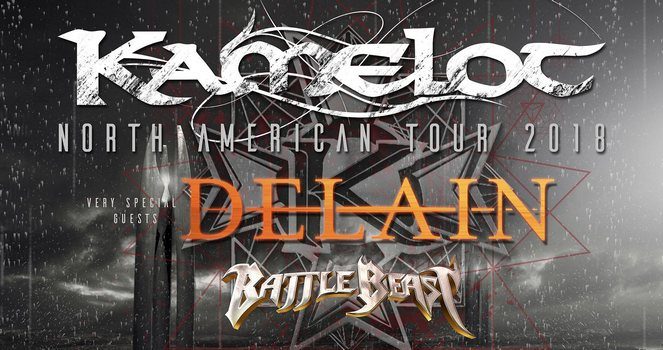 With the initial announcement for this tour coming out around a year ago at this time, there’s been plenty of time to anticipate one of the spring’s biggest tours for melodic metal fans. Three bands that are all pushing to conquer the North American landscape and have rising/established profiles within the scene, with no opening local acts, meant that this was to be a night packed full of symphonic and power metal glory. Having caught the three bands the weekend before as part of the New England Hardcore and Metal Festival, it was already clear that the high level of hype was certain to be met.

With a fairly early and efficient start (’twas a weeknight after all), Battle Beast was first to hit the stage and prime the crowd, still seemingly hot off of last year’s Sabaton run. Quickly firing off three cuts from their most recent effort, Bringer of Pain (“Straight to the Heart, the title track, and “Familiar Hell”), there was a very clear energy from the stage that the audience devoured. Battle Beast’s sound is seemingly focused on the live performance, and everyone is involved in engaging with the crowd, from guitar (and keyboard) heroics to Noora Louhimo’s constant interactions, it’s a fun and smile-inducing experience. While the only non-Bringer of Pain cut was “Black Ninja,” it’s hard to argue when said release was so consistently entertaining – even more mid-tempo cuts like “Lost in Wars” providing plenty for folks to revel in. It’s very clear the US is ready for a larger dose of Battle Beast.

With the crowd already fired up, Delain began their short but sweet 10-song set. Even with bassist Otto Schimmelpenninck sitting out this round and having a temp drummer in Joey de Boer (of Purest of Pain, which also contains guitarist Merel Bechtold), it was obvious the band has lost none of their chemistry. Which is, of course, their main appeal – there’s not many bands that have the level of interaction and clear enjoyment of each other’s company as Delain does. From their smiles and antics on stage, the feelings are infectious to the audience (who at one point were screaming/barking/meowing so loudly that it caused vocalist Charlotte Wessels to stop and jokingly tell them to get it all out of their systems before she proceeded). Like Battle Beast before them, the focus was on their most recent (and excellent) Moonbathers release, though they dipped back into their catalogue a little for a trio of We Are the Others cuts and “Don’t Let Go.” A fun and very crowd-approved set (as noted above) that is bound to make fans hope that the band will be back over here very soon with true headliner status (at least as soon as their next release is completed).

Then of course came the headliners in Kamelot, arriving nicely on stage right around 9PM (again, quite solid for a weeknight). Supporting their recently released The Shadow Theory, of which they played three tracks, there was a clear emphasis given to the last three albums, which makes sense given that was when current vocalist Tommy Karevik’s time began. Opening number “Phantom Divine” also marked the first appearance of vocalist Lauren Hart (of Once Human), who is providing the female vocals for this live round (as she did perform them on The Shadow Theory) and brings her own energy and persona to the band as well. The feeling of Kamelot’s veteran status does infiltrate their live presence – the vibe of a well-oiled machine is evident from the onset, with Karevik leading with plenty of charisma, and the rest of the band following suit (including guest drummer Alex Landenburg, who was also given his time to shine later in the set).

It was not without spectacle either, with “Sacrimony” bringing Hart and Charlotte Wessels to the stage to sing alongside Karevik, who grabbed the spotlight earlier in the evening with and Haven cut “Here’s to the Fall,” which brought a moment of serenity within more heavy territory. Mixing in some Khan-era cuts like “March of Mephisto,” “Rule the World,” and “Forever” worked to balance the setlist, as the 14-song set seemed to be over far too quickly – a testament to the band’s performance and energy.

As a final note, it should be commended that this three band billing was satisfying without being overly tiring. With the emphasis on “mini-festivals” of 6-7 bands on a billing, this strong force of three bands (with opening acts that had slightly longer than usual sets) left the audience thrilled with great performances – quality over quantity – instead of simply attempting to pile on bands and exhaust the crowd before the headliner, was much appreciated.