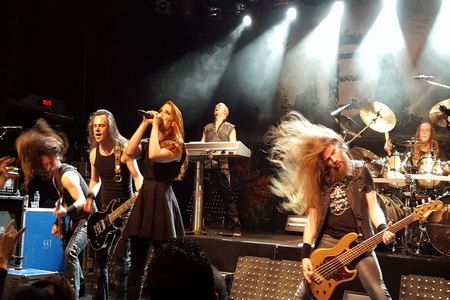 After some just plain bad luck between cancelled tours and family emergencies, Epica planned this early 2016 jaunt as a “make up” from their cancelled dates with Eluveitie and The Agonist last fall. This time taking Moonspell and Starkill along for the ride, NYC’s Irving Plaza stood as the opening date for the festivities. My first time at this particular NYC venue, Irving Plaza gave a solid first impression with a nice sized ballroom (complete with disco ball in the middle) and no gripes in regard to sound being some of the perks.

With no local openers and a rapidly filling audience (unfortunately it didn’t quite reach a sell-out though it was close), first up was Chicago’s Starkill. The melodic metal act has been sharpening their live edge since this writer took them in with Arch Enemy back in 2014 and provided a fantastic start to the evening. The impressive shredding duo of Parker Jameson and Tony Keathley still are the highlight of the act, and songs such as “Virus of the Mind,” “Be Dead or Die,” and “Before Hope Fades” provided plenty of evidence of the band’s abilities. The true highlight of the evening had to be their new track, “Cloudless.” There was a certain energy about the song, including some notable synths and standout melodies, showing how the band is continuing to move forward and redefine the Starkill sound. If its any indicator of what’s to come with album number three, it’s going to be a huge album (which you can help pre-order/fund at the moment HERE).

Portugal’s Moonspell took to the stage next and immediately enchanted the crowd. The band’s unique (and notably heavy) take on gothic-tinged metal was led by vocalist Fernando Ribeiro, who seemed to instantly command the stage the second he walked onto it. There was a definite charisma factor as the band laid into songs like “Breathe (Until We Are No More),” “Extinct,” and “Night Eternal.” The band dipped into their vast back catalog as well, with cuts like “Alma Mater” and “Full Moon Madness” going back to the band’s early days (and were quite enthusiastically received by the crowd).

Alas, it was finally Epica‘s time, who stormed the stage with two quick cuts from their latest album, The Quantum Enigma (“The Second Stone” and “The Essence of Silence”). Not having witnessed the band in the live setting before, their energy and charisma were infectious. It was easy to tell the band was quite happy to have made it across the ocean to get to these shows by the way they frequently interacted with the audience and each other. Vocalist Simone Simons sounded phenomenal, and her ability to hit those vocal parts so seemingly effortlessly was nothing short of impressive. As set progressed, we were privy to a number of classic cuts, like “Sensorium,” “Martyr of the Free Word,” “Sancta Terra,” “Design Your Universe,” and “Consign to Oblivion.” The band would play for an hour and forty-five minutes, with only a minimal stopping for the encore (with some entertainment provided by keyboardist Coen Janssen) and a drum solo that followed live staple “Cry for the Moon,” with never a dip in the energy level – truly inspiring to watch and partake in.

Some other highlights included Mark Jansen asking the crowd to vote between “Storm the Sorrow” and “The Last Crusade,” only to decide to play both of them, and the seemingly endless stream of crowdsurfers that began to emerge as the band’s set went on (of which Simons amusingly “mothered” about making sure they didn’t crack their skulls on the front of the stage). It actually got to the point during “Unchain Utopia” that Simons “cheekily” requested the crowd ease off for the final track so the people in the front could enjoy it. Members of the audience provided plenty of enthusiasm throughout, happy to sing along, fists in the air to each track (not to mention the growing mosh pit). They seemed very eager to welcome the band back to the US.

An impressive live show to start off 2016, Epica seems to be in high demand (and rightfully so). With such late support for The Quantum Enigma, one can only hope that they’ll make a quick return once their new album is unleashed in the fall. But for now, don’t miss this tour if it hits your area!