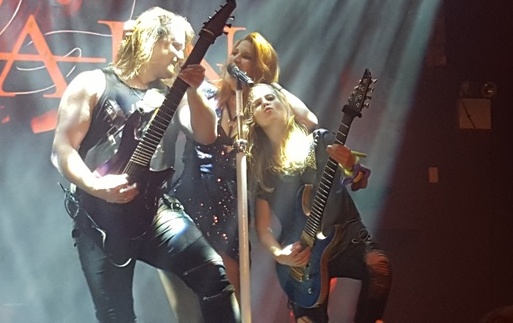 The expression ‘life gets in the way’ has applied to opportunities to catch Delain live on a number of occasions in the past few years. After the official US headlining run was announced following the release of their latest (and greatest?) album Moonbathers, it was a “can’t miss” event. Priming for the main show by catching both acts with abbreviated but highly enjoyable sets at the New England Metal and Hardcore Festival, it served only to fuel the hunger to view the entire set from both acts.

Though a chunk of local act Gothic Knights was missed due to a chat with Hammerfall, they seemed to start the night off on a good note with their particular brand of melodic power metal and excellent stage presence. The way was then paved for Hammerfall, who wasted no time in rousing the crowd to the maximum. It’s been seven years since the band toured North America, and they meant to make up for their lengthy absence tonight. The band’s set was an interesting one for sure – their time away allowed them to divulge into a number of tracks spanning their career, in an attempt to please older fans as well as new. A trio of songs from their latest release, Built to Last (“Hammer High,” “Dethrone and Defy,” and the title track), as well as two from 2014’s (r)Evolution (lead off “Hector’s Hymn” and “Bushido”) served as a recent anchor that allowed the rest of the set to pull back further, all the way back to an interesting medley of Glory to the Brave cuts meshed together in a cohesive and fun package. Some other cuts included “Last Man Standing,” “Blood Bound,” “Let the Hammer Fall” (before which vocalist Joacim Cans cajoled the crowd to shout “fall” to initiate those new to Hammerfall’s live show), and of course, “Hearts on Fire.”

High energy from start to finish in their 75-minute set, with plenty of interaction by the band with the crowd. Some fun stage theatrics as well, with synchronized guitar/bass movements and headbanging amid plenty of smiles and the promise that it wouldn’t take another 7 years to bring them back across the Atlantic. The crowd response was huge from the get-go, with fans shouting, clapping, raising their fists, and even moshing throughout the set. As only a mild Hammerfall fan when it comes to their albums, their live performance really takes the band to the next level. Top-notch showmanship and infectious charisma raises their traditional heavy metal themes into something even more compelling and monumental live.

After Hammerfall whipped the crowd into a fever, it was Delain’s turn to take over Stage 48. In contrast to the excitement shown for Hammerfall’s return to the US, Delain fans were excited for a different reason. Delain has been doing a number of support tours in recent years, and this is the first opportunity they’ve had to give fans the full headlining experience in North America (even if it’s a “co-headliner”). It was clear as the band made their way to the stage, the packed house was indeed prepared for this occasion. Starting off with “Hands of Gold,” the band charged through an excellent set of old favorites and new cuts from Moonbathers. This scribe would be perfectly okay with hearing Moonbathers beginning to end, but the rest of their chosen picks of “The Hurricane,” “Fire with Fire,” “Pendulum,” and “The Glory and the Scum” all translated quite well into the live setting, particularly “The Hurricane,” with its emotive lines allowing vocalist Charlotte Wessels to carry some added weight and power to the song. Some of the older cuts included essentials “April Rain,” “Get the Devil Out of Me,” “Here Come the Vultures,” “Sleepwalkers Dream,” “Mother Machine,” and “We Are the Others” – hard to complain about the number of excellent, fan-favorite songs in the 15-song set the band pulled out for this round.

What made Delain’s set even more special were the constant interactions between the band members. Wessels herself seemed to constantly move around the stage and engaged with everyone, particularly guitarists Timo Somers and Merel Bechtold – there was some exceptional chemistry here and the whole band was all smiles for 75-minutes. But the night’s best interaction came as Wessels approached keyboardist Martijn Westerholt at the end of a song and he stopped just short of the finish and Wessels amusingly paused and waited for him to hit the note to finish the track. The team were no slouches in terms of crowd participation either – Wessels again leading the charge for the audience to sing, jump, clap, and more at any given moment, with other members chiming in from time to time as well. The crowd, of course, was putty in their hands at their encouragement…again, the amount of smiling on stage was contagious. That sort of charisma and energy is not something you can see in every act – it’s easy to follow along with a band when it’s clear they are having the time of their lives on stage, and Delain has that “it factor” that should inspire the masses as they continue on this tour and raise their name to the next level, hopefully ensuring another headlining set to come soon. There’s something special going on in Delain’s waters, that is for sure. And it’s bound to catch on as more people are able to witness their live set.

But for now, it’s hard to argue with this co-headline package. Two different styles represented with Delain and Hammerfall but it’s also one that should make some new fans from each band with their massive stage personas and presence. Not to be missed!