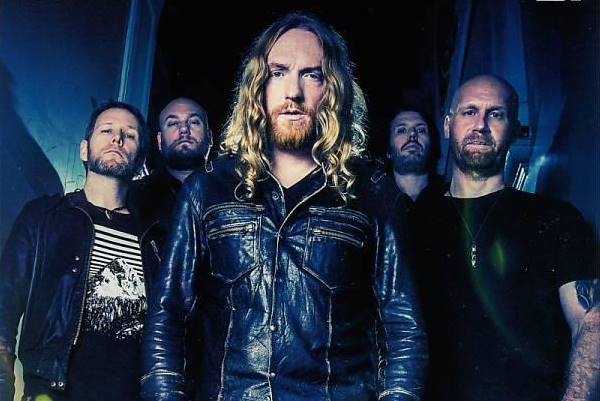 Birthdays can be a time of joy or contemplation, especially when you get beyond your 20’s. This particular tour of Sweden’s Dark Tranquillity, Finland’s Omnium Gatherum, and California’s Exmortus happened to hit my area on my 43rd celebration of being born onto this earth. A week in, you can tell all the bands have a genuine love and respect for one another, confirmed later in a brief chat with Omnium Gatherum guitarist Markus Valhala who told me ‘”The atmosphere is so easy going and laid back – this is one of the best tours with no attitudes.”

The show would take place in the upstairs venue on a Tuesday evening, with the impending 12 inches-plus snow storm scheduled to hit New England in mere hours after the show’s conclusion. Apparently some of the V.I.P.’s decided a no-show was in order, as the venue security called out eight names for the 6 p.m. meet and greet a few times before letting the general admission audience in. Why would you spend $35 dollars extra and miss that opportunity is beyond me, but by 6:40 we could enter the venue and await the opening band… a local thrash act called Nightslasher. They got three songs in before leaving the stage, but I couldn’t make heads or tails with their sound. Leads were buried in the wall of bass and drums, and it seemed like the drummer was struggling to hear his monitor as he often played ahead or behind the riffing, depending on the song.

Exmortus came on next and blew me away. They play a speedy brand of neo-classical oriented death/ thrash with a load of energy, obvious technical ability, and a pure love for the genre. Their too short set included three new songs off their recently released third album Slave to the Sword (including the title cut and “Immortality Made Flesh”) and one song each from their previous two albums. When the front-of-house soundman told the band they had time for an additional song, the band pulled out a heavier rendition of Judas Priest “Freewheel Burning.” The band entertain relentless (drummer Mario Moreno in particular adept at a lot of visual stick tricks, and guitarists Conan and David Rivera trading a few licks off of each other’s guitars in synchronicity) and should have no trouble moving up the ranks as they plan on being road dogs for quite a while.

Omnium Gatherum. What can be said about this melodic, progressive death band that hasn’t already been said by most of the scribes on this website? [I don’t think we’ve covered them. Are they new? – ed.] The sextet are genuinely enthusiastic about the reception they’ve received on their first North American tour, performing a nine-song set that leaned heavily on their new album Beyond and previous album New World Shadows, with “Nail” reaching slightly back into The Red Shift record. Favorites for me include “New Dynamic,” “The Unknowning,” and epic closer “Deep Cold.”

Vocalist Jukka Pelkonen is the ideal frontman, encouraging the crowd with chants, fists in the air, and devil horns in a variety of ways. They also brought a cake out for the 30th birthday celebration for keyboardist Aapo Koivisto. They conquered another crowd, and assured the audience this will not be the last time we see OG in North America. Fifty minutes were not enough for the dynamic atmosphere, aggression, and beauty within their arrangements.

Dark Tranquillity are one of the forerunners of the melo-death movement. So headlining is natural to them, and the audience broke out into serious pit action right from the start of their set. With 90 minutes, we received 19 songs that went all up and down their catalog. “Punish My Heaven” from The Gallery, “Monochromatic Stains” from Damage Done, “Lost to Apathy” off Character, a boatload of songs from the latest effort Construct – there wasn’t much to complain about with the selection of tracks that composed this set list. The background computer graphics went hand-in-hand with the band, and it was a rare time where I didn’t really miss the lack of a bassist in a metal group.

Stage diving appeared to be the order of the day by a lot of the attendees – some overstaying their welcome when plotting their next maneuver. Fortunately the quintet of musicians took things in stride, plowing through the songs with professional grace. Vocalist Mikael Stanne even took some time during the encore to crowd surf without missing a growled note for “Misery’s Crown.” At 11:30 p.m. as the final keyboard strains rang out, Dark Tranquillity left the fans clapping and chanting along, proof that overseas metal still has a foothold on the North American scene. I could not ask for anything more in terms of a better birthday celebration with this package.