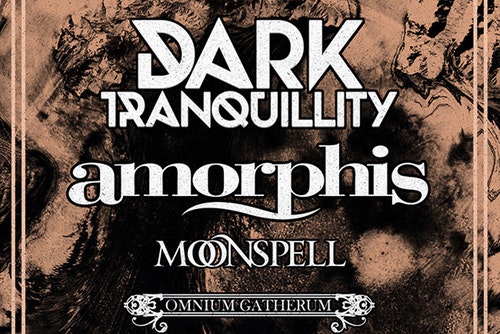 Without a doubt, one of the fall’s biggest tours for fans of a little melody in their aggression, the co-headline of Dark Tranquillity and Amorphis, with Moonspell and Omnium Gatherum in tow, combined to make a brilliant spectacle. It could be stated that all four of these bands have the capacity to make full headline runs on their own, so an entire evening of high-class metal was indeed in order. Bringing things to an end for that tour at Upstate Concert Hall on a Sunday evening, they brought things to a wrap in style.

With no local openers, Omnium Gatherum opened up the festivities with more than a bang. For a band that has been around as long as OG has, they had a youthful and hungry energy about them, all the more impressive for it being the last night of a 5-week coast to coast run. Lots of smiles, crowd encouragement, and stage theatrics from start to finish. Firing off a number of songs from their recently released The Burning Cold, “Gods Go First” and “Refining Fire” made a strong impression and fit in right alongside recent mainstays like “Skyline” and “Frontiers” as well as the excellent “The Unknowing.” It seems their North American push is starting to pay dividends, so hopefully next time we see OG, they will be blasting through an extended set.

As as the crowd continued to grow (a considerably strong turn-out for a Sunday night in the Albany region), Moonspell took their turn at the stage. With a combination that mostly centered on the classic Irreligious and the recently released 1755, there was plenty of energy for the audience to feed off of. Some enjoyable props, from glowing lanterns to plague masks and beyond also give a visual style that changed with a few of the tracks. Fernando Ribeiro has considerable stage presence and no shortage of charisma, making the band an even larger-than-life entity when they perform, and bringing things to an end effectively with “Full Moon Madness.”

Their first US run since the excellent Queen of Time, Amorphis‘ return to the US for the second time in two years was a celebrated one. A ten-song set that included 4 songs from said album, “The Bee,” “Message in the Amber,” “Wrong Direction,” and “Daughter of Hate” matched the high expectations of their studio versions. Vocalist Tomi Joutsen carries his clean and growled vocals to near-studio perfection, and the intoxicating sound of Amorphis in the live venue is one that keenly pairs up to only the strongest of metal acts. They treated the crowd to two Tales from the Thousand Lakes cuts (“The Castaway” and “Black Winter Day”) as well as a smattering of songs from Under the Red Cloud (“Bad Blood” and “Death of a King”). But perhaps the two strongest songs were that of “Silver Bride” and “House of Sleep.” Crazy to think how much time has passed since even those two respective albums (Skyforger and Eclipse) – let’s not even get started on the Tales stuff – but it’s always nice to hear a few stand-by live tracks, particularly in the band’s extensive absence from US tours. With any luck, these past two treks have convinced them to continue making North America a priority.

Last up was Dark Tranquillity, who have very much made the North American shores a touring priority in recent years. Their third headlining run on this side of the Atlantic for the exceptional Atoma album, and most likely their last until we see a new studio effort, it was just as excellent as the past two touring performances. A solid chunk of Atoma (including the title track and four others), the strength of said album is worth repeated treks in and of itself. But reaching into their extensive back catalog (from the ’00s and up that is, other than live staple “Therein”) gives the band plenty of opportunity to speed things up (“The Treason Wall”) or slow down (“The Science of Noise”) at will. Mikael Stanne continues to be the ever-impressive frontman, with the way he moves, interacts, and is genuinely enjoying himself on stage being entirely infectious. The band’s use of visuals start to finish in recent years has been an enhancement as well, providing even more to engage with while DT is performing (whether it’s music video footage or images made for the track). There’s a reason why Dark Tranquillity continue to be cherished among melodic death metal fans, and they again closed things out on this tour with another high note (hopefully to enter the studio with in the near future).