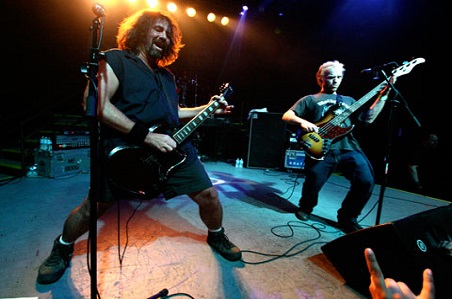 Election night was the backdrop for this evening, aligning perfectly with COC’s political bent, especially those spunky punk years. The Altar Bar had CNN blaring on its oversized TV screens, giving followers of the race a reason to divert from what was on stage. As Blistering surveyed the room, it appeared that most of the 100 or so in attendance were more concerned with socializing and enjoying some alcoholic beverages. Maybe they weren’t interested, or they were going to wait for the actual results. Who knows.

This scribe and fellow Blistering writer Dan Barkasi made it into the club as Royal Thunder were assembling. Singer/bassist Mlny Parsonz was helping her bandmates get set up, a novel concept in light of the numerous divas that permeate our scene. It makes sense, though, as Royal Thunder are the type of band made for dingy, dirty clubs, hoisted by a total DIY attitude. Their new CVIhas been a critical success, and the band has the live wares to boot, as cranked Fender amps, big-ass drums and Parsonz’s godly vocals put the audience into an immediate trance. The band isn’t as rocking as their studio output would suggest; instead, they let volume swells do the work, while Parsonz closed her eyes and unleashed some of the best female vocals going right now. Suffice it to say, Royal Thunder are on the up-and-up.

Zoroaster on the other hand, provided the necessary relaxation time for Barkasi and yours truly, as a seat on the club’s outer ridge was secured, right in line with said television screens. As the Chicago-based doom sludgers slopped through a noisy, ear-wrecking set (not of the good variety), Wolf Blitzer and co. did their best to predict certain swing states, using state-of-the-art tools (gotta love the screen CNN uses to zoom in on precincts) to call the race. Thankfully, the band’s set came to a merciless end after 40 minutes. They’re far more enjoyable on disc then in live form.

The trio formation of Corrosion of Conformity has been active since 2010, with bassist/vocalist Mike Dean, guitarist Woody Weatherman, and drummer Reed Mullin re-establishing themselves in light of Pepper Keenan’s now indefinite hiatus from the band. It appeared most in attendance were clued in on this, as a cross-section of songs from the seminal Animosity and the band’s new self-titled album did all the heavy lifting. “The Moneychangers” sent an instant rush through the crowd, as did “No Deliverance.” Mullin took over the mic for a verse of “Vote with a Bullet,” which made perfect sense given the importance of the night.

As the set wore on, the three men exchanged smiles, goofy faces, and without sounding corny, looked as if they were having quite a bit of fun. COC are survivors, and in this new, but old format, put on a carefree show, a counterpoint to the days when they had major labels breathing down their backs and their songs had more in common with Southern rock than wily punk metal. My, how things change as we get older…