Zud – The Good, the Bad, and the Damned (Self-Released) 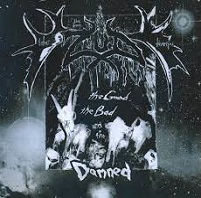 All sorts of weirdness here, starting with the Mongolian origins of Zud’s name, the meaning of which entails livestock animals getting killed off by the harsh, cold winter. Then you have the band’s Portland, ME locale, which should jump out at almost anyone given the utter lack of quality bands hailing from that region. (Then again, DR could be wrong – our trips to this part of the country are less than one.) To top if off, the band is self-described as a black metal-meets-classic rock creation…all the more reason to head into their The Good, the Bad, and the Damned debut with intrigue.

Suffering from long-song infliction, the four-piece (who only go by their first names – how black metal!) have a tendency to not know when to clip their ideas. As such, it’s no real problem to grapple with opener “Skull Shaped Bell,” but one has to contend with extra, almost unnecessary ideas tacked onto the song’s backside, which is a shame – it builds up a nice little Darkthrone/Deceased front, especially in those firm melodies. In spite of that, Zud shows a willingness to rock and boogie – “The Junction” should get some dandruff out in the air, while “Dendrite Fumes” might be the album’s most well-rounded number, stocked with 70’s-laced ideas, and the enjoyable grunt of Justin.

Had Zud made the tunes on The Good, the Bad, and the Damned more fit and trim, we’d probably be singing a different, uh, tune. But that’s what you get these days; the short, compact song is very much unhip, as a whole section of bands have it in their heads that anything under the eight-minute mark simply isn’t satisfactory. So with a little slice-a-roo to the song lengths, then more ‘bangers will be doing the dirty black metal rock ‘n’ roll boogie with Zud.