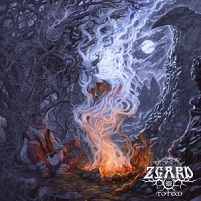 The best work usually comes from times of stress and uncertainty. Residing in a country where an overthrow of the government took place, resulting in a very tricky and difficult border war with Russia, Ukraine’s one-man Zgard has managed to channel whatever otherworldly energy sole dude Yaromisl has into a spirited body of work otherwise known as Totem. The band’s fifth album (thus, necessitating a deeper inspection into the man’s catalog), Totem is a zealous blend of blazing black metal, lush acoustic interludes, and a prevailing folk center, sending the album (and band) back to the exploratory times of the mid-90s.

This concoction of sounds is all the remarkable given Yaromisl’s distance from Ukraine’s main musical areas like Kharkov and Kiev, proving that the Carpathians, or residence near the mountain Bogit, where was located a Zbruch Idol (9th-century Svetovid sculpture and one of very few monuments of pre-Christian Slavic beliefs), are proper forms of inspiration for the album. And so goes the firestorm found on “Land of Legions” as well as “Descendants of the Thunder” where Yaromisl’s grasp of the potent black metal sideways-styled riffing comes into play. He’s an uncanny player, that’s for sure, able to demonstrate a rather firm grip on the chord wranglings so necessary to get this stuff off the group. In turn, there’s a chaotic thrust to the man’s riffs – sometimes they go for a climb (“Dark Lord of the Carpathians”) or they’re rooted deep in the worlds of folk (“Forgive Us Nature”). Regardless, it’s a near-devastating blend of full-assault BM and worldly folk.

An ace production job tops the whole thing off, presenting both Zgard and Totem as a whole as an immediate, Eastern Europe force. And don’t sleep on some of the flute happenings that are so wisely spaced across the album – they only add to an effort that is mystical and thoroughly challenging.