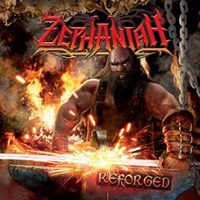 Hailing from Fort Wayne, Indiana, the Mid-West holds a mighty progressive speed metal band in the five-piece Zephaniah. Reforged is the group’s second full-length and a rebirth of sorts as the band came back after a four-year hiatus in 2014. Those who appreciate bombastic guitar heroics, and cultural/epic-oriented hooks and themes surrounding battles or favorite iconic films like Mad Max will find the 8 songs energetic, explosive, and pump up the adrenaline a hundred-fold.

Obvious reference points in taking in a lot of the Justin Zych/Shaun Cothron searing twin riffs and equally potent multi-octave melodies from singer Logan Detweiler throughout “Destiny” or “Judgement” stand at the altar of Dragonforce, Gamma Ray, Rhapsody (Of Fire), and a bit of Blind Guardian as well during their Tales from the Twilight World and prior discography. Neoclassical sprinklings cascade the air, even on the bass front for Ian Bender on solo segments during the opening title cut. Musicianship certainly is top-notch, making for prolonged instrumental sections especially in the 9 minute plus “Quest for the Royal Crown” – but there are times where the proceedings are cleaner and manageable to set up the next up tempo guitar/bass/drum flurry.

Zephaniah plays a style of music that has girth, might, and leads warriors and wizards into combat – imagine the best role playing fantasy game coming to life, and that gives you an idea of what to expect. Drummer Cody Johns has some insane time signature twists and fast feet/hands to keep up with his compatriots, often injecting some Latin and jazz percussion nuances beyond his obvious power/speed/thrash abilities. Whammy bar exercises and keyboard/ choir elements also amp up the symphonic ‘fun’ factor – as many may think Zephaniah are a little too over the top, while others get off on that very same push to the limits aspect of the songwriting and performances.

Reforged will find favor from impressionable youth and adults who love progressive speed/thrash with neoclassical and bombastic tendencies. Guaranteed to elicit smiles around bar maidens and pirates globally.