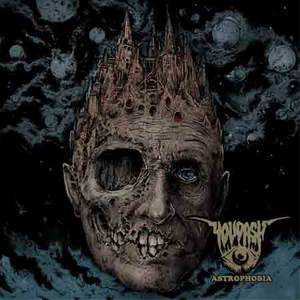 It’s a pleasant surprise to find music that genuinely defies classification. You can listen to it and it’s consistent enough that you aren’t scratching your head at what has just come through the speakers, but unpredictable in the sense that you aren’t sure what’s going to happen on the next track (or in the next few seconds). For those who enjoy their music with a twist, Youdash’s first full-length Astrophobia is an album you should get acquainted with.

Coming in with the death metal tag (which is what you’d expect given the excellent cover art), Astrophobia spreads its wings as you continue to listen to the 8 tracks that comprise it. Some light thrash accompanies a well-used introduction (pleasingly not a toss-away like many tracks of this ilk) and then “Celestial Phenomena” brings in spastic death metal fury. Plenty of time change-ups, often zig-zagging between faster and more intricate sections with some groove added to balance. Then they veer off into some more melodic territory with an almost funky break towards the end of the song. “Hunting Among the Stars” feels much more death metal driven, but then “Deathstar” initially comes off with a stoner vibe. “Force Guide” utilizes an older thrash vibe in unison with bursts of death metal brutality to create some stunning riffs that will induce some headbanging with exercising your mind. Closing things up with a cover of Acid Drinkers’ “Strip Tease,” it further adds to the diverse sounds of the album, with the band diverting from their sound over the album while giving it a spin that is uniquely their own.

It’s also worth mentioning that the production backing Astrophobia is just the right mix of raw and refined. Youdash sounds heavy as nails, yet the little things, like a rumbling bass and clear progressive leads aren’t damaged in the process. Be it progressive, technical, thrashy, or frantic – Astrophobia is a strong debut that extreme metal fans will easily sink their teeth into.